Synopsis: A hard rain is about to fall on a small town in Southern China. In a desperate attempt to find money to save his fiancée’s failed plastic surgery, Xiao Zhang, a mere driver, steals a bag containing 1 million from his boss. News of the robbery spreads fast within the town and, over the course of one night, everyone starts looking for Xiao Zhang and his money.

The animated world isn’t just made up of Disney, Pixar, DreamWorks and everything nice. We don't live in a society filled with splashes of happy and bright colours, as this Chinese animated film would attest.

After making a name with his debut feature length animation Piercing I (2000), Chinese animator and film director Liu Jian is back with this dark comedy that sheds light on a seedy town in southern China. The story starts with one million renminbi being stolen by a young driver. That’s more than $200,000 Singapore dollars, for anyone who’s attempting to do the conversion. The man’s intent is commendable – he wants to use the money to pay for a trip to South Korea so his girlfriend can rectify a botched plastic surgery. Cue the entry of mafia bosses, hit men, gangsters who want to retrieve the fortune for different reasons.

Oh yes, there will be blood.

With characters criss crossing each other’s paths, one can imagine auteur Quentin Tarantino making a live action version of this film with lots of gratuitous violence and a kick ass soundtrack. Closer to home, this can be imagined as a gangster flick starring Chow Yun Fat, Simon Yam and Francis Ng. Yet, there is something about Liu’s film that makes it a low key charm.

You can see the effort put into making the film. Liu, who studied painting at Nanjing University of the Arts, did most of the work himself and took three years to complete this work. The artwork is meticulous, the choice of colours reflects the downtrodden side of society, and the animation is kept basic. The result plays out like a surreal graphic novel that wants to tell a tale of human’s true nature.

The story succinctly told in 77 minutes, and that’s something worth applauding in this day and age where indulgence is aplenty. We understand what we are watching in Singapore is the film’s original version, instead the cut that passed Chinese censorship with “slight adjustments”. This arose from the controversy last year when the film was withdrawn from the Annecy International Animated Film Festival as it did not have proper governmental clearance to be screened internationally.

We also love the modern references to pop culture and politics in the film. You hear The Godfather being discussed, and see posters of Rocky and The Hunger Games. Pay attention and you will smile at how Liu worked mentions of the Taiwan map, the British exit from the European Union, as well as Donald Trump’s congratulatory message to Hilary Clinton into the screenplay.

This is not a pessimistic piece of work, and you need not worry that everything is drab, dreary and depressing. There are cheeky elements in this dark comedy – see how a man’s ridiculously self invented X ray glasses brings him trouble instead of wealth, and hum along to a hilarious fantasy sequence where a woman dreams of moving to the picturesque Shangri La in China’s Yunnan Province.

A quote from Russian writer Leo Tolstoy’s Resurrection opens the film. Although the novel is known to explore the hypocrisy of the institutionalised church, the last line on screen “spring, however, was still spring” brings about a sense of hope. This is the tingling feeling you will get when the film ends.

Liu’s highly recommended film has made its mark internationally. It was the first Chinese animated feature to premiere in the main competition for the Golden Bear at the 67th Berlin International Film Festival. At the 54th Golden Horse Awards, it was nominated for Best Original Screenplay and Best Original Song (Old Beast and The Great Buddha+ won in the respective categories), and took home the Best Animated Feature prize. We can’t wait for what Liu will come up with next. 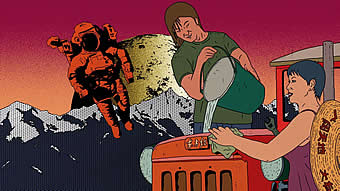