Synopsis:  It was 1917, China. CHENG (Chow Yun-fat) was an innocent young man who worked in a grocery store and had no ambition, other than to be with his lovely neighbor, the Peking Opera student QIU.

But a fateful night had changed Cheng’s life forever, as he literally walked right in the affair between his lady boss and the chief of police. To hide this secret, the chief decided to throw Cheng into prison, accusing him of raping his lady boss. Desolated, Cheng met a cellmate MAO, who happened to have an escape plan. The duo broke out, and Cheng had no choice but to leave his life, and his dream girl behind.

Cheng found a job as a bouncer in the casino owned by the powerful inspector JIN (Sammo Hung). As Jin indulged himself in debauchery all day long, Cheng began to climb up the underworld ladder step by step…

Just when you thought that Wong Jing’s heydays are over, the (in)famous veteran filmmaker returns with his best film in recent years. Not just that, Wong Jing’s latest also boasts veteran actor Chow Yun Fat’s best performance of late, harking back to the days when the boyishly handsome actor was the heartthrob of many with his classic gangland action thrillers ‘A Better Tomorrow’ and ‘The Killer’.

‘The Last Tycoon’ sees Wong Jing directing Fat-gor as Cheng Daqi, an ambitious man from a humble background who aspires to be a person of wealth, power and status. Co-scripted by Wong Jing, Manfred Wong and Lui Koon Nam, it tracks the rise of Daqi from his days as a lowly fruit seller to his ascent as one of the most powerful mob bosses in Shanghai to his instrumental role as a member of the resistance against the Japanese occupation circa 1937.

It is a bold undertaking no doubt, not least for the fact that Wong Jing needed to create a character that would be at least as comparable to the one that Fat-gor had once played in the iconic 1980s TVB series ‘The Bund’. Thankfully, Jing approaches the material with more ambition than he has shown in all of his recent films combined. Indeed, ‘The Last Tycoon’ is at once a love story, an espionage thriller and a gangland drama – and the combination of all these genres makes for a riveting package that is solid blockbuster entertainment.

In that process, Wong Jing adopts a character-driven approach to his leading character Daqi – and if you’ve followed any of his numerous films, you’ll agree that the statement in itself is already a compliment. Among the various facets of Daqi, Wong Jing pays most attention to two – one, Daqi as a man devoted to the women he loves; and two, Daqi as a person of loyalty.

The former gets prominent play especially in the first half of the film, when a young Daqi (played by Huang Xiaoming) is separated by circumstance from the girl he loves Ye Zhiqiu (newcomer Joyce Feng) but does not give up in finding some way that they can get back together again. After successfully reconnecting with Zhiqiu in a church, the two are set upon by an unknown group of gunmen who are presumably Daqi’s enemies – and that perilous encounter leaves Zhiqiu shaken and determined not to see Daqi again.

But of course, their lives become intertwined yet again when Daqi rises to become the powerful tycoon of Shanghai’s most prestigious nightclub ‘The Grand Shanghai’ – though Daqi is now married to Ah Bao (Monica Mok), while Zhiqiu (her older self played by Monica Mok) is married to a leading member of the underground resistance Cheng Zaimei (Xie Baoqing). Their love triangle unfolds against the backdrop of the Japanese invasion in 1937, and even if the ensuing scenes are played up for melodramatic effect, Fat and his two beautiful actresses bring conviction and poignancy to their star-crossed relationships.

Parallel to their tragic wartime romance is the tale of Daqi’s loyalty, first to his master and sworn brother Hong Shouting (Sammo Hung) and then later on to his country. Instrumental to that part of the story is Mao Zai (Francis Ng), an influential leader from the armed forces that Daqi first meets when he is wrongfully imprisoned for the murder of his buddy and then when he climbs to power in Shanghai. The intertwining fates of Daqi, Shouting and Mao Zai are told grippingly with tight scripting and assured direction from Wong Jing, culminating in a tense half-hour finale that tests the allegiances of each one of these characters.

It is no overstatement to say that the powerhouse combination of Chow Yun-Fat, Sammo Hung and Francis Ng pretty much ensure that this dramatic story angle is worth the price of admission. Clearly relishing the opportunity to share the screen together, their interplay is crackling – and even a simple scene with three of them seated together at dinner with Mao Zai attempting to persuade both Daqi and Shouting to contribute to the anti-Japanese effort pulses with tension, energy and charisma thanks to the ensemble acting.

Further to Wong Jing’s credit, it isn’t just to the characters played by the topline cast that he has given due attention to. Supporting roles like Daqi’s knife-wielding bodyguard Lin Huai (Gao Hu) and Shouting’s quiet but firm wife (Yuan Li) are also surprisingly well fleshed out. Kudos to Wong Jing for carefully delineating the bevy of lead and supporting characters and their relationships with one another, so that none end up lost amidst the intricate plot developments.

Yet this review cannot be complete without a mention of the film’s flaws, of which there are two major ones. The first is Wong Jing’s propensity for slo-mo shots, deployed too frequently either in some action scene to make the characters look ‘cooler’ (in particular, Chow Yun-Fat’s gun-wielding posture) or in some emotional scene to accentuate the histrionics.  The other is his over-indulgence for onscreen explosions – especially an almost ten-minute long sequence which shows the Japanese’s aerial bombing of Shanghai that goes on for at least five minutes too long. Anyone who’s seen a Wong Jing movie knows that he is not a man of subtleties, and ‘The Last Tycoon’ is no different.

But for all his excesses, Wong Jing has as his ace none other than Chow Yun-Fat himself. Fat-gor must have known the pressures of stepping into a role and a movie that will immediately invite comparisons with one of his most iconic, but that gamble has paid off handsomely here. His commanding yet nuanced performance carries the movie throughout, and even though the years have caught up with him, his acting has matured like fine wine, so much so that we’d proclaim it pure cinematic enchantment.

Certainly, we had little doubts that Chow Yun-Fat as a gangland boss would be dazzling, but as we said earlier, the real surprise is how this big-budget drama sees Wong Jing at his best. Not only has he written a compelling story, his direction is also at his most confident, navigating the complex plot with fluidity and flair. Those who have followed Wong Jing’s prolific filmography will know that he has had numerous ups and downs, but ‘The Last Tycoon’ sees him achieve yet another creative zenith. It also marks a high note for Hong Kong-China collaborations, counting surely as one of the best fusings of talent from both ends. Grand and gripping, it is a perfect example of the blockbuster entertainment that Chinese cinema has to offer.

(Chow Yun-Fat’s return to ‘The Bund’ is grand and gripping blockbuster entertainment, as well as Wong Jing’s best movie in a long while) 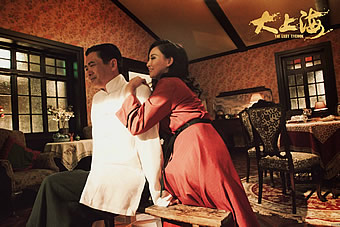