Synopsis: Big F and his gangsters dress their minibus to resemble a police vehicle, and pose as policemen for a robbery. Police Officer Chui has sensed “criminal intent”. Without police orders, he investigates these gangsters. At the robbery the gangsters engage in a gunfight against the real criminals, who kill randomly. Big F and his men are infuriated. They may wear police costumes and use toy guns, but their passion is real. Sensing their righteous passion, Chui decides to side with the imposters and their 16-passenger EU vehicle. Big F and his men re-discover the bond they felt when they used to battle together. Finally, Chui, Big F and the gang defeat the criminals, showing Chui that anyone can be a hero, and righteousness resides within us all.

Hong Kong cinema is known for its ‘cops-versus-robbers’ thrillers, but Lau Ho-leung’s directorial debut wisely skewers genre expectations for a darkly funny comic romp. Taking the point of view of the ‘robbers’ rather than the men-in-uniform, Lau tracks the misadventures of a bunch of low-rent ex-cons who reunite for that one final heist, which is to rob a delivery van transporting corpses from across the border that are stuffed with cash.  Their grand plan? By disguising a public 16-seater red minibus as a police Emergency Unit vehicle and dressing up as police officers.

However, as Francis Ng’s Big F will tell you right at the start, they are not the only ones who have the same design. A rival gang of criminals (led by Philip Keung) also plan to rob the same van, though with an actual de-commisioned EU vehicle and much bigger firepower. Over the course of one fateful Halloween night, our four anti-heroes will become heroes in their own right, discovering their sense of justice as they not only rescue a young girl from their fellow outlaws but literally live up to their uniforms by taking the law into their own hands. Like we said, this isn’t your straight-forward ‘cops-versus-robbers’ shoot-em-up, but hey that is precisely its gonzo charm.

Like Johnnie To’s ‘The Mission’, the camaraderie between the bunch of loveable oddballs gives the film its own character. Big F has just returned from a sixteen year stint in a Malaysian prison, his mullet quite a spectacular sight to behold. Crazy B (Simon Yam) complements him with a demi-afro, his latest employment as a lowly paid attendant at a bowling alley. Johnnie T is a hair stylist at a back alley, his regular clientele mostly hostesses and prostitutes. And last but not least is East L (Mark Cheng), the most respectably employed of the lot who drives his own minibus – it is riding on East L’s public transport vehicle that Big F gets the idea of playing dress-up after a real EU van pulls up alongside theirs at a traffic junction.

Afraid that his audience may miss the character nuances, Lau gets an eagle-eyed junior officer Tsui (Leo Ku) to describe each one of their distinct personality quirks as he picks up the pieces of their criminal preparations. Big F is brash and a penny-pincher. Crazy B is shrewd and methodical. Johnnie T is slightly OCD. East L is the most loyal of them all. Frankly, Tsui’s voiceovers aren’t necessary, and betray the insecurities of a first-time director. Indeed, he need not have worried - in no small measure due to the effortless chemistry between the veteran male actors, there is much vim and vigour in the interplay between Big F, Crazy B, Johnnie T and East L to convey the same.

The first act not only sets up the crime but also the dynamic between the four partners-in-crime, and it is clear from these scenes that despite their petty squabbles, there is a fundamental bond of brotherhood that binds them together. Because they are such great fun to be with, Ku’s sharp-nosed officer almost comes across as an unnecessary distraction – though, to Lau’s credit, he does give the character some shading as a strait-laced man of the law who can’t quite grasp the ambiguities in his profession. Lau also gives Tsui greater purpose in the narrative in the second and third acts, as the latter’s fate becomes intertwined with that of Big F’s crew and the hard-nosed baddies on and around the deserted mountainous terrain of the New Territories.

What ensues pretty much plays out like a cat-and-mouse-game, as Big F and his rival in crime trade barbs, threats and insults while each holding on to something and someone that the other wants – the former with not just the cash that the latter came for but also his girlfriend; and the latter holding Johnnie T hostage at the back of his EU van. Their battle of dimmed wits is told with an offbeat exuberance, with some generous – but still judicious – use of comic-book like split screens, superimposed animation and a jaunty soundtrack to add to its irreverent tone plainly clear from its plentiful use of profane humour (some of which is lost in the Mandarin dubbing, but is still discernible from the subtitles) – and it is just as well then that the CGI, especially in the last standoff, looks just as grungy.

It is perhaps understandable that Lau is a better writer than a director. Unlike Fruit Chan’s equally eccentric ‘The Midnight After’, Lau can’t quite keep the crazy vibe from slacking in the second act. His framing of the mise-en-scene is also at times awkward, especially his occasional reminders of the citywide cockroach infestation which the movie opened with and which remains only tangentially relevant to the main story. From a scripting perspective however, the subtext is somewhat inspired, and one need not read too hard between the lines to see what Lau is trying to say about the local police force or about ‘Mainland corpses bloated with money’. The way the main narrative intersects with the subplots, most notably an ice-cream seller who Big F’s crew rescues from two rapists, could also do with some finesse; as it is, these melodramatic moments are tonally incongruous with the rest of the outlandish plotting.

Indeed, ‘Two Thumbs Up’ has its flaws, and probably would do better with a tighter cut, but there is something inherently delightful and admirable in Lau’s directorial debut in its refusal to succumb to genre stereotypes as well as its amusingly anarchic attitude. It is one of the most original ensemble pieces to come out of Hong Kong cinema in recent years, anchored of course by superb performances from Ng, Yam, Tam and Cheng. At a time when so many Hong Kong films are accused of diluting their identity in order to break into the Mainland market, this comes as a refreshing breath of fresh air, and accordingly deserves a reception worthy of its title.

(Quintessentially Hong Kong in both humour and character, this non-conformist take on the typical ‘cops-versus-robbers’ genre is amusingly and exuberantly offbeat) 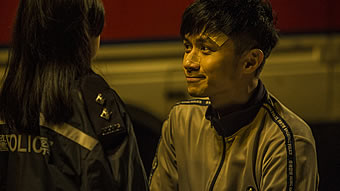 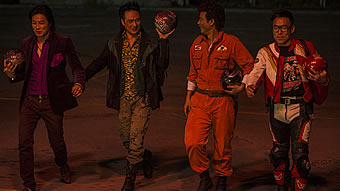 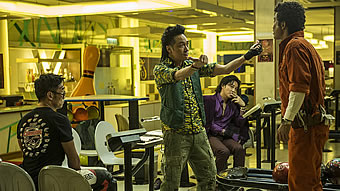