Synopsis: In Marvel Studios’ “Thor: Ragnarok,” Thor is imprisoned on the other side of the universe without his mighty hammer and finds himself in a race against time to get back to Asgard to stop Ragnarok—the destruction of his homeworld and the end of Asgardian civilization—at the hands of an all-powerful new threat, the ruthless Hela. But first he must survive a deadly gladiatorial contest that pits him against his former ally and fellow Avenger—the Incredible Hulk!

When English rock band Led Zeppelin’s Immigrant Song played over a scene in the movie’s opening sequence, we had a hunch that the 17th film of the Marvel Cinematic Universe (MCU) is going to be awesome. The 1970 song, which features a repeating riff and lyrics referencing to Norse mythology, was aptly used in the movie’s first trailer.

Using the classic rock tune in the actual movie is, in our humble opinion, an ingeniously apt move.

We are glad that our inkling was right – the superhero flick is a refreshing Marvel movie we all hoped it would be. More importantly, it is enjoyable and funny – something films of this genre is lacking these days (ahem, we are looking at you, Batman v Superman: Dawn of Justice).

The movie, which is also the sequel to 2011's Thor and 2013's Thor: The Dark World, sees the God of Thunder trapped on an alien planet without his powerful hammer. Back home at Asgard, a ruthless Goddess of Death is threatening to destroy everything and Thor has to find a way to stop it. It doesn’t help that he finds himself pit against the Hulk, someone he refers to as a “friend from work”.

This 130 minute movie is a joy to sit through. Chris Hemsworth (Ghostbusters) reprises his role for the fifth as the crown prince of Asgard and it’s a relief to see the actor having fun with the role (check out that cool haircut!).  Other familiar faces include Tom Hiddleston (Kong: Skull Island) as Thor’s adoptive brother Loki, Idris Elba (The Dark Tower) as the all seeing and all hearing Heimdall, Anthony Hopkins (Transformers: The Last Knight) as Thor’s father Odin and the ever reliable Mark Ruffalo (Now You See Me 2) as Bruce Banner/ Hulk.

The additions to the franchise are splendid choices: Cate Blanchett (Carol) is gleefully malevolent as the antagonist Hela, Jeff Goldblum (Independence Day: Resurgence) is indulgently campy as the pleasure seeking Grandmaster, Tessa Thompson (Creed) is believable as the tough and hard drinking ally Valkyrie and Karl Urban (Pete’s Dragon) adds a human touch as the rogue Asgardian warrior Skurge.

The ensemble cast seemed to have a blast working on the movie, probably thanks to New Zealand filmmaker Taika Waititi’s direction. Viewers who have seen the 42 year old’s previous works What We Do in the Shadows (2014) and Hunt for the Wilderpeople (2016) wouldn’t be surprised with the approach taken for this blockbuster - it is fun, entertaining full of jokes and has the occasional quirky heartwarming moments.

You might think the writing team behind Guardians of the Galaxy and its sequel are responsible for this movie’s high level of energy, but the story (Craig Kyle, Christopher Yost, Eric Pearson) and screenplay (Pearson) have a sense of sturdiness that gives this title an edge.

Kudos to the big budget, the popcorn movie is also spectacular to look at on screen. With its outlandish splash of colours, there is an old school feel to the film. The 3D effects are glorious, Javier Aguirresarobe’s (The Promise) cinematography exudes grandeur and Mark Mothersbaugh’s (The Lego Ninjago Movie) score drips with vintage rock coolness.

When the addictive Immigrant Song plays over one of the finale’s epic battle scenes, we are assured that this is an awesome entry in the MCU that deserves to be a cult classic. 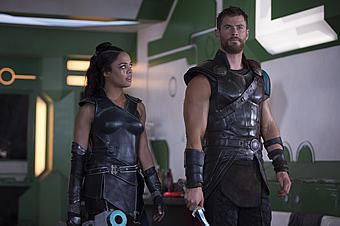