Synopsis: Paramount Pictures and Marvel Entertainment present the epic adventure, "Thor," which spans the Marvel Universe from present day Earth to the realm of Asgard. At the center of the story is the mighty Thor (Chris Hemsworth), a powerful but arrogant warrior whose reckless actions reignite an ancient war. Thor is cast down to Earth by his father Odin (Anthony Hopkins) and is forced to live among humans. A beautiful, young scientist, Jane Foster (Natalie Portman), has a profound effect on Thor, as she ultimately becomes his first love. It's while here on Earth that Thor learns what it takes to be a true hero when the most dangerous villain of his world sends the darkest forces of Asgard to invade Earth.
Movie Review:

The Norse god Thor is admittedly one of Marvel’s second-league superheroes, but just like Iron Man, both are inevitable steps in Marvel’s continuing march towards arguably the most highly anticipated comic book adaptation in movie history next year- “The Avengers”. Yet, if there’s anything to learn from the “Iron Man” experience, it’s that it’s entirely possible to turn a B-league superhero into an A-grade feature film with just the right star and the right director.

And kudos to the Marvel team for doing it once again with “Thor”, a thoroughly entertaining blockbuster of a film that succeeds thanks to the unlikely choices of Kenneth Branagh as director and Chris Hemsworth as the star of the titular character. Kenneth is the English director best known as cinema’s foremost exponent of the Bard, while Chris is the Australian actor probably only known as the father to James T. Kirk in last year’s “Star Trek”. Both are equally unlikely choices to headline this US$150mil tentpole, though Marvel’s gamble has paid off handsomely.

Unlike Iron Man, Incredible Hulk, or for that matter the upcoming Captain America who were products of science, Thor was the hammer-wielding alien-god who was always going to be a tricky proposition adapting for the big screen. After all, the combination of Norse mythology and science fiction could easily have degenerated into kitschy camp, so it’s a good thing that Kenneth knows when to get serious and when to have fun. He films the scenes of Thor in his homeland Asgard with the utmost gravitas, while leaving the humour for his brief fish-out-of-water stint on Earth.

Indeed, Kenneth handles the power feuds and sibling rivalry with the same intensity as he would a Shakespearian production, and brings a deeply human perspective to his godly characters. In particular, the tussle between father and sons is emotionally charged- whether Odin’s heartbreak at banishing his son Thor, whom he was about to coronate as king, out of the kingdom for arrogantly and impetuously reigniting a war with an ancient enemy; or Loki’s confrontation with Odin about his true origins- and therefore electrifying to watch.

To add weight to the proceedings at Asgard, Kenneth brings in two excellent character actors alongside Chris- Anthony Hopkins and Tom Hiddleston. Anthony’s patriarchal role isn’t new for the actor, but he delivers a restrained yet powerful and dignified performance as Thor’s father Odin. Tom, on the other hand, is deliciously snarky playing the sibling jealous of Thor’s impending ascension to the throne, and the British actor gives a surprisingly intimate and affecting villainous turn that brings unexpected depth to his character.

There’s also an intercelestial romance thrown in for good measure, as Thor and Jane develop a growing attraction for each other. But more than just obligatory, the love between god and human becomes a lesson in humility and self-sacrifice for the fallen Thor to pave his restoration back to glory. Though thinly written, Portman makes the best out of her role, and it is to her credit that Jane becomes an engaging and believable character that the audience roots for. Portman also shares a warm chemistry with Chris, which brings poignancy to their relationship as well as Thor’s subsequent transformation.

Thor’s time on Earth is also used to forge the necessary narrative links with “The Avengers”, in the form of Clark Gregg’s S.H.I.E.L.D. agent Coulson, an unbilled cameo by Jeremy Renner as the archer Hawkeye, and Samuel L. Jackson’s Nick Fury appearance right at the end of the credits. Fans of the Thor universe from the comic books will also delight in the awe-inspiring presence of Heimdall (Idris Elba), as well as Thor’s entourage of Asgard warrior pals Sif (Jaimie Alexander), Volstagg (Ray Stevenson), Fandral (Josh Dallas), and Hogun (Tadanobu Asano).

These pals also add colour to the action sequences, which Kenneth choreographs with surprising aplomb. He stages a thunderous battle very early on as Thor leads an attack against the Frost Giants on the planet of Jotunheim with every bit of might and muscle one would expect from a clash of godly beings. There are at least two other money sequences- Thor’s duel with a hulking piece of metal known as the Destroyer (which Coulson first tongue-in-cheek mistakes to be one of Stark’s equipment) in a small New Mexico town; and the thrilling climactic battle between Thor and Loki back on Asgard.

The latter takes place around Heimdall’s Observatory, the celestial portal connecting the various realms, which is just one of production designer Bo Welch’s visual triumphs that includes the gleaming utopian-like world of Asgard and the icy wintry landscapes of Jotunheim. Also deserving of mention is Haris Zambarloukos’ lensing, which complements Bo’s designs with an impressive stereoscopic vision that gives the action and the visuals the added dimensional quality.

But the star that holds it all together is really Chris Hemsworth, his performance a well-calibrated blend of brawn and heart that will put sceptics to rest. His physicality is apparent right from the start, but Chris gradually reveals a winning charm and a heartfelt sincerity that enables his audience to relate with his character’s inner struggles. It is a breakout star-making turn, which shows Chris adept at action, comedy and even romance.

And certainly, it is to Kenneth Branagh’s credit that these disparate elements can belong so comfortably in a movie that also combines mythology and science fiction. True to its origins, “Thor” is nothing less than superhero entertainment, and a definitive A-list one -despite the initial regard of its source character- that kicks off this summer with a bang, boom and rumble. 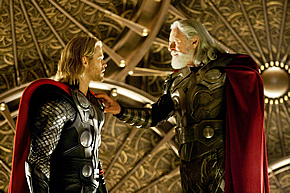 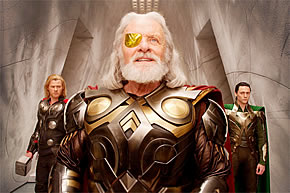