Synopsis:  Marvel's "Thor: The Dark World" continues the big-screen adventures of Thor, the Mighty Avenger, as he battles to save Earth and all the Nine Realms from a shadowy enemy that predates the universe itself. In the aftermath of Marvel's "Thor" and "Marvel's The Avengers," Thor fights to restore order across the cosmos...but an ancient race led by the vengeful Malekith returns to plunge the universe back into darkness. Faced with an enemy that even Odin and Asgard cannot withstand, Thor must embark on his most perilous and personal journey yet, one that will reunite him with Jane Foster and force him to sacrifice everything to save us all.

Like ‘Iron Man 3’, ‘Thor: The Dark World’ finds us reunited with the hammer-wielding Norse demigod in a post-Avengers world, where - for the benefit of those who may not remember - Loki was last seen returned to his home planet of Asgard in manacles after wrecking half of New York following a megalomaniac plot to take over Earth. And so, picking up right after the events of that movie, one of the very early scenes has Loki meeting his stepfather and King, Odin (Anthony Hopkins), expressing absolutely no remorse for his actions before being committed to a glass-walled whited-out cell in the dungeon.

It’s a huge pity we say, keeping Loki locked up for pretty much the first hour of the movie; indeed, the best moments of ‘Thor: The Dark World’ are when Thor and his vengeful adopted brother Loki share the same screen, forging a shaky alliance to take down a common enemy that has united them (surprisingly) in grief. Thanks to their combined charisma, this sequel defies the second-act doldrums of most movies, truly coming to life at the halfway mark - beginning with Thor’s treacherous plan to spring Loki out of prison (with the help of his pals of course) and continuing on to the black dunes of Svartalfheim where the squabbling siblings confront their foe.

Yet, not to get ahead of ourselves, there is of course a fair bit of scene-setting that needed to have taken place in order for our favourite hero and anti-hero to be brought together under those circumstances. Working from a story from Don Payne and Robert Rodat, screenwriters Christopher L. Yost, Christopher Markus and Stephen McFeely spin a Tolkiensque plot where the leader of an antagonistic alien race, Malekith (Christopher Eccleston), returns to plot the destruction of the Nine Realms using an all-powerful source of dark matter known as the Aether.

Long story short, a once-in-5000-years cosmic occurrence is about to converge the realms across time and space, which inadvertently causes Thor’s Earthly love interest Jane Foster (Natalie Portman) to fall into a different realm when investigating the phenomenon and be infected with the Aether. Malekith wants her, so Thor jumps to her rescue to bring her back to Asgard - though the price of his half-valiant and half-selfish (after all, he does want to be close to her) act is laid bare when Malekith arrives at the kingdom and launches a deadly assault on Odin’s palace.

Switching back and forth between Asgard and Earth, the trio of Yost, Markus and McFeely clearly struggle to find a consistent tone especially at the start. While the threat facing Asgard is treated with the utmost seriousness and solemnity, the proceedings back on Earth unfold with strained humour - whether the awkwardness between Jane’s understudy Darcy (Kat Dennings) and her new intern Ian (Jonathan Howard), or even the odd behaviour of Jane’s old mentor, Dr. Erik Selvig (Stellan Skarsgard), who goes butt naked in public at the Stonehenge. Between the two, we are much better off at Asgard, where veteran ‘Game of Thrones’ director Alan Taylor is on more familiar territory.

It is also at Asgard that Taylor will stage the film’s first stunning setpiece, which culminates in the turning point that sees Thor and Loki form that unlikely partnership. Malekith’s assault on Asgard is staged with impressive clarity, starting from their stealth crossing at the Bi-frost bridge to their aerial attack of Asgard’s defences to their storming of Odin’s palace. There is little doubt Taylor’s experience on the HBO series has placed him in good stead here, and more than previous director Kenneth Branagh, he demonstrates a boldness and imagination to stage the action on a much larger canvas.

That is also a nice segue into the reunion of Thor and Loki, which proves rewarding not just in the witty energetic banter that follows but also in yet another wowing setpiece that has the pair teaming up to outsmart Malekith. There is also crackling tension between them, especially since one knows better from the events of ‘Thor’ and ‘The Avengers’ than to trust the scheming Loki to have abandoned his insatiable thirst for power and position. Unfortunately, Loki doesn’t quite have a place in the nonetheless outstandingly conceived finale set in Greenwich, London; that said, what adrenaline Loki’s return brings to the film is still very much intact by the final showdown rolls around.

Kudos to Taylor for putting up not just a thrilling, but also an extremely fun exercise in physical displacement at the climax, as Thor pursues Malekith across multiple dimensions in the midst of the convergence. Rather than just visual spectacle, there is good tongue-in-cheek fun to be had as the characters appear and disappear from one realm to another without forewarning - and we especially like that one which ends up with Thor taking the Tube three stations from Charing Cross to Greenwich. Unlike Christopher Nolan’s superhero screen incarnations ‘The Dark Knight’ and even ‘Man of Steel’, Marvel has never failed to find humour in the midst of spectacle, and this enormously entertaining finale is a great example of that.

And yet compared to Branagh’s origin story, there is still something lacking in this sequel. For one, the narrative isn’t quite as compelling this time round - especially as Malekith proves quite the underwhelming villain. For another, it lacks the humanity that made its predecessor something more - and by this we mean not just the bond between Thor and Loki, but also that between Thor and Jane. Still, you cannot fault the assuredness of the performances by Chris Hemsworth and Tom Hiddleston, nor for that matter the action, otherworldly grandiosity and occasionally well-placed humour that makes it an overall crowdpleaser - if anything, it proves the Marvel juggernaut continues to be very much in shape, no less evident from a mid-credit and a post-credit scene that will have its fans in rapture.

(Not quite as compelling nor emotionally engaging as its predecessor, this post-Avengers sequel still packs plenty of jaw-dropping action and some well-placed humour to make an entertaining crowd-pleaser) 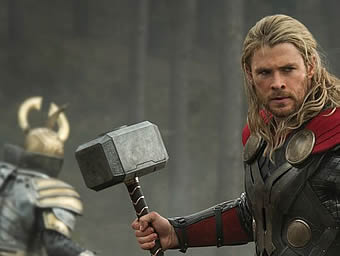 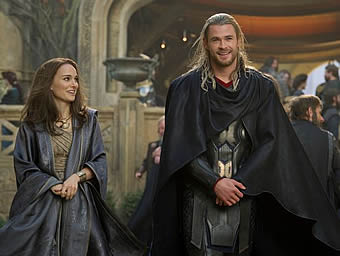 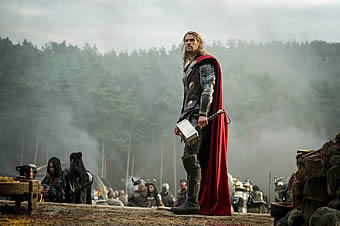 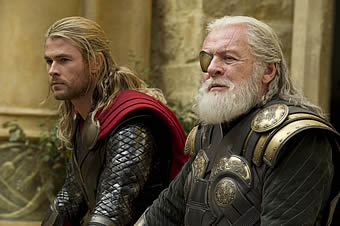