Synopsis: Escape From Pretoria is the true story of Tim Jenkin (Daniel Radcliffe) and Stephen Lee (Daniel Webber), young, white South Africans branded “terrorists”, and imprisoned in 1978 for working covert operations for Nelson Mandela’s banned ANC. Incarcerated in Pretoria Maximum Security Prison, they decide to send the apartheid regime a clear message and escape! With breath-taking ingenuity, meticulous surveillance, and wooden keys crafted for 10 steel doors, they make a bid for freedom... Beyond a thrilling will-they-won’t-they-escape, this is the story of an oppressed majority’s struggle, and two ordinary men who stood-up to be counted in the pursuit of equality for all.

After the success of Harry Potter, Daniel Radcliffe continues to challenge himself in numerous indie projects over the years. For sure, he might be dirt rich but you can’t deny his passion for acting. In this movie funded and shot in Australia, Radcliffe plays Tim Jenkin, a political prisoner who managed to pull a prison break in 1979 after being sentenced to 12 years imprisonment for being an anti-apartheid activist.

In short, Escape from Pretoria is based on Jenkin’s memoir published back in 1987. However, director Francis Annan has no desire to give audiences a lengthy lesson on the dark history of South Africa, a time where racial discrimination is focused heavily on non-whites and a time when Nelson Mandela was still in jail after being labelled as a terrorist.

Again, the movie lacks any significant backstory to the past regime except some brief archival video footages in the opening scene. Some of the shots might be brutal but if you are not a historical buff, it doesn’t have much effect on you, isn’t it? So what’s left for Escape from Pretoria the movie? Instead of some rousing history, what we have in the end is the detailing of how Jenkin together with his best friend, Stephen Lee (Daniel Webber) and a fictional Frenchman, Leonard (Mark Leonard Winter) escaped from prison using nothing but wooden-made keys.

Inevitably, the narrative is too simplistic to have an emotional punch. We knew neither Jenkin or Stephen before they are thrown into prison. All we saw was their act of planting leaflet bombs in the heart of Cape Town. What motivates them to fight for the underprivileged blacks? What’s their roles in the African National Congress (ANC)?

We got none of the satisfying answers we want instead what we have are a lot of closeup shots of keys and keyholes. In an era where surveillance cameras are nowhere to be seen or yet to be invented and security in prisons are lax, Jenkin begins to study keys hanging on the prison officers and keyholes on gates and doors. Thus he begins to replicate them in wooden forms hoping to one day navigate out of the complex layout.

While Escape from Pretoria is definitely not an edge-on-your-seats type of thriller, it does have a couple of tense moments such as Jenkin dropping his key along the hallway and the officers trying hard to find what he is up to in his cell. The heavily-accented fake South African accents might be hard to figure out at times but the often jittery, sweaty body language are enough to convey the overall uneasiness.

Putting on a horn-rimmed specs and a bushy moustache, Radcliffe is totally immense in his role as Tim Jenkin. The movie needs a marquee name liked him to sell and he is totally wonderful right here. Harry Potter fans will sort of recognised Professor Quirrell (Ian Hart) as fellow old-timer prisoner, Denis Goldberg who acts as the guys’ protector and advisor.

Escape from Pretoria is not exactly a bad movie. It works effectively as a harrowing jailbreak tale but dig deeper, it lacks the nuances of a political thriller. Of course, it does feature a very solid Daniel Radcliffe unfortunately the rest of his co-stars are too plain to serve any purpose. 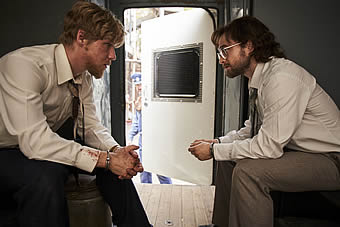 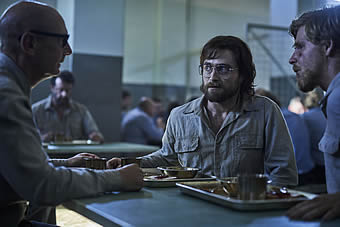 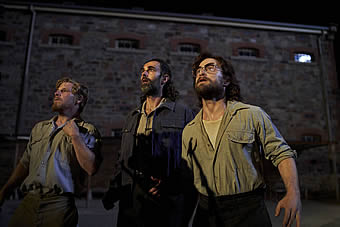 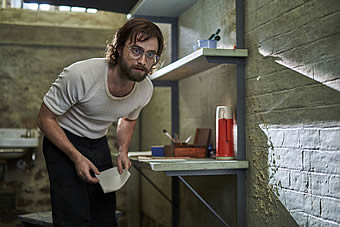 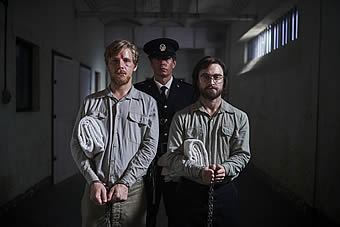