Synopsis: An FBI agent goes undercover and joins a white supremacist group in order to expose a sizable terrorist plot to create a dirty bomb. The bright up-and-coming analyst must confront the challenge of sticking to a new identity while maintaining his real principles as he navigates the dangerous underworld of white supremacy.

No actor has worked so hard to shed his or her former screen character than Daniel Radcliffe, who in his post-‘Harry Potter’ days has played a farting corpse, a devil-horned possessee, Frankenstein’s Igor and Allen Ginsberg. His latest sees the actor play a smart but undervalued fresh-faced FBI agent who goes undercover to infiltrate a group of White supremacists, a role which Radcliffe dives into by shaving his head, marching with neo-Nazis, greeting passers-by on the street with a stiff-armed ‘Zeig Heil!’ and spewing racial profanities at Jews. It is wholly believable to say the least, thanks to a carefully intense and fully committed performance by the British actor that immerses you into a bleak, often unseen, reality in American society, which writer-director Daniel Ragussis brings to life in tense, gripping and often disturbing ways in his debut big-screen feature.

Inspired by the career of former FBI agent Mike German, who specialised in infiltrating extremist groups, ‘Imperium’ sets up a plot beginning with the disappearance of some dangerous radioactive material that has the Bureau scrambling to find out who it might be in the hands of. The conventional view is Islamic jihadists, but the under-appreciated domestic terrorism specialist Angela Zamparo (Toni Collette) believes it might be the work of a far-right group based in Virginia with ties to a rabble-rousing Internet show host named Dallas Wolf (Tracy Letts). Eager to prove himself, Radcliffe’s desk-bound jockey Nate Foster agrees to go undercover for her, working his way up from low-level thugs to publicity-hogging Aryan leaders to upper-middle class family types who might be the most quietly dangerously of all.

Indeed, the last (as played by True Blood’s Sam Trammell) especially is not to be under-estimated – between potluck for the neighbours on Sundays and listening to the classical recordings to Leonard Bernstein, the likeable Gerry Conway helps a White couple stage their wedding in front of a pair of blazing swastikas. Oh yes, the skinheads might agitate on the streets or during the marches from time to time, but it is the clean-living teetotal racists who not only exert their influence among their neighbours and community insidiously but also have the intellectual and organisational means to plan for ‘change’. As Nate works his way through a crisscross of potentially lethal racists and neo-Nazis, Ragussis works up a fair amount of suspense keeping us guessing just who might be attempting to build a dirty bomb. Is it the hate-spewing shock jock Wolf? Or the Aryan Alliance leader Andrew Blackwell (Chris Sullivan)? Or even Conway?

But ‘Imperium’ is less successful as a character study of how a bespectacled classical-music fan to tough-talking hatemonger would be affected by his indoctrination into White supremacy; in fact, it is quite clear that Ragussis is more interested in the world that he has cast Nate into than Nate himself, and whether stopping an assault on an inter-racial couple or rescuing Andrew from armed anti-Aryan members, Nate’s inner convictions remain surprisingly consistent from start to finish. That Nate remains a compelling character is therefore to Radcliffe’s credit, who neither overplays the charged interactions with his fellow skinheads nor underplays the transformation he needs to convince the gang he is infiltrating of his authenticity. This is Radcliffe’s show through and through, but a truly impressive one held together on his slim shoulders – and if you have any doubt that Radcliffe is more than just ‘Harry Potter’, well this is more than enough proof that he is his own actor.

(Daniel Radcliffe is searing and intense as a FBI agent gone undercover with neo-Nazis, and this gripping crime thriller is often held together on his impressive performance) 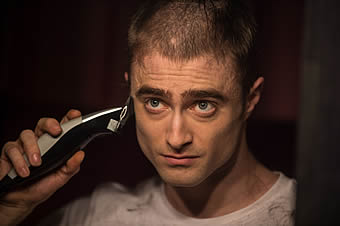 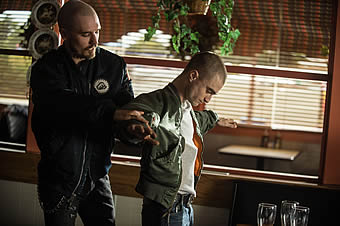 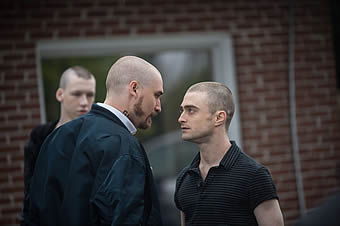 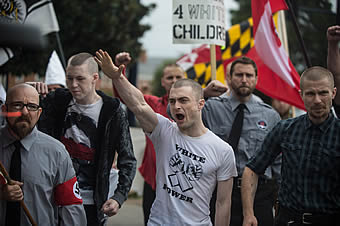 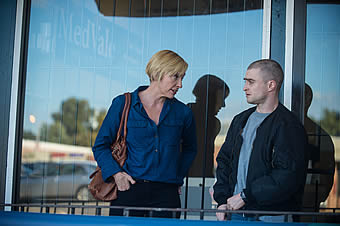