Synopsis:  Based on true events, Warner Bros. Pictures’ and GK Films’ dramatic thriller “Argo” chronicles the life-or-death covert operation to rescue six Americans, which unfolded behind the scenes of the Iran hostage crisis—the truth of which was unknown by the public for decades. Academy Award® winner Ben Affleck (“The Town,” “Good Will Hunting”) directs and stars in the film, which is being produced by Academy Award® winner George Clooney (“Syriana”), Oscar® nominee Grant Heslov (“Good Night, and Good Luck.”) and Affleck. On November 4, 1979, as the Iranian revolution reaches its boiling point, militants storm the U.S. embassy in Tehran, taking 52 Americans hostage. But, in the midst of the chaos, six Americans manage to slip away and find refuge in the home of the Canadian ambassador. Knowing it is only a matter of time before the six are found out and likely killed, a CIA “exfiltration” specialist named Tony Mendez (Affleck) comes up with a risky plan to get them safely out of the country. A plan so incredible, it could only happen in the movies.

I can think of no movie in recent memory that has delivered as much tension as Argo, though how much of this tension you actually feel is going to be dependent on whether you believe the portrayed events. Then again, what’s being asked of the audience is harder than it looks. Argo is something of a strange feature, stamped by real events so preposterous that you’d think they only happen in movies and decorated by dramatised events so believable that you’d find them cutting through your emotions. Yet this is only the result of a confidence that has been growing steadily inside Ben Affleck, the talented actor-turned-auteur who coaxes believability out of absurdity and parlays mundane heroics into heart-stopping intensity.

Affleck, sporting stubborn strands of grey in his gloriously overgrown hair, is a pair of adamantium claws away from becoming Wolverine, but he stars as CIA veteran Tony Mendez here. Charged with getting six American officials out of Iran safely in the midst of the country’s 1979 hostage crisis, Mendez devises a plan so unorthodox and risky that no one can be sure of his survival. He will travel to Iran, give the six false identities, pretend to be part of a Canadian film crew scouting exotic locations for a Star Wars rip-off and sneak them onto a passenger plane in broad daylight. With the six likely to be discovered missing and hunted to death in a matter of time, Mendez must hurry.

The first half of the movie, then, concerns Mendez’s campaign to get his plan approved and his search for the who’s who of Hollywood to helphim sell a credible lie to the Iranian authorities. There’s a great deal of restrain to be had here as Argo dices and splices together an unsettling mix of stock footage and staged scenes to mark the solemnity of the situation, but wisely refrains from dropping the audience into the deep and largely unentertaining end of political grandstanding and social commentary. Instead, Argo turns on the witty dialogue and lively characters, and suddenly we have a movie that’s teetering on self-parody.

To be sure, comedy feels misplaced in a movie that purports to be a re-enactment of a tense rescue attempt. But in offering something watchable, Argo needs to straddle the fine line between exposing the crude humour in seeing what I can only assume were a bunch of uninteresting, poker-faced officials planning the impossible and portraying a less distasteful, but no less serious version of the story. Most of the movies based on true events have struggled with this, recreating scenes that are either too dreary or campy and tearing you out of the experience. It’s a trend that has made Affleck’s nominally bizarre decision to include comedy a remarkable one, careening over the unattractive side of reality while retaining some bit of believability.

The second half, as you may have guessed by now, involves the actual mission of getting the trapped American officials out of Iran. This portion of the movie is a stacked deck of close encounters and mounting tensions, and the fact that the lives of these people were actually in constant question at one point in history means you’ll want to root for at least one of the characters. Dramatisation is worked shrewdly into some of the scenes here, culminating in the most incredible and nail-biting final scene I have ever seen in all movies. Without giving anything away, suffice to say that the final sequence alone is worth the price of admission.

Now, explaining why I think Argo is really good is easy, but explaining why I think Argo needs a perfect score is harder, so bear with me. To be perfectly clear, the tonal shift between the outstanding humour of the first half and the boiling intensity of the second half is rather awkward. But to get two very solid separate halves rescues the movie from irony. The comedy is well-scripted and the tension is immense, and until a complete movie can match Argo in either half, Affleck’s third film as director deserves full credit. 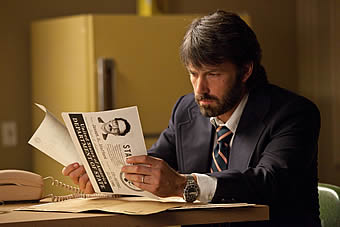 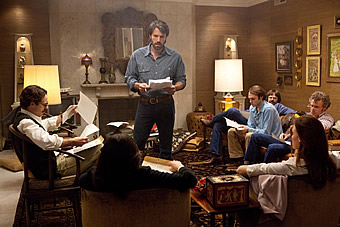 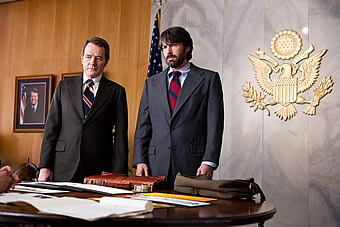