Synopsis: Seven rogue soldiers launch a preemptive strike against a newly discovered alien civilization in the hopes of ending an interstellar war before it starts. After a mining crew on a far off planet makes a disastrous first contact with an alien civilization, General Eron Ryle (Frank Grillo) and the leaders of Earth’s Alliance of Government's debate if there can be peace between “us and them”. Notorious war-hero Gen. James Ford (Bruce Willis) is called upon to lead a squad of elite soldiers to an alien-infested Alliance Colony, Ellora, and find the coordinates of the invader’s homeworld in the hopes of launching a preemptive strike to end a war before it can begin. Along with ethnologist Dr. Lea Goss (Perrey Reeves), bull-headed Specialist Braxton Ryle (Brandon Thomas Lee), demolition expert Dash Wick (Corey Large), and quantum engineer Lt. Fiona Ardene (Adelaide Kane), Ford’s mission goes awry and the squad is forced to reckon with the idea that they could be colonized by the invading army. Goss–the original architect of Operation: Cosmic Sin, a –is captured and her body is hijacked, and she becomes a vessel for the aliens to communicate with the Alliance. But Lt. Ardene realizes the aliens have built a biological-portal connecting their homeworld. As the two civilizations face one another, Ford and Goss reckon with their past and realize they neither civilization was ever interested in peace. In a moment of clarity, Goss breaks free from her possession and guides a devastating Q-Bomb through the portal, sacrificing herself and destroying the alien’s homeworld.

Just how many alien invasion sci-fi movies do we need in a lifetime?

Definitely not one starring Bruce Willis for sure.

Judging from the artwork, Cosmic Sin looks like a cross between Edge of Tomorrow and Battle: Los Angeles. Maybe even Die Hard in Space. The truth is the entire budget is probably a fraction of the entire catering cost of the above mentioned blockbusters. One word: Terrible.

Before the movie actually begins, we are treated to a prologue consisting of notes telling us that the first colony of Mars is founded in 2023. By 2519, the Alliance controls three colonies: Earth, Zafdie and Ellora but Zafdie attempts to secede from the alliance resulting in General James Ford (Willis) ordering a Quantum bomb to be dropped on the rebelling planet. Years later, an alien species infected and controlled two mining workers on a planet which results in a race against time to stop the alien invasion.

Cosmic Sin is an embarrassing low-budget sci-fi that attempts to say a lot by doing very little. For a slim runtime of 88 minutes, the audience are frequently treated to an endless amount of boring dialogue and exposition. There are obvious hints of world building but the screenplay is notoriously bland and emotionless to strike up any interest. As if to beef up the material, there are extensive mentions of complex political and social issues. Seriously, are we in the right movie?

We nearly forgot to mention the prolific Frank Grillo (Captain America: Civil War, The Purge: Anarchy) is also in the flick. He was on the poster if you recall. Well, the tough guy plays General Eron Ryle. Again, for a marquee star, he is not given much to do before he is purged out of the flick. At least you have Bruce Willis right? Nah. Willis continues to sell his half asleep, gruff persona in VOD titles. In between huffing and puffing a few lines and firing a few shots, the once Hollywood A-lister looks more boring than the paying audience. He is on auto-pilot mode and he doesn’t really care about his career let alone world crisis.

Although we are 500 years into the future, everyone rides a normal bike and drives a pickup truck. The highway looks like any highway in 2021. The weapons look typical army issued. The buildings look like abandoned dressed up warehouses. Even the so-called aliens are likely covered up stuntmen with creepy claws. Maybe they spent too much money on the robot bartender and engaging Bruce Willis.

Screenwriter Corey Large snagged a supporting role as Dash but he is better of crafting a more compelling script with director Edward Drake. The various characters feel hollow especially the love angle between Ford and scientist Dr. Lea Goss (Perrey Reeves). If there’s one thing the filmmakers got it right, it’s the aesthetic of space and flying spaceships. The clunky space armour by the way don’t really count.

Cosmic Sin simply looks bad on the big screen. There are plenty of well-made movies on streaming media to while away your time. 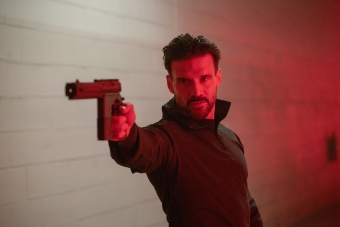 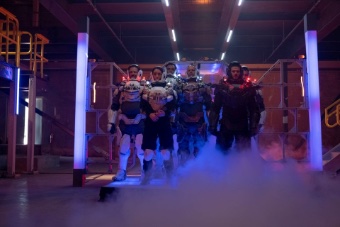