Synopsis: A soldier fighting in a war with aliens finds himself caught in a time loop of his last day in the battle, though he becomes better skilled along the way.

Never has a film more closely resembled a computer game than the latest Tom Cruise sci-fi action thriller ‘Edge of Tomorrow’, which in its cycle of ‘live, die and repeat’ mimics both its form and structure. Don’t be mistaken though – the resemblance in itself isn’t a bad thing; indeed, by steeping itself in the culture and logic of a video game, it offers the same kind of edge-of-your-seat excitement that the best video games do for their players. And yet, this high-concept movie isn’t just a video game substitute - on the contrary, it uses that template to become quite something on its own, a brilliantly-executed piece of summer entertainment that is surprisingly witty, clever, thrilling and oh, one of Tom Cruise’s best movies in recent years.

Adapted by Cruise’s regular screenwriting muse Christopher McQuarrie and brothers Jez and John-Henry Butterworth from the 2004 Hiroshi Sakurazaka novel ‘All You Need Is Kill’, Cruise plays Major Bill Cage, the U.S. Army’s PR man who leverages on his role in the propaganda corps to avoid being sent to the front line. The war in question is laid out in a rapid-fire montage of news reports, which tell of an invasion by a nearly indestructible alien race known as Mimics that has levelled pretty much most of Europe and now threatens to decimate London - unless the international coalition known as the United Defense Force can successfully establish a beachhead against the extra-terrestrials on a French beach that immediately evokes comparisons of Normandy.

Cage is baffled when the leader of the Force, General Brigham (Brendan Gleeson) insists on sending him right into the heart of battle, going to the extent of arresting him as a deserter and inserting him into the ragtag J Squad under the command of a rah-rah bellowing Master Sergeant Farell (Bill Paxton). The very next day, Cage is strapped into the military’s new exo-skeleton armour and dropped onto the beach where the fiery battle is taking place. Turns out it is more of a massacre - not only are the humans outnumbered, they also find themselves ill-equipped to deal with a far superior enemy, and even their one hope, the Force’s star soldier Rita (Emily Blunt), is killed in the onslaught.

Due to sheer dumb luck, Cage manages to kill one of them bigger alien lifeforms, distinguished from the rest of the Sentinel-looking (think The Matrix) ones by a hideous metallic face and its bluish pulse. Unfortunately, he isn’t quite able to escape getting killed after, though his death only resets the clock to when he wakes up at Heathrow and meets Farell for the first time. As the trailer suggests, Rita becomes a crucial piece of the puzzle, and Cage’s ability to reset the sequence of events ultimately turning him into a key weapon against the Mimics’ critical advantage of manipulating time. It all sounds a little confusing we know, so kudos to director Doug Liman and his scribes for keeping the narrative tight and engaging.

Most crucially, Liman ensures that the repetitiveness of his character’s predicament never becomes a quality of his film. Each replay of Cage’s journey from Heathrow to the battlefield never feels tired or even familiar, differentiated either by a small touch of tongue-in-cheek levity or by small but significant variations that get Cage closer to his ultimate mission of finding the nerve centre of the alien intelligence. James Herbert and Laura Jennings’ editing deserves special mention here, for their stitching together of the various scenes is not only intuitive but propulsive, lending the storytelling a momentum that never lets up from start to finish.

Another reason why the time-loop concept doesn’t ever get weary despite the repetition is the wit with which Liman and his scribes build into the material. It may not occur to you the first time, but repeated, such lines as “Battle is a true redeemer; tomorrow morning you will be baptised. Born again.” and “I think there’s something wrong with your suit... Yeah, there’s a dead man in it!” acquire newfound meaning. Once Rita starts training Cage, one recurring - but somehow effective all the same each time - joke is her willingness to press the restart button every time he doesn’t seem to be up to her mark. And then of course, there is Cruise, who injects dry humour into the ‘rinse-repeat’ premise with his refreshingly guileless delivery that upends his alpha-hero image.

Yes, Cruise is at his most charismatic in a role which doesn’t require him to put on any Hollywood vanity. Playing the anti-hero after a string of characters in ‘Mission: Impossible’, ‘Jack Reacher’ and ‘Oblivion’ fashioned out of the same heroic mould, Cruise seems to be having as much fun playing the coward who never wanted to be a saviour in the first place but stumbles into the part out of plain coincidence. Next to Cruise’s nicely underplayed performance, Blunt comes off less engaged than we would expect of the actress’ cast-against-type as a Sigourney Weaver-like character, going about the film in a steely poise that portrays athleticism and determination but little else.

She does however look perfectly suited for the high-octane action, which Liman directs with boldness and imagination not seen since ‘The Bourne Identity’. Cage’s beach landing unfolds in eye-popping combat spectacle, the gunfire, mud and panic of war depicted with realism, urgency and immediacy, i.e. like ‘Saving Private Ryan’ but with aliens. Even with the same battle repeated over and over again, Liman finds new action within it every time, adding new outcomes and reinventing old ones that keeps things fresh and gripping. Through inventive backdrops that evoke the Battle of Britain or the occupation of Paris, Liman keeps the adrenaline pumping, culminating in a grim showdown right in the heart of the French capital.

Sure, you may recognise elements of ‘Edge of Tomorrow’ from other movies like ‘Groundhog Day’, ‘Starship Troopers’ and ‘Source Code’, but the point is still how Liman uses the narrative device from the former in a smart and satisfying piece of science fiction that works as an immensely entertaining summer star vehicle. It might not seem much against the pantheon of Marvel superheroes this summer, but this is truly one of this season’s best, a blockbuster with brains which you won’t mind being caught in a time loop seeing it again and again.

(Smart, intense, thrilling and gripping, this ‘Groundhog Day’ meets ‘Starship Troopers’ sci-fi actioner is immensely entertaining stuff that you won’t want to be left out of its loop) 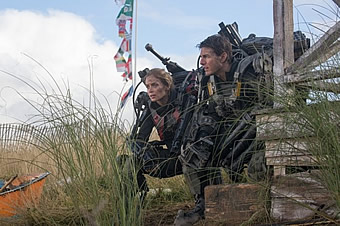 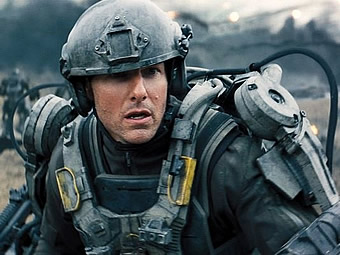 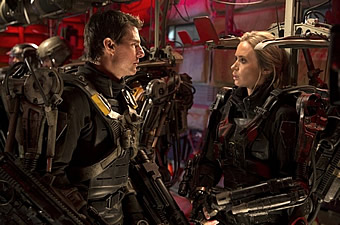