Synopsis: The sequel will once again center on the futuristic annual purge, a 12-hour period during which all crime is legalized. It takes place in the city where there are no security systems and it's just like a war zone where people are just trying to survive.

Nudity is one way to sell a movie and violence is the next. Wrapped around a controversial premise, The Purge: Anarchy relied heavily on the latter in this sequel to the sleeper hit, The Purge.

In Anarchy which is once again helmed and written by James DeMonaco, the annual purge is into its eighth year. Backed by the NFFA, the night where all crime is legal for 12 hours and supposedly a healthy outlet for American outrage, the rich is getting ready to purge out the poor just for entertainment sake while the poor simply are left to fend for themselves.

At this point, if you are still muddled by all the fuss surrounding the purge, I suggest you sit back and soak in all the tension that is happening onscreen. Anyway it doesn’t make much sense that just because it’s legal to kill once a year, unemployment rates will go down and a perfect union will be formed. In other words, taking us back to stone age for a night will fix all the economic, social and enforcement problems. Wow.

Through the eyes of five people, we are taken on one hell of a ride through the deserted streets of LA. Sergeant Leo (Frank Grillo from Captain America: The Winter Soldier) is hell bent to take revenge on a drunkard man who knocked down his son a year ago. On his way there, he happens to save a pair of mother and daughter, Eva (Carmen Ejogo) and Cali (Zoe Soul) from a group of heavily-armed military-dressed men and a couple, Shane (Zach Gilford) and Liz (Kiele Sanchez) from a masked gang they encountered earlier. With his car broke down, Leo has no choice but to escort the rest to a safe spot while at the same time avoiding the impending attacks from both the mysterious armed men and masked gang.

DeMonaco truly has an exploitative statement to make and to his credit, The Purge: Anarchy is a slight improvement over his predecessor where the actions are much better handled. While the first took place almost entirely inside a suburban mansion, the sequel takes viewers to the streets where snipers are stationed on the roofs, booby traps are laid on the road and gang members armed with everything from flamethrowers to automatic rifles are everywhere to lay their hands on the innocent. Its scary, edgy and for the most part effective in sending chills down your spine. You know you are probably going to get shot just for throwing the trash.

The most unsettling part of the entire movie is the poor and homeless which are picked up from the streets are sold to the rich for their killing enjoyment. Talk about getting rid of social class, there’s even a secret government funded army that is going around killing the poor in masses. But in the end, Anarchy is not that movie that is going to delve deep into social commentary or changes how the world is going to function. It’s one that is filled with lots of bloody maniac shooting, explosions and plenty of Grillo’s heroic antics to keep you glue to the screen.

(A B-movie that shoots first before it makes you think) 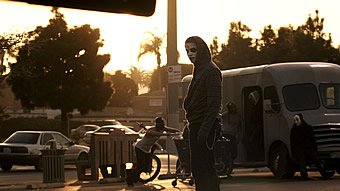 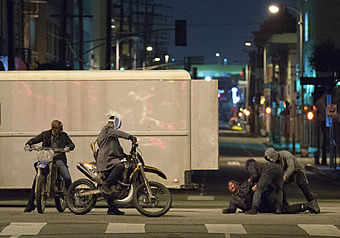 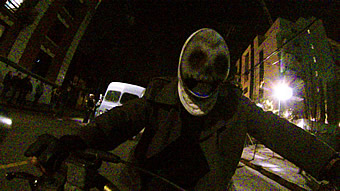