Synopsis: Unaware of the terrifying history of Heelshire Mansion, a young family moves into a guest house on the estate where their young son soon makes an unsettling new friend, an eerily life-like doll he calls Brahms.

If you’ve seen ‘The Boy’, you’ll know why the young boy Jude (Christopher Covery) should never have picked up the life-like porcelain doll he had found buried in the ground in the woods. The said doll’s name is Brahms, which in the earlier 2016 film had terrorised his young nanny hired to be his mate. That movie had also deliberately left the door open for his return despite him being shattered, and this sequel makes it clear that old habits die hard.

Though intended as a standalone movie, there are obvious links between this film and its predecessor. Those who remember the latter will be familiar with the set of rules which Brahms insists are to be adhered to strictly – e.g. no guests, never to leave him alone etc. Disobedience would inevitably earn his wrath, and that is what his new family – comprising Jude, his mom Liza (Katie Holmes) and his dad Sean (Owain Yeoman) – is about to find out.

As is typical of such narratives, the family had recently encountered a traumatic episode it is trying to recover from, and Brahms’ appearance would only make things worse. While he may seem at first a fitting companion for Jude who has chosen to communicate only in writing, Brahms will turn out to be a much more sinister presence, Not only does he exert possessive control over Jude, Brahms would show no remorse hurting those who stand in his way, whether is it by venting his anger at them or making sure that they need to be sent away in an ambulance.

Compared to the first movie, the plotting is a lot more straightforward this time round, even with the introduction of a mysterious stranger named Joseph (Ralph Ineson) who guards the grounds of the larger estate whose guest house Sean, Liza and Jude have moved into. Oh yes, it isn’t difficult to guess that Joseph is somehow connected to the previous Heelshire family that Brahms had previously terrorised, so those looking for the same sort of twist ending as the first movie would undoubtedly be disappointed.

In fact, though ‘Brahms: The Boy II” returns both director William Brent Bell and writer Stacey Menear, the modest success of their earlier film seems less to have emboldened them than lulled them into complacency, resulting in a story that simply lacks any element of surprise. Neither is there much suspense, except for some jump scares here and there, given how Bell seems oddly reluctant to fully unleash the extent of Brahms’ fury on our protagonists.

So even though it runs at an economical 87 minutes, ‘Brahms: The Boy II” is ultimately a dull affair that fails to jolt you or truly engage you with its story of a family in psychological and physical peril. Holmes tries earnestly to win your sympathy towards Liza’s predicament as a mother and victim of the situation, but is sadly undermined by a thin script which hardly gives her character any proper development. Ditto for Yeoman and Covery, both of whom get short shrift with underwritten characters.

On a final note, those who have seen the last movie should know that, while the supernatural element about Brahms turned out to be a red herring earlier, it is indeed at the very core of the strange happenings here. And yet, it is also why this sequel turns out a lot less satisfying, because it is at the end of the day yet another standard-issue horror about an evil soul who resides in the body of a doll (Chucky, anyone?). Even if you might be starved for a horror outing, you’d be well-advised to avoid this generic, and even middling, follow-up to what was a significantly more intriguing entry to the horror genre..

(A sequel even less intriguing than its predecessor, this standard-issue horror about a possessive and possessed doll will leave you indifferent) 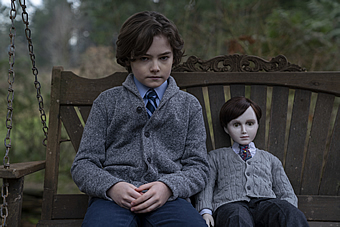