Synopsis: The sequel to the 2012 sleeper hit horror movie. In the aftermath of the shocking events in “Sinister,” a protective mother (Shannyn Sossamon of “Wayward Pines”) and her 9-year-old twin sons (real-life twins Robert and Dartanian Sloan) find themselves in a rural house marked for death as the evil spirit of Buhguul continues to spread with frightening intensity.

Many a horror sequel fail to live up to the legacy of its predecessor because it is content to simply do the same thing over again and/or try to compensate for that familiarity by over-doing on cheap jump scares. Thankfully, ‘Sinister 2’ isn’t that kind of sequel. As much as it places yet another family in a creepy old house with a past, there are more than enough new elements that differentiate it from the original, while at the same time remaining thematically faithful to the earlier Scott Derrickson film that was regarded as one of the better horror films of its year.

Derrickson doesn’t return to direct this sequel, but he and C. Robert Cargill again assume writing duties here. Given the fate of Ethan Hawke’s character at the end of ‘Sinister’, the duo has wisely chosen to leave his character to rest; instead, it is James Ransone’s Deputy So & So who makes a comeback, the former deputy who had previously assisted Hawke’s Ellison Oswalt now himself obsessed over such similar cases. Indeed, the erstwhile police officer has been tracking houses which were scenes of grisly murders accompanied by the disappearance of the families’ youngest, and his own investigation has since brought him to a rural farmhouse where a mother is taking refuge with her two sons from her abusive husband.

Unbeknownst to her, the older twin Dylan (Robert Daniel Sloan) has been seeing several ghosts of young children around the house, who conspire every night to get Dylan to sneak to the basement and watch snuff movies recorded on Super 8 film of them killing their entire families. If Dylan doesn’t cooperate, they promise that his nightmares won’t go away – or that the demon by the name of Bughuul would be very, very upset. Their intentions only become clearer much later on, and without spoiling the surprise, let’s just say that it has to do with some sibling rivalry between Dylan and his much more impetuous younger brother Zach (Dartanian Sloan).

Although casting the accursed family as a protective mother and her twin sons might seem a convenient way of appealing to audience sympathy, there is a much more ingenious reason for the conceit. Those who have seen the first movie will recall the twist near the end where each unfortunate family meets their end only after moving from a previous scene of murder to a new residence; as it turns out, Courtney (Shannyn Sossamon) is particularly inclined to moving away whether by force or volition once she is found by her husband Clint (Lea Coco) . That adds a frisson of urgency to the deputy’s quest to find out more about Bughuul before her inevitable move, a personal mission which also puts him directly in evil’s way.

Whereas the earlier movie was told largely from Ellison’s perspective, Derrickson and his substitute Ciaran Foy opt not just to observe the proceedings from Courtney’s point of view but also that of Dylan’s, especially as the latter is repeatedly seduced by the seemingly innocuous exhortations of Bughuul’s ghost kids. At the same time, reinstating the former’s offbeat supporting character into this narrative also provides a perfect opportunity to explore the mythology of Bughuul, in particular a vital clue left behind by Professor Jonas (Vincent D’Onofrio) whom Ellison had previously consulted that points to the demon’s modus operandi from more than four decades ago.

At no point do the writers nor Foy sacrifice proper storytelling for convenient scares, and aside from the unsettling moments that are meant to make you squirm (or jump) in your seat, there is a surprisingly well-developed narrative that keeps you on edge. The former however should not be under-estimated, as Foy shows more gumption than Derrickson by upping the shlock factor of the found footage – one shows an entire family being electrocuted by their son while seated in a pool of water in their kitchen, another shows a separate family buried in the snow to die of hypothermia, but the most shocking of all is that which takes place on the grounds which Courtney had moved into, which sees the family of a church minister and the minister himself being burrowed alive by rats trapped on top of their stomachs under a bowl on which rests a piece of hot coal.

Even without its predecessor’s benefit of surprise, ‘Sinister 2’ packs plenty of suspense as it unravels the origins of Bughuul while demonstrating in detail just how each one of the missing children is exploited to recruit his very next victim. Like we said at the beginning, this sequel proves superior than most others of its ilk by being much more than just a retread of the original while showing an impressive restraint against jump scares. It doesn’t hurt that it also boasts a gripping story which builds to a strong finish that reinforces the malevolence of the children who have fallen prey to Bughuul’s devilish charms. Yes, it is a more than worthy sequel all right, and one that most certainly lives up to its title.

(The rare sequel that lives up to the legacy of its predecessor, ‘Sinister 2’ offers gripping suspense while amping up the shlock for a genuinely unnerving experience) 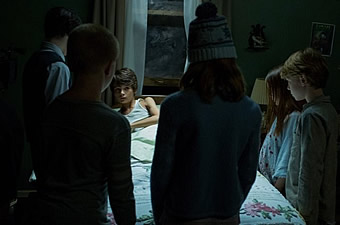 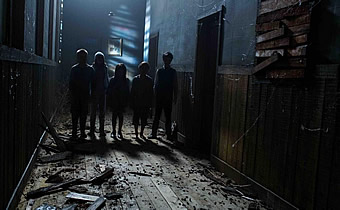 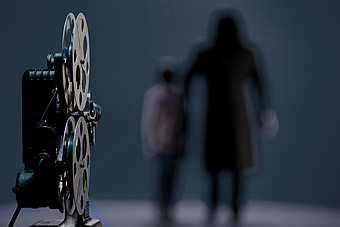