If you’re a fan of the Don Mancini series which continues to live on in direct-to-video sequels, chances are that you won’t much like this reboot that Mancini himself has denounced. Whereas the former revelled in campy fun and scares, this new ‘Child’s Play’ by Norwegian director Lars Klevberg and screenwriter Tyler Burton Smith feels utterly mechanical in its treatment of what is essentially a killer doll. Oh yes, other than being gory, there is hardly any fun to be had with this update, which perhaps deliberately chooses not to follow its cousins down the path of self-aware humour and ends up all the more poorer for it.

Frankly, we were disappointed the moment we saw this Internet-of-Things era version of Chucky. Instead of the battery-operated doll which was possessed via voodoo by the soul of a deranged psycho, Chucky is here an animatronic ‘Buddi’ that is supposed to be both its owner’s best buddy (get it?) and an Amazon Alexa-like gadget able to assist in your day-to-day tasks by controlling your home’s smart devices. There is no psycho here too, but rather the workings of a disgruntled employee at a sweatshop in Vietnam, who after being reprimanded and fired by his supervisor, decides to programme a chip without the usual violence-inhibiting functions for one of the ‘Buddi’ dolls, hence resulting in its proclivity for aggression.

Indeed, the conceit here is that Chucky learns his murderous tendencies, than inherits them, by watching such slasher movies as ‘The Texas Chainsaw Massacre 2’. As wry as that may be, it is far less compelling than the original – not only does it lack the personality of say the misogynistic killer whose murderous soul now inhabits the innocent-looking doll, this updated premise finds itself bereft of a reason why the doll would even call itself Chucky, simply dismissing it as something utterly random. It doesn’t help that the design of the ‘smart’ next-gen doll here hardly looks as adorable as the old Chucky, a key quality in emphasising the dichotomy between how he looks and how he behaves.

As with the original, Chucky finds his way into the hands of a widowed single mum, who then gifts it to her young son. Mom here is reconceived as Karen (Audrey Plaza), who works at a department store selling them Buddi dolls and is dating a cheating husband Shane (David Lewis). On the other hand, Andy (Gabriel Bateman) is an introverted kid with a hearing disability, who doesn’t get along at all with Sean and has a pet cat with a testy temperament that will (literally) be the death of it. Andy too befriends two kids on the block – Falyn (Beatrice Kitsos) and Pugg (Ty Consiglio) – who will come to his aid when the time calls for it, as well as a friendly African-American cop named Mike (Brian Tyree Henry) living next door with his mom.

Not surprisingly, each of these characters will take turns to have their fateful encounter with Chucky, whose raison d'être for murder evolves from its overprotectiveness of Andy to an overwhelming possessiveness over him. That relationship between Andy and Chucky has always been a pivotal dynamic in the film, given how it will come down to whether Andy manages to overcome his feelings of affection for his toy in order to save his loved ones, but that is somewhat muted here. Even as Andy’s reclusive nature sets him up nicely to develop a bond with his Buddi, we are never really convinced how much Andy really cherishes his animatronic companion, and therefore his eventual sense of resolve to stop Chucky once and for all.

If there is one thing which Klevberg’s version trumps over Mancini’s original, it is the gruesomeness of the murders, which includes death by tiller, death by mechanical buzzsaw and death by vicious stabbing. Oh yes, the violence is R-rated all right, and these scenes are staged such as to appeal to the sadistic crowd likely to cheer on the more inventively macabre they get. Granted that the ‘Child’s Play’ franchise had always played to these pleasures, but at least with the original and its sequels, the killings had the cover of being the work of a deranged individual who was anything but normal, an excuse which this reboot lacks.

Unless therefore you live vicariously through onscreen gore, there is little reason to check out this update of ‘Child’s Play’. Even for millennials who had not grown up with the original Chucky, the Mancini series is probably a better introduction to the infamous character than the reboot. Ultimately, it would have been better if the film had embraced its twisted origins, and gone for the same playful self-awareness which is the franchise’s very cult appeal. By draining that, and turning it into a slick slasher movie, it is just no longer as fun or as cruelly entertaining as it should be. Not everything updated to digital is better than its analog predecessor, and this modernised version of ‘Child’s Play’ is proof of that.

(Lacking the playful self-awareness of the original and its sequels, this reboot trades personality for slick displays of violence and gore, and is all the poorer for it) 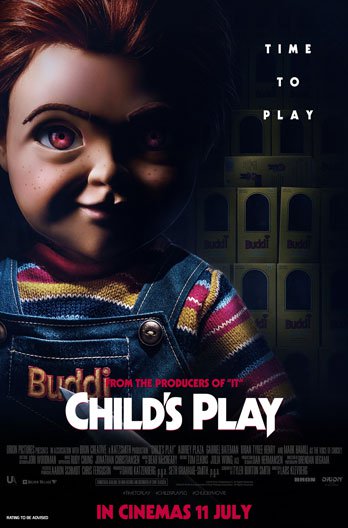