Synopsis: The famed horror team of director James Wan and writer Leigh Whannell reunite with the original cast of Patrick Wilson, Rose Byrne, Lin Shaye, Barbara Hershey and Ty Simpkins in "Insidious Chapter 2," a terrifying sequel to the acclaimed horror film, which follows the haunted Lambert family as they seek to uncover the mysterious childhood secret that has left them dangerously connected to the spirit world.

Unfortunately for fans of James Wan’s earlier creepfest, ‘Insidious: Chapter Two’ isn’t as great as its predecessor. Whereas the former intrigued and terrified viewers with its fascinating concept of a parallel dimension full of restless spirits (known simply as ‘The Further’), this one seems content on recycling the same elements for a gripping but slightly less captivating - nor for that matter, chilling - continuation of the earlier tale.

So titled ‘Chapter Two’ because it picks up directly from where the last left off, returning screenwriter Leigh Whannell (who developed the story together with Wan) has the Lambert family - dad Josh (Patrick Wilson), mom Renai (Rose Bryne) and their three kids - relocate from their home to that of Josh’s mother Lorraine’s (Barbara Hershey). Those who have seen the first movie might recall that Josh had crossed into the realm of ‘The Further’ to bring Dalton’s soul back, but did not return as his son did, the very entity now in possession of his body strangling the medium Elise (Lin Shaye) at the very end.

Now that the demonic spirit has actually taken on human form, what ensues feels a lot more familiar - and therefore less inventive. We wait as Renai slowly realises from the mysterious strains of the piano, the children’s toys coming to life and most unmistakably the wraith of a lady in hideous makeup wearing a long white dress that the horror isn’t yet over. While Renai teeters on the brink of scepticism, Lorraine is much more astute, teaming up with Elise’s erstwhile sidekicks Specks (Whannell) and Tucker (Angus Sampson) as well as Elise’s old friend Carl (Steve Coulter) to reconnect with Elise in the hope of finding out just who or what killed her.

To reveal anything more would probably be spoiling it for those looking for a second helping of ‘Insidious’ - suffice to say that it has something to do with Josh’s own haunting as a child (established in the first movie) by a ghoulish bride. Lorraine’s own investigative work will lead them to well-known horror tropes - abandoned hospital rooms, boarded-up houses and creepy basements - which Wan maximises for an effectively unsettling time. Indeed, Wan’s gift as a master horror conjurer (pardon the pun) is on impressive display here, coming very close to recapturing the dread, anxiety and tension which made its precedessor - as well as this summer’s ‘The Conjuring’ - such classics.

Though effective, this sequel lacks the ingenuity that made its predecessor such an unmitigated delight. The first half of the movie plays like any other possession-themed movie (which the former smartly sidestepped by positioning itself as a precursor), using some gradually thickening pasty makeup to illustrate Dalton’s worsening condition as the link between his soul and his body gets weaker. In fact, one doesn’t even get to step into ‘The Further’ until the last third, and even that journey back into that alternate realm doesn’t delve much further about that dimension (pardon the pun) than what we already know from the first movie.

As if aware of the nagging sense of familiarity his audience must be feeling, Whannell tries doubly hard to spin some late twists into the story by adding a surprising amount of backstory - too much in fact, that the last third feels hurried and slipshod compared to the deliberately paced and more carefully crafted setup. That said, the twists do tie in pretty neatly with the yet-unexplained events of the first film - one just wishes however that Wan and Whannell could have accelerated the pace at the start to leave more time to develop the extended climax.

Even so, this is admittedly a less character-driven story than the last, and despite a similar family-in-distress plot, it’s likely that you will feel less for the Lamberts’ predicament. Though he may get top billing in the opening credits, Patrick Wilson is pretty much relegated to a supporting act this time round as the possessed dad, and earns too little sympathies for his character as a result. Bryne fairs slightly better, but it is Hershey who proves to be the scene-stealer here as the resourceful mother who gets her own ghost-busting subplot. And as the bumbling ghost-busters, Whannell and Sampson are less amusing this time round, especially with Coutler being a poor substitute for Shaye’s anchor presence in the last film.

Given how surprisingly inventive the first movie was, it’s rather inevitable that returning to that same world might feel a little less exciting. Though it may be convenient to dismiss this movie as a case of sophomore sequel lethargy, it is in fact a pretty engaging and frightening experience on its own, especially when one holds it up to the glut of horror movies Hollywood is fond of churning out for easy money. Yet this chapter is a victim of its own success, and even if ‘Insidious: Chapter Two’ was ultimately more of the same, let’s hope the next instalment teased by the epilogue will take the series somewhere much Further. 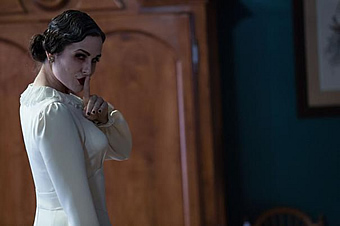 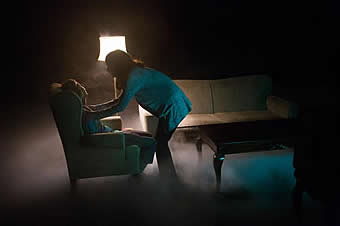