Synopsis: Based on the novel written by Robert Kimmel Smith. The War With Grandpa” stars Robert DeNiro, Uma Thurman, Rob Riggle, Oakes Fegley, and Christopher Walken. Directed by Tom Hill and the screenplay was written by Tom J. Astle and Matt Ember. The film is produced by Marvin Peart, Rosa Peart and executive produced by Tre Peart. The novel has sold over 1.5 million copies. Peter (Oakes Fegley) and his Grandpa Jack (Robert DeNiro) used to be very close, but when Grandpa moves in with the family, Peter is forced to give up his most prized possession, his bedroom. Peter will stop at nothing to get his room back, scheming with friends to devise a series of pranks to drive him out. But, Grandpa doesn't give up easily and before long, it' s an all out war!

The War with Grandpa is based on a classic 1984 children’s book written by American author Robert Kimmel Smith. However, the movie adaptation directed by Tim Hill (Hop, Alvin & the Chipmunks) for sure is not going to be a classic or a memorable family comedy.

After the death of his beloved wife, Ed (Robert De Niro) lives a non-existent life, unable to keep up with things and technology on his own. Fearing for his father’s well-being, his daughter, Sally (Uma Thurman) decides to bring Ed to stay together with her family. The only catch is her son, Peter (Oakes Fegley) has to give up his room to Ed. In an attempt to take back his room, Peter secretly issued Ed a declaration of war.

Peter dragged along his group of best friends to fight against Ed while the latter asked his friends, Jerry (Christopher Walken), Danny (Cheech Marin) and Diane (Jane Seymour) for help. And now, both grandson and grandfather has to come up with a series of pranks to outwit one another.

The War with Grandpa is sort of a throwback to family comedies of the 80’s. Harmless fun and gags and some life lessons to be learnt. But given it’s the year 2020 with more than enough streaming outlets at our disposable, is it still financially viable to catch a movie liked The War with Grandpa on the big screen?

Adding insult to injury, the plotting is filled with some pretty mean acts which can send some wrong messages to the younger kids. Marbles can be dangerous to senior citizens who could slip on them and suffer a concussion. A snake could kill right? The flick spent more than an hour depicting wicked pranks and an extended dodgeball sequence. It’s kind of sad and depressing to watch veteran actors liked De Niro and Walken struggling to keep up with all the onscreen nonsense.

Some of the life lessons imparted by Ed to Peter is genuinely touching enough especially when he mentioned about leaving a photo of him and his wife in houses that he built. And Ed taking Peter to a fishing trip that went wrong is intended to be funny. But there’s too little meaningful messages and moral lessons to be learnt before more mishaps happened and everything expectedly gets resolved liked a Disney movie in the end.

The movie also stars Rob Riggle who has bit roles in 21 Jump Street and Night School as Peter’s dad. Although sadly, he has zero chemistry opposite Uma Thurman. Thurman on the other hand hasn’t had anything remotely interesting on the screen after her success in Kill Bill.

The War with Grandpa is kind of Meet The Parents lite. Robert De Niro used to be funny in comedies but there isn’t that many clever wicked scripts out there for him. The movie is also filled with unnecessary slapstick humour and it is even thinner in material than the original book. Let’s be frank, not every book deserved a screen adaptation, you can start with The War with Grandpa.

MEET THE PARENTS: LITTLE FOCKERS (2010)
Back 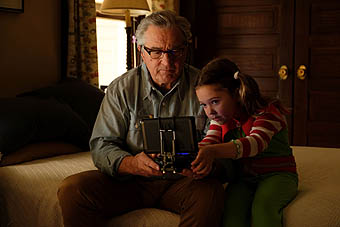