Synopsis: Jason Kelly [Zac Efron] is one week away from marrying his boss’s uber-controlling daughter, putting him on the fast track for a partnership at the law firm. However, when the straight-laced Jason is tricked into driving his foul-mouthed grandfather, Dick [Robert De Niro], to Daytona for spring break, his pending nuptials are suddenly in jeopardy. Between riotous frat parties, bar fights, and an epic night of karaoke, Dick is on a quest to live his life to the fullest and bring Jason along for the ride. Ultimately, on the wildest journey of their lives, “dirty” Grandpa and his uptight grandson discover they can learn from one another and form the bond they never had.

It is all too convenient to diss this comedy movie - the unanimous unfavourable reviews are almost everywhere. Let’s see, there are just too many reasons why it is easy to tell people this is a “terrible movie”. The plot about a soon to be married man bringing his vulgar and somewhat perverted grandpa from Georgiato Floridafor a spring break isn’t Oscar winning material. A shirtless Zac Efron on the movie poster can only mean one thing: the producers want teenage girls (and probably cougars) to flock to the cinema to check out more shots of the ridiculously good looking 28 year old. And the title “Bad Grandpa” can’t possibly promise film school snobs an intellectual after movie discourse either.

Then there is the awkward, and may we say, embarrassing inclusion of Robert De Niro. The veteran actor has won countless acting accolades in his career, including Academy Awards for Best Actor (1980’s Raging Bull) and a Best Supporting Oscar (1974’s The Godfather Part II), and the AFI Life Achievement Award in 2003 and a Golden Globe Cecil B. DeMille Award in 2010. Now, what’s this highly regarded actor doing shirtless on the poster of Dan Mazer’s (I Give It A Year) second directorial work?

We say, give the old man a break. Having starred in over 90 films, the man can do what he wants at his age of 72 years old. Besides, the producers of this M18 rated movie (for coarse language and sexual scenes) probably came up with an attractive remuneration package that made De Niro feel that the effort was worth his time. So there, let’s be less judgemental.

The 102 minute movie does not pretend to be high art. De Niro spouts profanities freely throughout, and Efron has no qualms flaunting his well built bod in numerous scenes. The jokes are crass and what some may consider as tasteless. But hey, were you really expecting clever and sharp humour when you paid for that ticket to watch this movie?

We’ve seen De Niro play mentors to younger characters (Meet The Parents, The Intern), and this seems to be his most outrageous yet. Although one wonders what was in the actor’s mind when his character tries repeatedly to get into the pants of younger girls, you have to applaud him for gamely taking up this role. It will probably not earn any rave reviews, but at the same time, he probably doesn’t need another acting award to prove his worth.

Efron, on the other hand, is often forgiven for his lack of acting chops because of how gorgeous he is (yup, the world we live in is superficial like that). And this will continue like it how showbiz has indulged him previously in That Awkward Moment (2014), Bad Neighbours (2014) and We Are Your Friends (2015). Here, you get to see him dancing naked (with only a hornet stuffed toy covering his private parts) to the infectious Macarena tune, and muscle his way through in a flex off competition.

To be fair, the chemistry between De Niro and Efron is enjoyable, and it is one you secretly wish you had with your own grandpa. If you really had to scrutinise every bit of this occasionally hysterical comedy, we advise you to sit out of this one.

(Were you really expecting an intelligent comedy when you saw Zac Efron and Robert De Niro shirtless on the movie poster?)

MEET THE PARENTS: LITTLE FOCKERS
THE INTERN (2015)
Back 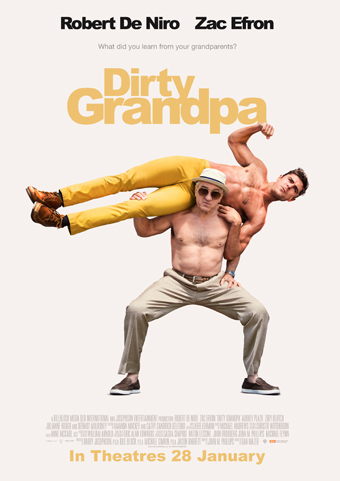 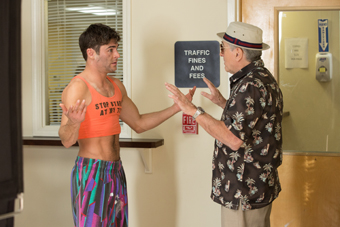