Synopsis: Directed by Jon Turteltaub (National Treasure, While You Were Sleeping) and written by Dan Fogelman (Crazy, Stupid, Love), the comedy stars four Academy Award® winning legends for the first time on the big screen - Michael Douglas, Robert De Niro, Morgan Freeman and Kevin Kline. They star as lifelong friends who opt to stop acting their age and relive their glory days when the pack’s sworn bachelor decides to get married to his girlfriend (who is half his age). The destination? Las Vegas! But the four quickly realize that passing decades changed the game: Sin City has had its own coming-of-age and a rivalry has strained the bonds of their friendship. The Rat Pack may have once played the Sands and Cirque du Soleil may now rule the Strip, but it’s these guys who are taking over Vegas.

You’re never too old to party in Las Vegas. And with that spirit, the likes of Michael Douglas, Robert De Niro, Morgan Freeman and Kevin Kline have decided to show the ‘Wolf Pack’ from ‘The Hangover’ just how four guys at their age can still paint the town red. Indeed, those marquee actors aren’t your most obvious cast in a ‘men-misbehaving’ lark; you’re probably more likely to look out for them on an Oscar-calibre movie, but hey part of the fun is how unexpectedly delightful they can be when they are just allowed to let loose and have their own party.

The impetus for their wild vacation is Douglas’ impending marriage to a 30-year-old woman - and we might add that Douglas absolutely looks the part of the playboy lawyer Billy who, after accumulating wealth for many years (including a beachfront home in Malibu), has finally decided that it is time to end his bachelorhood. To celebrate his nuptials, three childhood friends of his - who dub themselves ‘The Flatbush’ Four - decide that it is time to reunite in Vegas for a bachelor party.

The gang consists of Archie (Freeman), who having recently suffered a stroke now resides under the careful supervision of his patronising son (Michael Ealy); Paddy (De Niro), a surly widower still recovering from the death of his wife and is rooted in depression to his chair wearing just a bathrobe; and Sam (Kline), resident in a Florida retirement community who is struggling to come to terms with his fading life and libido. It isn’t all chummy between the pals though - De Niro gets to do his signature grouchy and intense routine by getting upset with Douglas for not making time to attend his wife’s funeral.

But as Dan Fogelman’s script goes, you know that by the time it’s over, Paddy and Billy will have made up with each other. Not just that, but each of the individual characters would also have come to terms with their unhappy parts of their selves and had a ‘living life to its fullest’ experience - whether is it channelling his rage against a young punk in the case of Paddy or rediscovering true romance as in Billy’s case. Yet predictable though it may be, Fogelman doesn’t gloss over the real issues that surround the shift into old age, and we surmise that it is precisely the dignity he accords his characters that explains why the material has managed to snag such an ensemble cast.

On his part, director Jon Turteltaub is content to simply let his actors be their familiar onscreen personas. We’ve already mentioned De Niro and Douglas; and besides them, Freeman is his usual regal self (even when hitting the dance floor to show off his moves to Earth, Wind and Fire’s ‘September’) while Kline reprises his get-up as a father figure in one of his most well-known movies ‘The Big Chill’. Such movies only work when the characters have chemistry with one another, and in case there was ever any doubt, the acting legends here have plenty. The most memorable performance here however belongs to Mary Steenburgen, who at 60, still looks stunning enough as a tax attorney-turned-lounge singer who sets the hearts of these Rat Pack retirees aflame.

Together, Steenburgen and her male companions make a total of five Oscar winners headlining the cast of ‘Last Vegas’. This isn’t award-winning material by any measure, but hey it’s not like it was ever aspiring to be; instead, this is simply a rare team-up among four esteemed actors willing to kick loose and have fun. Sure the babes, booze and misbehaviour does get a little self-indulgent at times, but seeing how game these actors are, you’ll be a stinge not to let them enjoy a good time, or even go along for the ride. 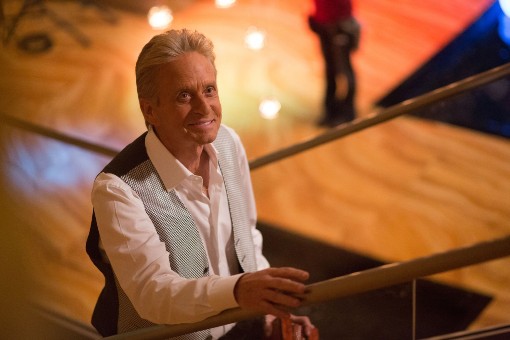