Not exactly a sequel or a reboot of 2016’s ‘Suicide Squad’, ‘The Suicide Squad’ is writer/ director James Gunn’s do-over of that disastrous superhero movie which never managed to be as absurdist as it needed to be.

That Gunn was available to apply his creative genius to the DC comic book property was pure fortuity – as Marvel fans would know, the director was slated to direct the third installment of the ‘Guardians of the Galaxy’ franchise before Disney severed ties with him over a couple of off-colour jokes he had tweeted in the past. That (momentary) loss is DC’s gain, for Gunn’s hard R-rated take on the material is an absolute delight.

Combining his recently gained experience for glossy mega-budget superhero movies with his penchant for over-the-top gore-fests (think ‘Tromeo and Juliet’, ‘Super’ or ‘Slither’), Gunn fashions a deliriously ultra-violent mix of action and satire. Unlike his predecessor, Gunn understands the whole point of having fun with these despicable but oddly likeable characters, including a number of hold-overs from the previous movie and a massive roster of new guys; and returning to help connect the old and the new is the mysterious U.S. government official Amanda Waller (Viola Davis), who is once again recruiting incarcerated villains to do dangerous missions in exchange for time off their sentences.

The movie opens with a misdirect: the silver-haired Savant (Michael Rooker) is enlisted by fitting him with a device that will blow his head off if he disobeys her orders, and promptly sent off on a beach raid under Commander Rick Flag (Joel Kinnaman; also a 2016 holdover) that recalls the ‘Bay of Pigs’ invasion. Minutes later, the team is betrayed by one of their own, with just Rick and Harley Quinn (Margot Robbie) surviving the massacre.

That battle is however but a distraction for the real team to move into place. These comprise the ex-military operative Robert DuBois aka Bloodsport (Idris Elba); the similarly matched sharpshooter Peacemaker (John Cena), who wears his patriotism on his sleeve; the sweet, sensitive young woman Ratcatcher 2 (Daniela Melchior), who can control rats telepathically; the deeply introverted Polka Dot Man (David Dastmalchian) with mommy issues; and last but not least the half-man/ half-shark King Shark (voiced by Sylvester Stallone) prone to munching anything he sees.

Their mission, as Waller explains, is to infiltrate the fictional South American nation of Corto Maltese, where a recent military coup has unseated the authoritarian regime which was nonetheless friendly to the US; in particular, Waller has asked that they destroy a phallic-looking research facility called Jotenheim that houses Project Starfish, and it should be no secret that the reference is to the giant, telepathic, pink starfish called Starro which has been featured prominently in the trailers.

Than simply bombard his audience with deliberately choreographed set-pieces, Gunn puts plenty of time in the first half building the team’s bond. Indeed, the dynamics among the mismatched anti-heroes is at the very heart of the movie: the match-up between Bloodsport and Peacemaker is perfect, beginning with amusing squabbles over who is better at killing and evolving into a compelling distinction between loyalty and humanity; Ratcatcher 2 stands out as the group’s sole warm, empathetic spirit; and King Shark is an unexpectedly loveable oddball.

It is not until the second half that the action really kicks in, and by then, you’ll be lapping up every single one of their respective eccentricities. Harley Quinn’s standalone set-piece is delightfully deranged, as the cheerful anarchist visualises every bullet and blood-splash as bursts of candy-coloured flowers. The raid on Jotenheim is both thrilling and chilling at the same time, and the subsequent showdown between the Suicide Squad and Starro the Conqueror in the streets of the city is most notable for letting the least expected among them save the day.

That the characters are such good company is also to the credit of the distinguished ensemble which Gunn has assembled with careful attention. More so than in her previous two outings, Robbie settles into her role as Harley Quinn here with utter gleeful abandon. Elba brings his reliable charisma to Bloodsport, and perhaps most significantly, shares an infectious chemistry with a perfectly cast Cena whom he exchanges barbs in place of bullets. Though the sheer number of characters means other supporting acts (like Peter Capaldi’s mad scientist or Juan Diego Botto’s villainous but suave new president) do not get as much time to shine, you can tell each is determined to simply have as much riotous fun as Gunn would allow.

In case it isn’t yet obvious, ‘The Suicide Squad’ is as bonkers as anything Gunn has ever done for the mainstream crowd; and yet, that is exactly what was needed to rescue this movie from the ignominy of its predecessor. By being darkly funny, bleakly self-aware and unapologetically nihilistic at the same time, this re-do succeeds in being a rollicking ride from start to finish, buoyed by a brilliant group of actors who knows just how to Gunn it. As sadistic as it may sound, you’ll be having a blast watching them die to save the world.

(A deliriously ultra-violent mix of action and satire, this do-over of the DC comic book is as absurdist as its predecessor never was but should have been) 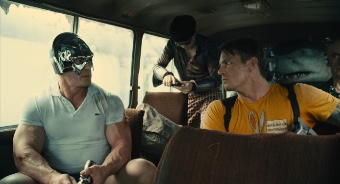 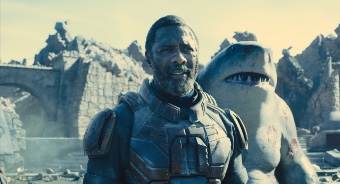