Synopsis: A couple (Anya Taylor-Joy and Nicholas Hoult) travels to a coastal island to eat at an exclusive restaurant where the chef (Ralph Fiennes) has prepared a lavish menu, with some shocking surprises.

At Hawthorne, the fictional restaurant that does a single multi-course service each evening, only a dozen guests are allowed per seating. Yet despite the fact that it costs US$1,250 per head, reservations are notoriously hard to get. That is credit to its chef Julian Slowik, whose reputation as a culinary artist, an innovator and a perfectionist far precedes him.

Likewise, if there is one reason to watch Mark Mylod’s deliciously mean ‘The Menu’, it is Ralph Fiennes. As Chef Slowik, Fiennes sinks his teeth into a fiendish turn that sees him have probably the most fun in a long while. Alternating between warm benevolence and cold psychopathy, Fiennes is utterly fabulous as the ringmaster at Hawthorne, lording not only over his obsequious underlings in the open kitchen but also over the drooling one-percenters gathered to partake in Slowik’s fabled tasting menu.

Among the one-percenters gathered for the night’s occasion are three finance bros (Arturo Castro, Mark St. Cyr, Rob Yang), a preening food critic (Janet McTeer) and her editor (Paul Adelstein), a fading movie star (John Leguizamo) and his assistant (Aimee Carrero), an older married couple (Reed Birney and Judith Light), and last but not least a simpering foodie (Nicholas Hoult) and his last-minute date (Anya Taylor-Joy). Notwithstanding the ensemble, it is Margot who stands out amongst the diners.

Without giving too much away, let’s just say that except for Margot, none of the other guests are there by accident – in fact, as we will discover just three courses into the night’s menu, Chef Slowik knows what each and every one of the guests has been up to, whether is it manipulating tax returns, engaging in the company of female escorts or phoning in a performance in an obviously bad movie. The exception of course is Margot, and a good part of the first hour has Chef Slowik challenging Margot which side of the room she belongs to.

Working off a surprisingly layered script by ‘Onion’ alums Seth Reiss and Will Tracy, Mylod fashions a stylish critique of elitism, capitalistic excess and fetishized food culture. It isn’t hard to tell that most of the guests in the room are guilty in their everyday lives of being entitled, rude and self-satisfied people, not least in how they treat the restaurant captain Elsa (Hong Chau), and it is precisely such despicable behaviour which Chef Slovik has decided to mock, chide and punish over the courses of his thoughtfully designed menu.

Like a degustation, the movie is structured from amuse-bouche to dessert, with each course carefully designed to pace out the revelations and escalate the punishments. The reckoning though isn’t just for the guests; as it turns out, the wild card of the night (i.e. Margot) will also force Chef Slovik to confront how he has been party, privilege and prisoner to the demands of the one-percenters, and it is their series of scenes together that help the movie find its emotional core.

To be frank, we went in not knowing what to expect of ‘The Menu’ and came out impressed and satisfied with this elaborate opera of humiliation, self-loathing and revenge. That it works so beautifully is also credit to Fiennes, who embraces his role as an arbiter of vengeance as well as the film’s chief villain. As counter-programming against both ‘Black’ superheroes dominating the cinema screens, ‘The Menu’ is tart, thoughtful and tasteful.

(Dark comedy laced with social commentary, this deliciously mean thriller gets its bite from a smart script, sharp direction and an utterly fiendish turn by Ralph Fiennes) 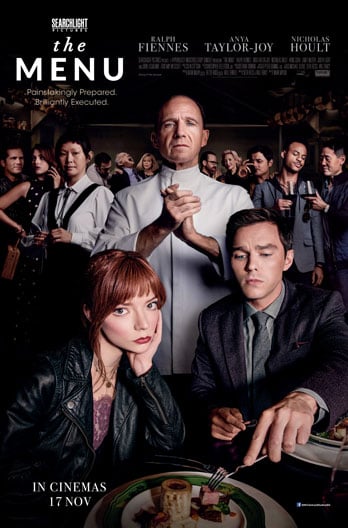