Synopsis: Escape Room is a psychological thriller about six strangers who find themselves in circumstances beyond their control and must use their wits to find the clues or die.

Escape rooms are the latest trend as of late and there is much excitement in playing interactive games like this.  And there is nothing to be afraid of, even if you cannot solve the life puzzle.  I mean, eventually you will get out, right?

Escape Room is a psycho-thriller about 6 random people from different walks of life being invited to play a round in an escape room, without realising that the escape room is more than just a regular escape room.  Each room becomes more challenging and dangerous, with the players having to hold on to their lives to survive.

Gradually, bit by bit, the players realised that each of them have a common denominator and that they will eventually get killed one by one Final Destination style and only one will survive to win the grand prize.

With so much excitement in its trailer itself, it is no wonder that people would be overly excited by this madness of a live action thriller.  Sadly, it does have its flaws.

While the pacing is generally comfortable, certain parts of the films seem to either drag unnecessarily or speed quickly, leaving you with either moments of endless and mindless chattering among the characters or moments of accelerated confusions.

And while the mixed cast did pretty well with their believable and impressive performance, it eventually was not able to make up for the simplistic plot, which in turn made the film slightly shallow.

That is not to say that the film is lacklustre. There is certainly a sense of excitement and slight jump scares despite its plot being quite typical.  One will also be taken on a journey through a series of exhilarating visuals that is pleasing to the eyes and yet not overly done to turn one off.

The witty puzzles and few plot twists made the film rather thrilling and make the audience feel engaged and give them the desire to crack their brains over the games, especially with its Saw-like references and heart-pumping moments (thankfully, we are spared the extreme gore that Saw has instilled in its films).

Eventually, Escape Room is a simple film that is thrilling and exciting enough to get you to go to the cinema to watch it, but its tried-and-tested plot might end up making the film slightly forgettable.  Still, it is worth sacrificing 100 minutes of your life getting entertained by the idea of being in a situation as freaky as the Escape Room.

(Just go without too much expectations and focus on the game itself. Then your journey would be fun... if you dare) 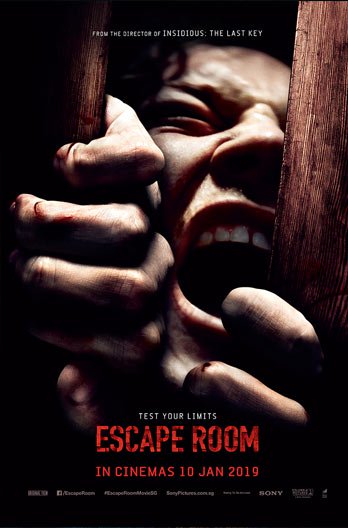