Synopsis: After the death of her mother and having no other known relatives, Evie (Nathalie Emmanuel) takes a DNA test...and discovers a long-lost cousin she never knew she had. Invited by her newfound family to a lavish wedding in the English countryside, she’s at first seduced by the sexy aristocrat host but is soon thrust into a nightmare of survival as she uncovers twisted secrets in her family’s history and the unsettling intentions behind their sinful generosity.

To be frank, we weren’t quite sure what to expect from ‘The Invitation’, notwithstanding its high-concept premise. Those who have seen the trailers would probably be similarly intrigued by just what the titular invite is all about, after being teased a modern-day Gothic vampire thriller in which a young woman from New York is invited to a lavish wedding in the English countryside whereupon she chances on old weirdos in masks, obscenely wealthy creeps, racist butlers, disposable hired help and oh, vampires. We cannot say though that our curiosity was entirely satiated, but it is probably good enough that this late-summer low-budget horror did not leave us hungry.

The said young woman is aspiring ceramicist Evie (Nathalie Emmanuel), who lives from paycheck to paycheck on a catering gig. Evie is still grieving over the recent death of her mother, which explains why she decides to use a DNA testing kit she finds in a swag bag she helps herself to at a swanky party for Find Yourself. Her search turns up a match in a long-lost cousin named Oliver (Hugh Skinner), an overly enthusiastic Brit who immediately invites her on an all expenses paid trip to attend a family wedding at an English manor. Upon arriving at the property, Evie takes a shine to the lord of the residence, Walter (Thomas Doherty).

Their budding romance is one half of the focus of the first hour, the other of which concerns the sinister events lurking within the castle walls. Not only are the new maids numbered, they also seem to disappear from sight once they are assigned to clean the manor’s library, which is kept under lock and key and that Evie is told not to enter.  Evie also suspects that someone is in her room watching her as she sleeps at night, and is startled one evening by a bird smacking dead into her bedroom window. Whilst it is understandable why the obvious answers to these happenings are withheld from us at the start, it is lamentable that it takes close to an hour to get to the reveal, and by that time, struggles to build any real sense of mystery or suspense.

Without giving away too much, ‘The Invitation’ only gets to the wedding dinner party where Evie sees the true horror of her host and fellow guests in full display at the hour mark, before rushing through a conclusion which sees her embrace her newfound powers in order to overpower Lord Walter and the condescending maid of honour Viktoria (Stephanie Corneliussen). As much as she tries, director Jessica M. Thompson fails to compensate for the lethargy of the second act with the pace of her final act. It is also a pity that Brian Butler’s script doesn’t develop the mythology of these vampires further, not least their unusual ability to be able to walk around in broad daylight and do other things that make it easy to escape detection.

Nor for that matter does the film fully lean into issues of race, class and social privilege compellingly enough to become sharp social critique. Early on in the film, Evie has a run-in with the lead butler Mr. Fields (Sean Pertwee) when she stands up for the maids whom had dropped a tray of wine glasses after she accidentally bumps into them. Not long after, Evie calls out both her White relatives and Walt for his ostentatious privilege. But other than a late reminder of ‘wealth, power, a life of privilege, and a sense of belonging’ which she is told her union with Walt will bring, the movie otherwise doesn’t know how to take aim at the social issues it gestures at, leaving its attempt at social commentary half-baked at best.

Yet even though ‘The Invitation’ is hardly as intelligent as ‘Get Out’, it still is entertaining enough as a late-summer genre offering. Like we said, the pace could certainly have been tighter, but the third act, though rushed, leans into B-movie tropes to deliver some satisfying final act fights and last-minute comeuppance. Evie’s transformation from damsel in distress to vampire slayer will have you cheering in your seats; ditto the epilogue that sees Evie and her best friend Grace (Courtney Taylor) team up to seek revenge on the one that got away. So while we cannot say we were left utterly gratified, those who accept this invitation will find a sufficiently diverting horror thriller that they can sink their teeth in.

(The kind of late-summer diversion just passably entertaining enough for you to sink your teeth into, 'The Invitation' won't make you regret that you had RSVP-ed) 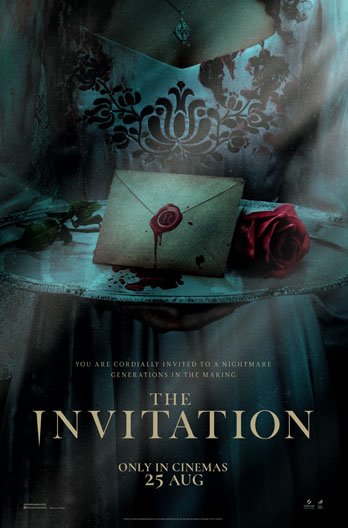