Synopsis: The film revolves around five college-type characters who head to a cabin in the woods and are given clear and clever instructions by "white collar" characters. Once the "victims" arrive at the cabin, it becomes clear that the plan is to lure the kids there to have them break the given instructions so that they might then be "punished."

Just when you thought you’ve seen all that the horror genre can offer, along comes a movie like ‘The Cabin in the Woods’ which is, to say the least, like nothing you have ever seen before. Of course, that’s only what the fan-boys have been anticipating, given the promise from cult producer and co-writer Joss Whedon that this film would turn the genre on its head- Whedon, for the uninitiated, is the much-loved creator of TV’s ‘Buffy the Vampire Slayer’ as well as the man behind this summer’s blockbuster event ‘The Avengers’.

Indeed, this collaboration with fellow ‘Buffy’ writer Drew Goddard (who makes his feature film directing debut here) gives the familiar horror tropes a whole new spin, culminating in one of the most original revelations in the history of the genre that will take your breath away. After all, which horror movie would you find the likes of crazed serial killers, creepy young girls, winged mutants and oversized Anacondas all together in the same place? But before we get ahead of ourselves, let’s just say it starts in more conventional territory to give you some time to warm up to its nuttiness.

So following in the footsteps of classic horror films ‘Friday the 13th’, ‘The Texas Chainsaw Massacre’ and ‘Evil Dead’, the basic premise revolves around five college students, all more or less stock types, taking the weekend to get away to some secluded vacation spot. There’s the jock- a football player named Curt (Chris Hemsworth); the intellectual- a bookish type named Holden (Jesse Williams); the dumb blonde Jules (Anna Hutchison) who is really neither if not for the fact that she had just dyed her hair blonde; the stoner Marty (Fran Kranz) with the retractable bong; and last but not least the virgin Dana (Kristen Connolly), or as one of the surprise characters in the movie comments, at least looks the part.

There is of course much more to it, and right from the outset, the movie keeps you guessing if the quintet are no more than unwitting victims of a scientific experiment, intercutting constantly between the five teens and two techies- Sitterson (Richard Jenkins) and Hadley (Bradley Whitford)- who seem to be running some kind of a rogue surveillance operation. To say anything more would be to give away too much, as part of the fun is really not being able to anticipate what Wheedon and Goddard have up their sleeves. This however we will say to tantalise you- the redneck zombies which terrorise our five protagonists were deliberately released from their apparent resting place in the ground by our two rocket scientist types.

To say the film is brilliant on so many levels is not an overstatement. On the surface, it appears to send up the typical teen horror genre conventions with witty teen-speak (think this generation’s ‘Scream’) and keen self-awareness while keeping the thrills (e.g. watching the dumb blonde and the jock get it on before meeting a bloody fate) intact. And then on a different level, it seems to critique the modern-day audience’s insatiable appetite for carnage and ritualised violence- while taking jabs at their concomitant thirst for reality-TV.

Yet there is really much more than meets the eye, and the last 20 mins of the film is pure fanboy orgasmic delight, paying homage to every subgenre of the horror family (including those from Hollywood’s foreign cousins Japan and Sweden) while inserting a surprise cameo that is utterly befitting of the nature of the twist. Admittedly it does require some knowledge of the genre as well as an appreciation of what Wheedon and Goddard are trying to accomplish to appreciate its genius, but once you do, you can’t help but admire the thought and detail that went into the climax- and yes that’s a killer unicorn you’ll see somewhere in there too.

It’s easy for such an ambitious high-concept film to fall apart, but like the image on its poster, the many disparate layers hold together surprisingly well under Goddard’s confident direction. It is as assured a debut as any, complemented by a smart teenage cast acutely aware of just what Goddard is trying to accomplish with each frame. The scene-stealer here is Fran Kranz, whose pothead paranoiac act is blessed with some of the best one-liners in the film, not least for the fact that some of the nonsense conspiracy theories he utters turns out surprisingly prescient.

Perhaps the even more astonishing fact is that Wheedon and Goddard apparently completed the script of the film in just three days, taking a fiendishly clever meta-level approach to the horror genre and creating a game-changing exercise that puts everything you know and have come to expect from the genre in a whole new light. Scary, grotesque, bloody, gory, funny and entertaining at the same time, it is one of the most original horror films you’ve seen in a long while and the perfect jolt in the arm for a genre that’s ironically gone the way of the dead in recent times.

(Fiendishly clever and wickedly inventive, this meta-horror that puts a fresh spin on everything you love and have come to expect from the genre is also one of its most original films in a long while) 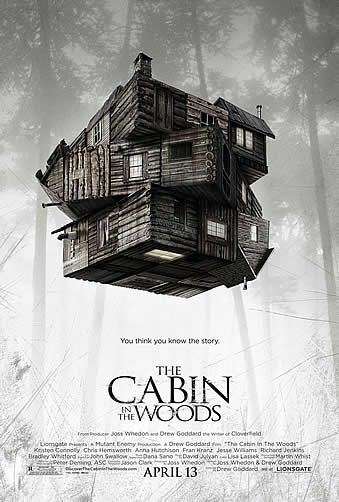 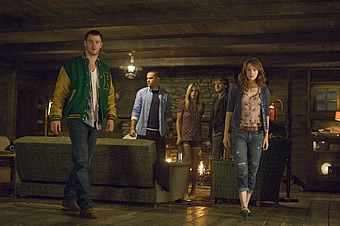