Synopsis: THE COURIER is a true-life spy thriller, the story of an unassuming British businessman Greville Wynne (Benedict Cumberbatch) recruited into one of the greatest international conflicts in history. At the behest of the UK's MI-6 and a CIA operative (Rachel Brosnahan), he forms a covert, dangerous partnership with Soviet officer Oleg Penkovsky (Merab Ninidze) in an effort to provide crucial intelligence needed to prevent a nuclear confrontation and defuse the Cuban Missile Crisis.

A prominent Hollywood male star once turned down a major Marvel role citing scheduling conflicts, press commitments and such. But all these issues don’t seem to bother Benedict Cumberbatch that much. Of course the British star has a recurring role in the MCU and he still finds the time to juggle between indie and studio productions to even Netflix to producing his own movies.

Talking about being picky or excellent time management.

Benedict Cumberbatch is astonishing as Greville Wynne, an ordinary salesman being roped in by MI6 and the CIA to spy on the Soviet nuclear programme during the Cold War. Unassuming in boring suit and tie and a sexy pornstache, Cumberbatch delivers an enigmatic performance equivalent of Gary Oldman in Tinker, Tailor Soldier Spy. Given that one of his trademarks is playing articulated and intense characters, it’s another subtle top class performance from Cumberbatch no less.

The atmospheric thriller is based on a true story. Hollywood of course loves to do true stories. But most didn’t turned out exactly that good. The Courier however will change your mind. The chain-smoking Greville Wynne is recruited to be the contact for one of Soviet’s most decorated Colonel, Oleg Penkovsky (Merab Ninidz). Penkovsky who believes that violence and war is not a thing going forward, decides to betray his country by smuggling top military secrets to MI6 and the CIA. Acting as a capitalistic businessman, Greville will have to meet up with Penkovsky regularly in Soviet Union in order to smuggle out the secrets from Penkovsky’s hands to avert a nuclear disaster.

As any good spy thrillers tell you, there’s bound to be a mole lurking somewhere that will threatened Greville’s intelligence service. But this is not the movie that focused heavily on the rotten apple. Instead, the story is more in line with the messages of friendship and peace than notorious amount of gunfire and explosions. The screenplay by Tom O’ Connor (The Hitman’s Bodyguard) established a trusting relationship between Greville and Penkovsky. Both family men who treasured their love ones and hoping for a better future for their offspring.

While The Courier is definitely engrossing, it’s not exactly fast-paced either. As good as it is, the espionage tale offers little thrills. Some might even say a little underwhelming. The production is generally on a small scale with the exception of a lavish staging of Swan Lake, a foreboding outcome to the friendship between Greville and Penkovsky. There are scenes of prison torture towards the end which are mild compared to current TV standards. Still it’s a chance for Cumberbatch to lose a few pounds and offers a bit of nudity.

Besides Cumberbatch leading the charge, American actress Rachel Brosnahan stars as a fearless CIA officer and Irish actress Jessie Buckley plays the wife of Greville who suspects him of having an affair rather than saving the world. In a funny exchange between his wife and her friend, his “energetic” performance in bed doesn’t seem to help his wife’s distrust in him. And obviously, Georgian actor Merab Ninidz is right on top of his game as the consciously torture Penkovsky.

Directed by Dominic Cooke, The Courier is a good old classic British spy thriller that ditches pyrotechnics for some mature adult narrative. The movie ends with an archive footage of the real Greville Wynne giving interviews to the media probably after his release. Even while the world is constantly in a mess, you know deep down there will always be a Greville Wynne lurking in the dark waiting to save the world someday. 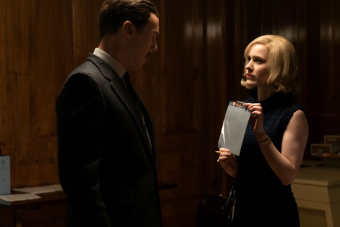 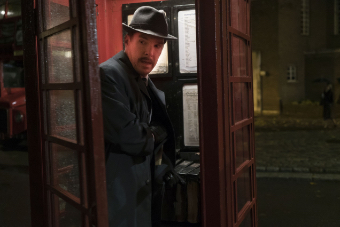