Synopsis: Directed by Steven Spielberg, BRIDGE OF SPIES is a dramatic thriller which tells the story of James Donovan (played by Tom Hanks), a Brooklyn insurance claims lawyer who finds himself thrust into the center of the Cold War when the CIA sends him on the near-impossible task to negotiate the release of a captured American U-2 pilot.

Steven Spielberg’s latest Cold War-era thriller begins with a near-wordless cat-and-mouse overture that reminds us how much of a craftsman he is. In that brilliant opening, we watch transfixed as FBI agents trail a suspected Soviet agent named Rudolf Abel through subways, sidewalks and parks of Brooklyn before finally raiding his apartment and arresting him on charges of treason and espionage. As much as you’d expect Spielberg to follow that up with screw-tightening suspense, he confounds that expectation just as quickly with a droll introduction to his lead protagonist named James Donovan, a New York insurance claims attorney arguing why the accident in which the client he is currently representing had hit a car with five people should not be referred to as “five things” but just “one thing”.

Sure enough, Spielberg doesn’t try to do a Tom Clancy with this real-life story of how Donovan came to be appointed by the Bar to represent Abel and subsequently negotiated a tricky exchange of Soviet and American spies; instead, working with a brilliantly written script by Joel and Ethan Coen with Matt Charman that adapts freely from the historical record, Spielberg mounts a handsomely old-fashioned story of righteous underdog triumph. It is a feel-good drama in every sense of the word, one that not only celebrates Donovan’s achievements but also honours the man for the principles of the U.S. Constitution for which he stood resolutely for, no matter how much others had already made up their mind about how the so-called American enemy should be treated.

Unfolding in two quite distinct halves, the first sees Donovan giving Abel a stout defence despite the CIA’s interference and presenting a compelling argument to the judge why his client should not be put to death, while setting up the circumstances by which Donovan will in fact be proven right. At what seems narratively the same time as the trial itself, the U-2 pilot Francis Gary Powers (Austin Stowell), selected as part of an elite group to take part in a top-secret mission to take highly detailed photographs of military installations within the Soviet Union, is captured by the Russians after his plane is shot down. It is not long after that the Berlin wall will be erected, which an American economics student named Richard Pryor (Will Rogers) finds himself on the wrong side of and detained by the East Germans.

And so, in the second half, Donovan is recruited by the CIA to cut a deal with the Soviets that will see the former trade Abel for Powers’ return – though Donovan decides on his own initiative to get two American men back for one Soviet spy. In contrast to the preceding half, this one is pretty much anchored through and through by Tom Hanks’ Donovan, who makes multiple trips by himself across the Berlin Wall to negotiate separate deals with a top KGB agent on the return of Powers as well as a very Western East German lawyer named Vogel (Sebastian Koch) on Pryor’s return. Donovan plays it cool in front of both the Soviets and the East Germans (what other choice does he have, really), but a scene where he is played by Vogel to be detained overnight by the East German police and another in which he watches East German refugees attempting to scale the wall being gunned down reinforces the peril within his lone-man mission as well as the complex geopolitical realities at play.

There is no secret whether Donovan manages to navigate the potentially treacherous waters (pun intended) to secure both Powers’ and Pryor’s releases – yes, the history books will already have you know that it all culminates at the Glienicke Bridge linking West Berlin with Potsdam, from which the movie takes its name. Rather than playing up the facts of the case, Spielberg opts instead to focus on the unlikely American hero with the modesty, high principles and simple fairness who would – as a post-script informs – be called upon to play yet another instrumental role in the subsequent negotiation with Fidel Castro for the ‘Bay of Pigs’ invasion. Yet Spielberg doesn’t over-emphasise these ideals to make Donovan any sort of an icon; rather, Donovan just does the right thing from moment to moment, with an uncanny ability of “feeling” the person at the other end of the negotiation.

It is the sort of role that is perfectly suited for Hanks’ Everyman charm, and the actor, here in his fourth collaboration with Spielberg, gets it down pat. Removing any hint of sanctimoniousness, Hanks puts on, on top of a warm and generous performance, an extra air of humanity to play the rookie who, though way out of his depth in the rough and murky waters of espionage, follows a clear conscience and abiding values to emerge as an admirable hero. Hanks makes it all seem so natural, but lest we take it for granted, it does require a formidable actor to play the ordinary Capra-esque hero with a dry humour and much intellect to bear. And at least for a good third of the film, Hanks is well-matched with veteran stage actor Rylance, whose understated performance as Abel is a masterclass in itself.

Indeed, there is never any doubt at any point in the film that we are amongst seasoned pros – besides Hanks and Spielberg, the latter’s long-time collaborator Janusz Kaminski on camera who achieves a thick and luxurious atmosphere with his choice of shots and colour palette. This is as assured and confident Hollywood filmmaking as it gets, whether as a gripping fact-based docudrama or as a detailed character study or even as a sober lesson on tradecraft, political ideals and personal values. It is also Spielberg’s best film in years, one that should and would see some deserved Oscar attention come next year.

(Easily one of Steven Spielberg’s best films in recent years, this Cold War-era feel-good drama is a masterclass in old-fashioned Hollywood craftsmanship, aided by a peerless performance from Tom Hanks) 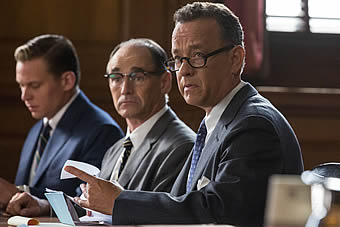