Synopsis: A prequel set before the haunting of the Lambert family that reveals how gifted psychic Elise Rainier reluctantly agrees to use her ability to contact the dead in order to help a teenage girl who has been targeted by a dangerous supernatural entity.

Rather than go Further with the ‘lipstick-face Demon’, otherwise known as the ‘Fire-Face Demon’,  co-creator Leigh Whannell takes the ‘Insidious’ franchise to the next chapter by going back in time to explore the origins of the psychic Elise Rainier (reprised by Lin Shaye). ‘Chapter 3’ is therefore set before the haunting of the Lambert family, way before that in fact, when Elise was in semi-retirement mode after being tagged by an evil spirit of her own. So when 15-year-old Quinn Brenner (Stephanie Scott) knocks on her door asking for help to contact her deceased mother, Elise turns her down at first, though she eventually relents and uses her powers to try and communicate with Lillith, whom Quinn claims has been reaching out to her the past few nights.

As you can probably guess, it isn’t Lillith that Elise realises has been trying to establish contact with Quinn, which leads Elise to issue a grave warning. “You have to be very careful,” Elise cautions. “If you call out to one of the dead, all of them can hear you.” Unfortunately for Quinn, it is already too late to simply walk away from the entity which has been masquerading as her mother and that is waiting to possess her body entirely. In fact, it only becomes clear that the entity has nothing other than malevolence on its mind – and after being the cause of an accident that causes Quinn to break one of her legs, the entity makes its presence even more obvious by appearing in form in Quinn’s bedroom and subsequently dragging her out of bed or off her wheelchair to his lair upstairs.

Like the first chapter, Whannell uses a hapless protagonist to draw in his audience’s sympathies; and whereas that person were the young boy Dalton who lay in a coma while his soul was imprisoned in the Further, it is the wheelchair-bound Quinn whose life we fear for here. Taking over Patrick Wilson’s role of the helpless parent here is Delmot Mulroney, who depends on Quinn to look after her younger brother Alex (Tate Berney) and is left struggling to come to terms with the supernatural events that are afflicting his family. Unlike Wilson’s character however, Sean (Mulroney) isn’t gifted – or cursed, depending on which way you look at it – to enter into the Further, but Whannell gives him the honour of being the one who first makes the connection between Quinn’s hauntings and the abandoned apartment unit directly above theirs.

Frankly, there isn’t anything novel that Whannell conjures here which we haven’t already seen or seen better of in the first two James Wan-directed chapters. Indeed, those who are well acquainted with Wan’s brand of horror will know that he is a master of choreographed tension, which was largely why Chapters One and Two were so edge-of-your-seat gripping. On the other hand, Whannell displays no such faculty in his directorial debut, relying largely on soundtrack cues to get a jolt out of his audience. Yes, whereas its predecessors were masterclasses in dread and suspense, this latest chapter hardly gets under your skin at all, lacking in the sort of carefully choreographed sequences which Wan excelled in.

But perhaps the most damning critique we have of Whannell’s chapter is how it really is no more than a dull retread of Wan’s superior entries. His vision of the Further isn’t much scarier than a haunted house in an amusement park, and doesn’t get much more imaginative than that as well – and if you must know, looks exactly as how you may picture the apartment building if every one of its tenants started smoking weed and getting high. His so-called finale is in fact a sequence that was much better executed by Wan in the first chapter, i.e. when Elise calls for a séance together with the rest of the members of the afflicted’s family and journeys into the Further in order to rescue the soul of the living trapped by one of the dead. It is one thing to remain faithful to an artistic vision already articulated, and quite another to reproduce it slavishly; unfortunately, Whannell happens to do most of the latter and too little of the former here.

Even as an origin story of sorts for Elise, Whannell’s film falls short. Yes, it does explain just who the old woman that was terrorising Josh Lambert (or Patrick Wilson’s character) is – even before she had her eye on Josh, she had already latched herself onto Elise. It does also explain just how Elise came to form a professional relationship with Specs (Whannell) and Tucker (Angus Sampson), the two gadgets-savvy ghostbusters who were seen in the first chapter assisting Elise and in the second avenging her death. And yet, neither of these backstories add anything more that we care about to the ‘Insidious’ mythology, such that this chapter feels no more than a placeholder for something much more substantial to come.

Whether that eventually materialises remains to be seen, since it is clear at the end of this chapter that Whannell is keen to continue the franchise by further exploring the supernatural exploits of Elise, Specs and Tucker. Yet if this chapter is anything to go by, Wan and Whannell should just have stopped at the last chapter. Not only does it feel dull and repetitive, especially if you’ve seen its predecessors, ‘Insidious: Chapter 3’ isn’t at any point genuinely scary, relying less on a careful buildup of tension to get the most out of a moment than bursting that moment in our faces with a loud shriek or music cue. Like we said at the beginning, it doesn’t quite take the franchise forward; instead, one may even argue that it moves it backward both literally and metaphorically, a shadow of what the first two chapters were. If you’re a fan, we’d advise you to stay away, for there is only disappointment waiting in this part of the Further.

(Little more than a dull and uninspired retread of the first two chapters, this third instalment doesn't so much venture into the Further than take the 'Insidious' franchise backwards into mediocrity) 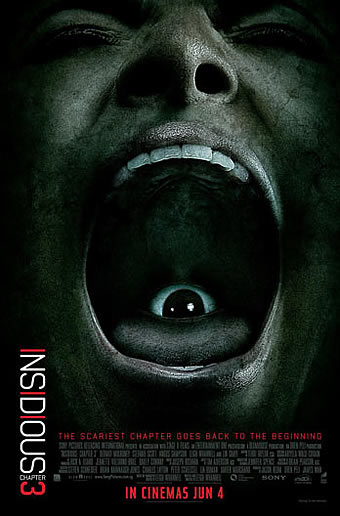