Synopsis: Marvel Studios' Black Panther follows T'Challa who, after the death of his father, the King of Wakanda, returns home to the isolated, technologically advanced African nation to succeed to the throne and take his rightful place as king. But when a powerful old enemy reappears, T'Challa's mettle as king -and Black Panther- is tested when he is drawn into a formidable conflict that puts the fate of Wakanda and the entire world at risk. Faced with treachery and danger, the young king must rally his allies and release the full power of Black Panther to defeat his foes and secure the safety of his people and their way of life.

Just when you thought Marvel has nothing new to offer anymore after 17 MCU movies. Guess what? They are still more than capable to make you, for a lack of a better word, marvel at their latest outing.

Black Panther begins right after the events of Captain America: Civil War. If you need some sort of quick refresher, this is the one where Captain America and his followers went rouge and the character of Black Panther aka T’Challa (Chadwick Boseman) makes his debut. With the death of his father, its time for T’Challa to make his way back to his kingdom, the reclusive but technologically advanced Wakanda to assume the throne.

But as most comics go, with all great power comes great responsibilty. T’Challa must first battle a fellow tribe member, win back his former lover, Nakia (Lupita Nyong’o), capture an arms dealer Ulysses Klaue (Andy Serkins) before discovering a deadly secret that might trigger a world war and the loss of his throne in this tight tale spinned by director and writer Ryan Coogler (Fruitvale Station, Creed).

It’s a surprise that Coogler is given much free play with the movie that Black Panther stood proudly as a Ryan Coogler movie than just another forgettable Marvel entry in the immensely popular MCU universe. It’s the same feeling you get when you watched the first Iron Man and Captain America, the kind of electrifying feeling of something cutting-edge and revitalizing in terms of storytelling and execution. Coogler successfully created an entire new world filled with various African cultures in a fictional part of Africa, Wakanda from glorious display of colorful costumes to out-of-this-world architectural wonders.

Despite the often-lush visual effects and fascinating production values on display, Coogler’s main aim however is to tell a story that contains lots of heart, espionage and messages. With a slight detour to Busan where a long chase after the villainous Ulysses Klaue happened, we don’t really see much of the movie’s ultimate antagonist, Erik “Killmonger” Stevens (Michael B. Jordan) until the middle. We know Marvel has a long-standing issue with their movie’s baddies but the character of Killmonger actually has a genuine purpose to confront King T’Challa. Be it their past feud or the desire to open up Wakanda to the world who only knew them as a third world country.

The superhero flick is also not without any humour. Most of the hilarious one-liners come courtesy of T’Challa’s playful sister and inventor, Shuri (Letitia Wright). And just when you think that all the female players here are just for show or to make up the cast members, Shuri amazed everyone with her clever use of vibranium, the intriguing powerful element only available in Wakanda. The Walking Dead’s Danai Gurira shines as a kick-ass head of the royal guards while Nakia is no simple token female lead either.

Of course, Black Panther does have its fair share of flaws for fellow loyal Marvel fans if you love all the mayhem displayed in Thor: Ragnarok or the second Guardians outing. Likely the lack of thrilling action sequences (beside the above mentioned chase) and some less than convincing CG in the finale battle between Black Panther and Killmonger might be a tad too disappointing for some. At times, it doesn’t even fare like a movie belonging in the MCU universe or trying desperately to shoehorn into Infinity War that any non-followers can enjoy the movie without worrying about the fate of the other superheroes.

Basically, Coogler has made a compeling big budgeted movie empowering females and African-Americans as a whole even though many might just dismissed it as a mere superhero flick. There’s great acting from Chadwick and a great uplifting screen presence by Jordan, lots of great performance by the supporting cast including Martin Freeman returning as CIA Agent Ross. Most important of all, an action superhero flick that contains meaningful messages for all and an obvious jab at President Donald Trump in the mid-credit scene.

(Kowtow to the King of Wakanda and be spellbound) 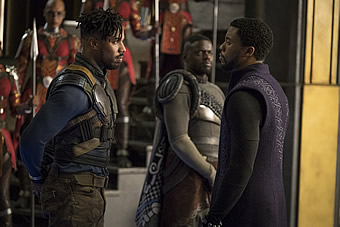 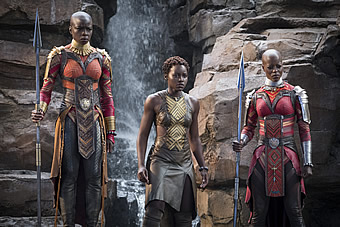