Synopsis:  Horrible Bosses’ Jason Bateman and Bridesmaids’ Melissa McCarthy lead the cast of IDENTITY THIEF, an all-star comedy in which a regular guy is forced to extreme measures to clear his name. With everything to lose after his identity is stolen, he’ll find out how crazed you can get trying to settle a bad credit score.

We remember laughing in stitches whenever American actress Melissa McCarthy appeared on screen in the hilarious comedy Bridesmaids (2011). Come on, who wouldn’t break a chuckle seeing a big sized lady emptying her bowels? For that, McCarthy received an Oscar nomination. We also remember sniggering at the poor dude played by American actor Jason Bateman in the black comedy Horrible Bosses (2011). Seeing how the advertising executive was manipulated into jumping through hoops just to get a promotion his boss never intended to give evoked, well, a sense of empathy.

The story’s protagonist is mild mannered businessman Sandy Patterson, who takes the effort to travel from Denverto Miamito confront a deceptively harmless looking (may we add, chubby) woman who has been living a luxurious life, thanks to Sandy’s credit card. He is determined to get his identity back, and what ensues is a listlessly lethargic road movie which lasted half an hour too long.

We can’t really blame McCarthy and Bateman for the movie’s misfiring, because the casting of these two fine actors may be the only right thing about this otherwise dispensable production. McCarthy, as usual, has the perfect comic timing to pull of the most mundane of lines. Her screen presence isn’t just limited to her humongous size, but also her larger than life personality which resonates with the audience. Bateman doesn’t pull any surprises here as the executive hell bent on getting justice, but it is not difficult to side with the poor guy after all the trouble flying in his face.

It is most unfortunate then, that the two leads do not have enough chemistry between them to sustain the entire movie. They may not be the prettiest eye candy in Hollywood these days, but their individual charisma stand out nicely, but sadly do not complement each other in this misguided screenplay written by Craig Mazin, whose credits include Scary Movie 3 (and 4!), as well as The Hangover: Part II. Well, you go figure how clever this script based on real life events is.

Jon Favreau, Amanda Peet, Robert Patrick and John Cho are some of the familiar faces that appear as supporting roles. While each of their acting is commendable, the characters they play seem trivially undeveloped.

Director Seth Gordon (Four Christmases) allows the story to meander, leaving audiences occasionally frustrated by how the characters seem to be simply killing time by involving themselves in pointless tactics. The tried and tested method of chasing your antagonist whilst meeting with obstacles that will leave you less than glam seems tiresome in this comedy. The result is a comedy which tries, unsuccessfully, to be a serious and moralistic comedy. 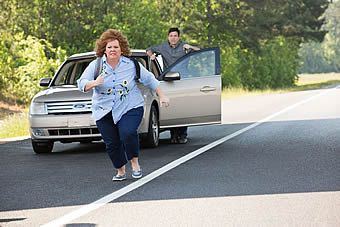 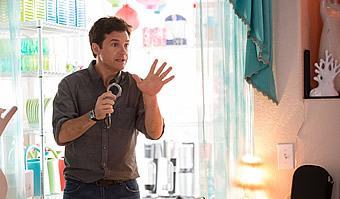 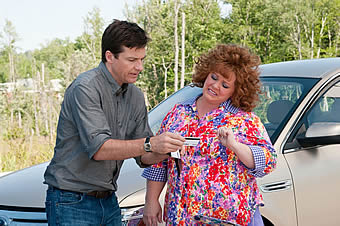