Synopsis: Martin Simmonds (Tim Roth) has been haunted throughout his life by the mysterious disappearance of his “brother” and extraordinary best friend, a Polish Jewish virtuoso violinist, Dovidl Rapaport (Clive Owen), who vanished shortly before the 1951 London debut concert that would have launched his brilliant career. Thirty-five years later, Martin discovers that Dovidl may still be alive, and sets out on an obsessive intercontinental search to find him and learn why he left.

The Song of Names is a drama with many themes: war, music and family just to name a few. It’s for sure not a perfect movie. But it’s definitely adequate enough for cinephiles who shunned the usual blockbusters, not that it’s a lot out there in 2020 anyway.

Coming from French-Canadian director Francois Girard who helmed the acclaimed The Red Violin more than two decades ago, his latest offering spans three decades and multiple countries. Sounds familiar isn’t it? Girard no doubt loves an interpersonal drama that takes viewers across time and space. The Song of Names is no exception even though the source material comes from a novel by Norman Lebrecht.

The screenplay by Jeffrey Caine (Exodus: Gods and Kings) takes us right to the beginning where the heart of the story begins in the 1950s, London. The Simmond family are waiting anxiously at the concert hall whereby prodigy violinist, Dovidl Rapoport is holding his first ever concert. However, Dovidl never appears in the end and Papa Simmond is hugely disappointed at the latter’s mysterious disappearance.

Fast forward to 1980s, Martin Simmond (Tim Roth), best friend and adopted brother of Dovidl never gives up hope on looking for Dovidl despite the passing of time. And when a young violinist shows traits of Dovidl’s playings, Martin decides to follow the leads hoping to find the whereabouts of Dovidl. The clues lead him to Poland and New York but is the real Dovidl still alive? Or is he just waiting for the right time for Martin to find him?

Girard is one filmmaker that takes his time to tell his story. In spite of it, there’s never a dull moment under Girard’s skilful direction. There are frequent flashbacks inserted to put us in the shoes of Martin and Dovidl. We watched how the two unlikely adopted brothers come to hate each other in the beginning but developed into close friends by the time they reach their teens. We learnt that Dovidl has probably lost his family during the Holocaust which explains why he chooses to abandon his religious beliefs. It also helps that the character of Martin is greatly fleshed out as well during the process rather than a simplify token character. Because of this, it gives the audiences a lot to think about the complexity of their relationship, Dovidl’s personality and inner struggle and most importantly how it’s shaped his subsequent decisions.

It’s an immensely satisfying story yet its biggest strength is also its biggest fault. The reason why Dovidl abandoned his surrogate family at the critical point of their life is an intriguing mystery worth pursuing. In all their eagerness, the filmmakers deliver a less than convincing reason as to why Dovidl left without a trace. The love and attention from the selfless Simmond family is apparently no match for his calling. Some viewers might find the interpretation highly plausible though some might find it a little dubious and selfish.

You can’t deny Tim Roth and most of the unknown young cast elevates the material with their tip-top performances. Obviously Clive Owen who plays the adult Dovidl deserved a mention. This is not exactly a spoiler since his bushy face is plastered across the poster. The production scale is sufficiently decent boasting some nice CGI background and vintage props. Girard loves his close-up shots so you won’t really missed Roth’s wrinkles or Owen’s expression hidden under all his hairy beard.

The Song of Names is somewhat a minor detective tale with mostly strong performances with an uneven mix of themes thrown in for good measure. The first half is totally a gem and while the payoff certainly fails to sweep us away, the overall effort still comes recommended.

( A fascinating drama about humans, religion and more) 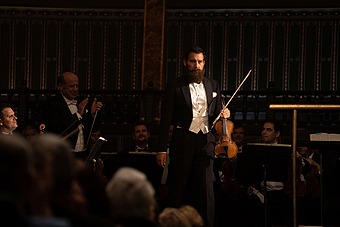