Synopsis: Based on one of the most overlooked tragedies of the 20th century, Bitter Harvest is a powerful story of love, honor, rebellion and survival as seen through the eyes of two young lovers caught in the ravages of Joseph Stalin’s genocidal policies against Ukraine in the 1930s. As Stalin advances the ambitions of communists in the Kremlin, a young artist named Yuri (Max Irons) battles to survive famine, imprisonment and torture to save his childhood sweetheart Natalka (Samantha Barks) from the “Holodomor,” the death-by-starvation program that ultimately killed millions of Ukrainians. Against this tragic backdrop, Yuri escapes from a Soviet prison and joins the anti-Bolshevik resistance movement as he battles to reunite with Natalka and continue the fight for a free Ukraine."

Because Hollywood’s fascination with Russia hasn’t moved past the Cold War and international espionage, there have been few – if any – Western films about the Holodomor, a man-made famine in Soviet Ukraine during the years 1932 to 1933 in which some seven to ten million ethnic Ukrainians were estimated to have died as a result of Joseph Stalin’s policies. At the very least, co-writer and director George Menduluk deserves credit for shining light on the subject, and furthermore doing so at a most prescient time when Russia’s expansive ambitions on its neighbour are once again rearing its head as seen from the actions it took to annex Crimea.

But well-intentioned as it might be, ‘Bitter Harvest’ is a bitter pill to swallow in many ways. To be sure, that is not because of the nature of the atrocities it is trying to portray; oh no, on the contrary, it is because Menduluk, who together with his co-writer Richard Bachynsky-Hoover and producer Ian Ihnatowycz are of Ukrainian descent, has mixed politics, romance, faith and famine in a most clunky and uneven manner, so much so that it is at times simply difficult to continue watching. Indeed, as well-intentioned as his movie may be, the erstwhile TV director is ultimately defeated by his own inept execution of the material, coming off no better than a mediocre Hallmark Channel movie.

That is apparent from the get-go, which sets up the simple love story between Yuri (Max Irons) and his childhood sweetheart Natalka (Samantha Barks) amidst the sun-dappled fields and folk-dancing peasants in rural Ukraine. Over cringe-worthy proclamations of the depth of his love, Yuri’s carefree life up till his teenage years seems only to be interrupted by worries over whether Natalka will let him paint her by the river in the forest beside their village or whether he should follow his friends to Kiev in order to pursue his dreams of becoming an artist. Those ambitions are supposedly at odds with that of his stoic father (Barry Pepper) and even, if not more, stern, grandfather (Terence Stamp), but neither relationship is depicted convincingly enough.

Stalin’s decision to collectivise Ukraine marks a crucial turning point that heralds the arrival of Sergei (Tamar Hassan), a brutal Soviet commissar who demands that the villagers hand over their land and their grain or be shot by his soldiers. In time, Sergei and his men will not only be responsible for killing Yuri’s father but also knocking Natalka’s father into a coma that she will never wake up from – and that is after shooting the village priest in cold blood and occasionally seizing the village women as their own. The Russians are one-dimensionally evil of course, but again the depiction of that callousness is somewhat muted when the death of every principal supporting character (and that includes Yuri and Natalka’s aforementioned relations) is marked by some prop splattered with fake metonymic blood.

It also doesn’t make sense narratively that Yuri should leave the village and go enrol in some art college in Kiev when there is danger right at the village doorstep, instead of staying put and ensuring that his family as well as that of his newly-wed bride Natalka remain out of harm’s way. Just so we can see too how bad things are in the city, Yuri ups and goes before the famine hits, eventually joining the anti-Bolshevik resistance and getting thrown into prison for stabbing a Russian officer to death. In the meantime, Sergei makes overtures at Natalka, who responds by poisoning his borscht soup and organising her own resistance against the former (which only succeeds at getting herself and her family arrested and her needing to redeem her way out by swallowing her dignity and washing Sergei’s feet with her hair).

In case it isn’t apparent yet, there is little hint of subtlety here, but the emotional manipulations would not be so frustrating were they not so clumsily performed. As if afraid that we will forget how much Yuri and Natalka pine for each other, we have to endure Yuri’s voiceover from time to time about how much he misses her and wishes that she write more often (how about going back to the village to visit?). As if afraid that we forget how vile Stalin was, we have to endure occasional cutaways to a bushy-moustachioed Gary Oliver from time to time talking about how he doesn’t care of the sufferings of the Ukrainians and only about how the famine will help to put down Ukrainian nationalism. Worse still, the horrific results of the Holodomor are inexplicably glossed over, left for the end credits when we are told just how extensive the toll of the famine was on the Ukrainian people.

There is but one saving grace here, and that is British cinematographer Douglas Milsome’s on-location visuals. We’re not even going to start with the acting, which is cartoonish at best and dreadful at worst, in large part due to Irons’ inability to emote and his non-existent chemistry with Barks. Like we said at the start, ‘Bitter Harvest’ is a bitter pill to swallow in many ways, and despite shedding light on a timely and worthy subject, there is very little from a creative standpoint to embrace his poorly made historical romance drama. And that is truly a pity, for not only is it a missed opportunity, it is a dishonor to the millions who perished and deserve a better memorial to their name.

(Clunky, manipulative and heavy-handed, this terribly inept film of a worthy and timely subject of the Holomodor is an embarrassment on itself, and a disservice to the millions of people who died during that period) 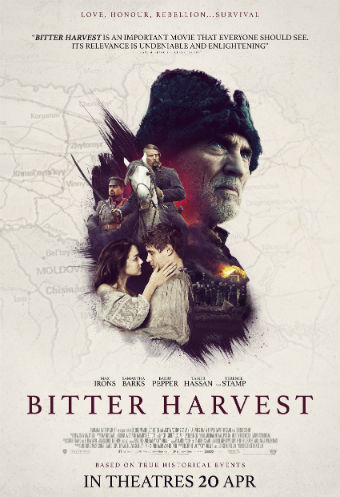 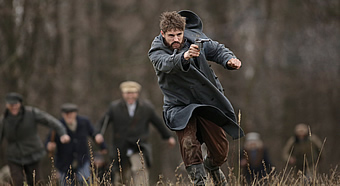