Synopsis: Berlin 1940. The city is paralyzed by fear. Otto and Anna Quangel are a working class couple living in a shabby apartment block trying, like everyone else, to stay out of trouble under Nazi rule. But when their only child is killed fighting at the front, their loss drives them to an extraordinary act of resistance. They start to drop anonymous postcards all over the city attacking Hitler and his regime. If caught, it means certain execution. Soon their campaign comes to the attention of the Gestapo inspector Escherich and a murderous game of cat-and-mouse begins. But the game serves only to strengthen Otto and Anna’s sense of purpose and a renewed love for each other. Slowly their drab lives and marriage are transformed as they unite in their quiet but profound rebellion…

Forming the basis of this World War II resistance drama is the true story of Otto and Elise Hampel, an ordinary working-class German couple who jointly penned and distributed anti-Hitler slogans on postcards for two years before being tried of treason and executed by guillotine. Their campaign of silent revolt was documented in Hans Fallada’s 1947 book ‘Every Man Dies Alone’ (though not translated in English until 2009), which has in fact been filmed no less than four times in German as well as Czech. Considering the potential of its source material, as well as its precedence, it is even more disappointing that Swiss actor Vincent Perez’s first English-language adaptation of the book is so dramatically inert – and that is, in spite of fine performances from British veterans Brendan Gleeson and Emma Thompson as the lead couple Otto and Anna respectively.

Whereas it was the death of Elise’s brother which sparked their anger at the Nazi party, both Fallada’s book and Perez’s film configures the death to be that of their only son, who in the prologue is seen running terrified through a French forest before being shot down. Word of his death reaches his parents through their quietly anti-Nazi postwoman Eva (Katrin Pollitt) just as the country is celebrating France’s defeat, leaving Anna immediately devastated and Otto simmering with resentment. The mild-mannered factory foreman not only refuses to join the party when asked to at his workplace, but initiates putting pen to paper to voice his opposition, going from altering the word Führer at his desk to Lügner (“liar”) to scrawling messages such as “The Führer will murder your son, too” and “Stop the war machine” in a deliberately crude graphic style on an eventual total of 285 postcards. Anna will join Otto in disseminating these postcards, despite her membership in the Nazi Women’s League.

From the perspective of husband and wife, Perez and his co-writer Achim von Borries aim to depict how grief has ironically brought Otto and Anna closer together than they were before, but that dimension is too muted to be compelling. Too little is shown of how they were before and how they are changed, leaving unfortunately too much to our imagination of how their shared loss and consequent worldview gives them common purpose. Ditto the fate of their older Jewish neighbour Frau Rosenthal (Monique Chaumette) – whom the Quangels and a retired judge try in vain to protect from Nazi harassment – that fails too to add to their supposed shared sense of mission. There is also only so much that Gleeson’s stoic dignity and Thompson’s fretful frailty can compensate for their skimpily defined characters, which leave us indifferent to their emotional and/or physical plight.

Just as poorly sketched is the young police inspector Escherich (Daniel Bruhl), tasked by the SS to identify and capture those responsible for the cards whom he calls ‘hobgoblin’. Escherich’s pursuit of his elusive subject(s) is driven less by personal belief than professional pride, and the ending makes clear that he also experiences a crisis of conscience along the way, in particular as he is commanded by the Gestapo to execute extra-judicially a man whom he knows had nothing to do with the cards in the first place. And yet that tension between his personal and professional convictions never quite plays out as powerfully as it should, so much so that Escherich becomes, like Frau earlier on, no more than an embellishing subplot which in effect adds little to the overall plotting, or worse, an unnecessary interlude that only distracts from the perilous mission which the Quangels have chosen.

It speaks of the sort of the film ‘Alone in Berlin’ is that a German actor like Bruhl speaks in German-accented English throughout the film. Oh yes, this is the sort of European war movie told with class and restraint and with every attempt to be tasteful, reflected here in Christophe Beaucarne's gentle cinematography and Alexandre Desplat’s sombre score. That it is comfortable with being more affected than authentic really isn’t a bad thing in and of itself, but neither does it explain why the storytelling is so staid, where even the scenes of Otto depositing his postcards in and around Berlin that lend themselves naturally to some degree of narrative tension are told stodgily. Because it is told with such detachment, we are left aloof and nonchalant, ultimately doing little justice to the true story to which it owes its debt or to the book which would hardly be as dour or monotonous as this adaptation is.

(Perplexingly devoid of any narrative tension, this WWII resistance drama squanders fine performances from Brendan Gleeson and Emma Thompson in favour of dull and dour monotony) 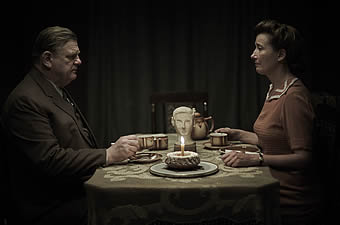 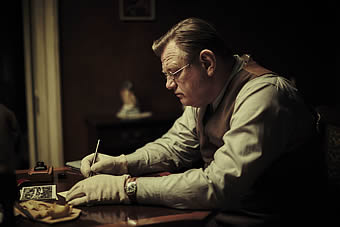 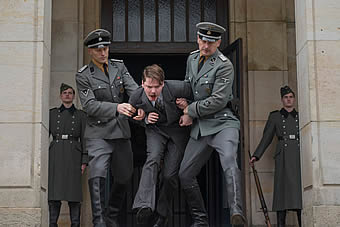 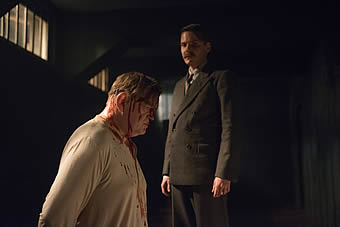 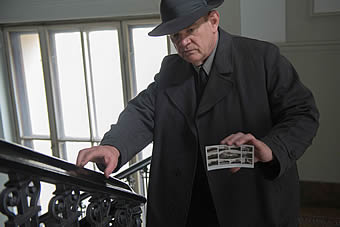 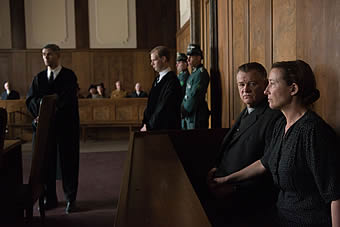