Synopsis: THE MAURITANIAN follows the remarkable true story of Mohamedou Ould Slahi (Tahar Rahim) who was captured by the U.S. government and imprisoned for years without trial at Guantanamo Bay (GTMO). It is an inspiring account of survival against all odds as Slahi, in his fight for freedom, finds allies in defence attorney Nancy Hollander (Jodie Foster) and her associate Teri Duncan (Shailene Woodley). Through Nancy and Teri’s controversial advocacy and evidence uncovered by formidable military prosecutor Lieutenant Colonel Stuart Couch (Benedict Cumberbatch), a shocking and far-reaching conspiracy is revealed. THE MAURITANIAN is a commentary on the importance of the Rule of Law and extremism of all kinds, but is also a tender, funny, uplifting film about Mohamedou, an extraordinary man whose humanity triumphed, leaving those around him profoundly changed.

At the heart of ‘The Mauritanian’ is a compelling story that needs to be told, if anything to underscore how little moral authority the world’s largest democracy really has.

Based on the New York Times bestselling memoir ‘Guantanamo Diary’, it tells the true story of Mohamedou Ould Salahi, who was pulled away from a wedding celebration in his home country Mauritania and transferred via Jordan to the infamous naval base facility in Cuba, where he spent the next 14 years without ever being charged with a crime.

Salahi was suspected of helping to recruit the 9/11 hijackers for Al Qaeda – his was one of the numbers that his cousin had called from Osama bin Laden’s satellite phone, and he had once shared his apartment in Germany with certain individuals who would go on to join Al Qaeda.

It is not difficult to see why Oscar-winning director Kevin Macdonald would be well-suited for the subject matter – not only is the Scottish director a brilliant documentarian of such acclaimed works as ‘One Day in September’ and ‘Touching the Void’, he has also helmed similar fact-based political thrillers like ‘The Last King of Scotland’.

Alas, ‘The Mauritanian’ turns out far less gripping than you would expect it to. A large part of it is due to how the movie – scripted by Rory Haines, Sohrab Noshirvani, and journalist M.B. Traven (the latter also receiving a ‘story by’ credit) – is plotted as a combination of three overlapping storylines that inevitably end up competing for one another’s attention.

There is criminal defense attorney Nancy Hollander (Jodie Foster) struggling to build Salahi’s case against the US government; there is also another that has the lead prosecutor for the government Lt Stuart Couch (Benedict Cumberbatch) being stymied by his very own colleagues; and last but not least, there is Salahi himself as he cycles between hope and scepticism wondering if the trial is indeed a chance for him to clear his name.

Contrary to what you may be expecting, Hollander and Couch never do face off in the courtroom, as the latter was taken off the case after he concluded to his superiors that they did not have enough to charge Salahi. Instead, therefore, the climax here is portraying what duress Salahi was subject to that led to his ‘confession’ – a combination of sleep deprivation, stress positions, beatings, waterboarding, sexual humiliation and non-stop loud music.

It is harrowing all right, but the build-up to the third act is pretty monotonous, involving both Hollander and Couch making their separate requests to review the boxes of case files on Salahi that the military have either classified as ‘secret’ or redacted heavily. To juice up the proceedings, there is some cheap suspense thrown in to cast doubt on Salahi’s innocence, mostly in the form of Hollander’s assistant Teri Duncan (Shailene Woodley) having second thoughts of defending Salahi.

Yet without digging deeper into Hollander’s motivations behind her pro bono mission to make sure that no one’s constitutional rights are denied, or Couch’s moral convictions that would eventually inhibit him from performing his professional duties, these separate plotlines ultimately just distract us from getting to know Salahi better. We end up therefore not knowing what went through Salahi’s mind as he was being put through hell, or how the whole experience had changed his state of mind or outlook thereafter. That lack of insight is ultimately disappointing, especially since you’d probably be primed for a character study on Salahi himself given the title of the film.

Despite putting in strong supporting performances, neither Foster or Cumberbatch can make up for the film’s issue of perspective, not least because the script gives either of them little to work with to make their characters more rounded. They are also outshone by French actor Tahar Rahim, who is fascinating to watch as Salahi, bringing wit, humour and soul to a character unjustly deprived of a more nuanced treatment in a movie to his name. Rahim is memorable and intense despite the film’s shortcomings, generating much sympathy for Salahi even before his innocence is made clear.

So despite a story that deserves to be known, ‘The Mauritanian’ falls short of being compelling; in fact, you’ll walk away distinctly underwhelmed by its superficial treatment of Salahi, of whom we get little insight of even after two hours of the movie. That isn’t to say that it isn’t watchable, or steadily paced to be able to hold your attention for two hours, but we expected much more from a filmmaker of Macdonald’s calibre working with such sensational material. Especially with such big-name stars, as well as Rahim’s brilliant performance, this legal thriller ought to be a lot more gripping.

(Steadily paced and with strong performances, 'The Mauritanian' nonetheless ought to have been a lot more powerful given the compelling material it is based on) 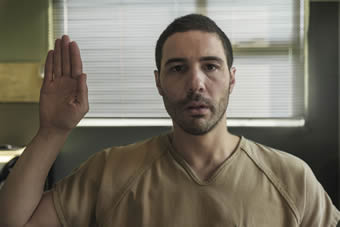