Synopsis: A house is cursed by a vengeful ghost that dooms those who enter it with a violent death.

By now, you’d probably know how ‘The Grudge’ works: when someone dies in the grip of a powerful rage, a curse is born, and that curse gathers in the place of death, passing onto whoever enters that misbegotten place. Though no less than seven films (four Japanese and three Hollywood ones) have been built on that same formula, this reboot from producer Sam Raimi (who also produced the first two Hollywood remakes) and director Nicholas Pesce makes no attempt to refresh or put a creative spin on it; instead, Pesce, who also co-wrote the movie, seems content to simply ‘copy’ the non-linear, episodic structure of Takashi Shimizu’s original.

There is the caretaker Fiona Landers (Tara Westwood), who emerges from the iconic Saeki household in Tokyo in 2004 and brings the curse back to her house in Pennsylvania; there is the real estate couple Peter (John Cho) and Nina Spencer (Betty Gilpin), who are trying to sell the same house while coping with Nina’s possibly ALD pregnancy; there is the elderly couple William (Frankie Faison) and Faith Matheson (Lin Shaye), who hires a ‘compassion caregiver’ (Jacki Weaver) to assist them with dying; and last but not least, there is a female detective Muldoon (Andrea Riseborough), who is teamed with veteran detective Goodman (Demian Bichir) to investigate the unnatural death of a woman.

It isn’t difficult to guess how these stories are connected to one another; indeed, there are obvious cues which comes after the other, or more precisely, how the curse was passed from one individual or family to the next. Without that element of surprise, much rests on the characters themselves to keep us engaged, and that is precisely where the movie falls short. None of the characters – not even Muldoon, whom we probably spend the most time with – are given enough depth for us to identify with, such that we hardly care about the fate which will eventually befall them. It isn’t just the sheer number of characters which are simply dumped at us; it is also how their stories unfold, which frankly are treated simply as devices for jump scares.

Oh yes, rather than build tension and suspense, Pesce has a penchant for going ‘boo’ at you, which frankly feels less exhilarating than tiring. It doesn’t help that many of the scary scenes are more or less a retread of what had been done before, such as that with a long-haired woman submerged within a bathtub or the other with a man in the shower who feels a number of fingers poking through his hair. Especially for those who have seen the earlier movies, there is little that is truly new here, which only makes you wonder why they had even bothered to remake this in the first place. Not even an effectively creepy score by The Newton Brothers can make up for the lack of original scares here.

And that is a pity, because Pesce has managed to assemble an unexpectedly solid cast for his reboot. Shaye is wasted in an underwritten role which basically requires her to stare blankly; while Weaver is similarly underutilised in a story which goes nowhere. Cho lends an effectively empathetic presence as a soon-to-be parent who has to decide whether to keep or abort his unborn child, but Pesce and his co-writer Buhler don’t seem to know how to integrate that into his encounters with the vengeful spirits. While it may seem that Riseborough and Bichir anchor the main narrative, they eventually get short shrift by having to share their time with Goodman’s former partner Detective Wilson (William Sadler).

We have nothing against remakes, just not one which is as lazy and uninspired as this. Those who have seen the earlier movies will probably find that this latest addition adds little to the canon; while those who are new to the franchise will probably be puzzled just how it has managed to acquire such cult status if this is all there is. Ironically, the non-linear storytelling that made the original so intriguing becomes an utter chore here, forcing us to flit from one underwhelming subplot to another without ever bothering to impress us why we should even care in the first place. Than have you in its grip, ‘The Grudge’ will have you begrudging it for wasting one and a half hours of your time.

(An almost scare-less retread of the original, this reboot will leave you begrudging it for wasting a good one and a half hours of your time) 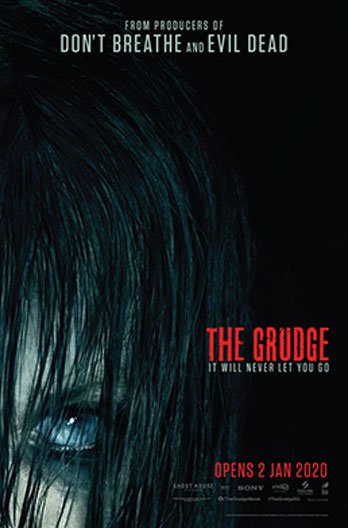