Synopsis: A trio of reckless thieves breaks into the house of a wealthy blind man, thinking they’ll get away with the perfect heist. They’re wrong.

Don’t Breathe is the first feature since Fede Alvarez’s Evil Dead (2013), an intense thriller known for its bloodshed. Despite having aspirations to work on big budgeted projects, Fede Alvarez ended up creating this rather low budget thriller. The style of the movie is consistent with the director’s other works, and proves itself to be a unique horror movie. The narrative follows three thieves, Rocky, Alex and Money, who break into houses of wealthy people to steal their material possessions. Money then received an insider’s scoop on a blind man living in a quiet neighborhood, who keeps lots of cash in the house from the money he received in a settlement case. Though Alex was reluctant at first, he decided to hop on this break-in so he could help Rocky gather the money she needs to lead a new life out of this town.

The narrative itself is actually dull in flavor. However, as the story progresses and they make their break in to the blind man’s house where bulk of the action happens. The build up to that was well paced and exemplary. The ability to hold and sustain the suspense was also impressive.

Just when you thought the story is going to reach a stalemate, there comes another surprise around the corner and plot twist. The twists and mind-bending sequences pack a punch and are nothing short of insane. One of the most memorable scenes would be the one which the characters really have to guard against the blind man in the dark. Using sounds over visuals to bring out the fear of the unknown and being afraid of what the eyes cannot see was fantastic.

The only lackluster part would be because there is so much effort spent on maintaining the high tension and suspense, the story suffers. Though the plot twists were rather unpredictable and mind-blowing at first, too many of it actually got a little bit tiresome nearing the end. As a standalone, there is not much charm to the story.

To sum this movie in one phrase: it’s pure insanity. From the story building to the suspense and action sequences, it’s one that you have to watch to experience. Fede Alvarez steered away from the intense gore and successfully delivered a thriller-horror that hooks.

(Brace yourself for pure insanity) 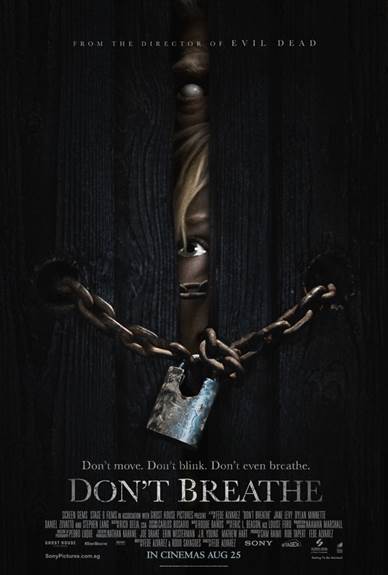