Synopsis: We all have a superhero inside us, it just takes a bit of magic to bring it out. In Billy Batson’s case, by shouting out one word—SHAZAM!—this streetwise 14-year-old foster kid can turn into the adult Super Hero Shazam, courtesy of an ancient wizard. Still a kid at heart—inside a ripped, godlike body—Shazam revels in this adult version of himself by doing what any teen would do with superpowers: have fun with them! Can he fly? Does he have X-ray vision? Can he shoot lightning out of his hands (yes!)? Can he skip class? With the help of superhero enthusiast friend Freddy, Shazam sets out to test the limits of his abilities with the joyful recklessness of the child he is inside. But he’ll need to master them quickly to fight the deadly forces of evil controlled by Dr. Thaddeus Sivana, who’s got his eye on Shazam’s powers and wants them for himself.

He may not be as well-known as Batman or Superman, but Shazam (formerly known as Captain Marvel) is one of the oldest superheroes still in print. Most recently reimagined by DC Films producer Geoff Johns and Gary Frank in their 2011 ‘Shazam!’ series, the titular superhero is the alter ego of foster kid Billy Batson (Asher Angel), a good-hearted orphan who is gifted with the power of transforming into an invulnerable adult by an ancient Wizard (Djimon Hounsou). That premise isn’t so much about the fate of the cosmos than it is about the superhero dream – or more simply, a kid’s wish-fulfilment fantasy about gaining powers beyond his imagination.

It is with that same ideal in mind that director David F. Sandberg has crafted this origin story, which imagines Billy (Asher Angel) as a wayward teenager bouncing around from home to home trying to track down the mother he was separated from as a child. His latest guardians are Rosa and Victor Vasquez (Marta Milans and Cooper Andrews), who themselves having been through the foster system are now raising a family of four other fosters, including the video-game obsessed Eugene (Ian Chen), the talkative and adorable pipsqueak Darla (Faithe Herman), the shy and quiet Pedro (Jovan Armand), and the ambitious college-age big-sister Mary (Grace Fulton).

But it is the disabled superhero aficionado Freddy (Jack Dylan Grazer) – who wears Aquaman t-shirts, hangs Batman posters on his wall, and owns a bullet that supposedly bounced off Superman himself – that will become instrumental to Billy’s character transformation. Oh yes, while the Wizard may have given him the whole get-up from body to costume to superpowers, it is with and through Freddy that Billy will truly acquire the mettle of a superhero, though not without some brotherly rivalry in the process. The relationship between Billy and Freddy is one of the key backbones of the film, spanning their earlier playful moments exploring the nature of Billy’s powers to their more sober encounters with the film’s supervillain Sivana (Mark Strong).

As Billy explains, every good guy needs a supervillain, and the film has taken its own advice to heart, taking pains to establish Sivana as Billy’s evil complement. It even goes so far as to devote its opening sequence to depicting just how Sivana was denied the powers of Shazam after being tested by the Wizard and found not to be pure enough of heart, therefore setting the stage for his obsessive quest to obtain the mythical strengths which he was denied. Eventually though, Sivana becomes empowered by the Seven Deadly Sins, personified by seven gargoyle-like monsters which set out to get Billy to surrender his powers before he learns how to use them fully.

The antagonistic dynamic between Billy and Sivana is also key to the movie, which establishes both as children who were rendered powerless by their circumstances and who seek to regain control over their fate. Whereas Billy refuses to give up on the search for his biological mother, Sivana grew up as a child looked down upon by his harsh father and his browbeating older brother, and his desperate search of power is really a reflection of his fear of inadequacy and weakness. Yet they are differentiated by both their temperament and the choices they make, which sets them on a collision course that culminates in a mano-a-mano CGI-fuelled climax amidst the skyscrapers of downtown Philadelphia.

But what truly holds the movie together is the rapport between Billy and his ultra-buff alter-ego, the latter of which not only amplifies his childlike wonder after being bequeathed such powers beyond his wildest imagination, but also his insecurities as a teenager still trying to find and define his place in the world. It is no small feat lining up their performances, but Angel and Levi play it so beautifully that you never forget who Billy really is even behind the superhero persona. In fact, along with Freddy, they form a wondrous trifecta in fleshing out what is essentially a coming-of-age story about choosing the sort of person we want to be and the family to which we want to belong.

Ultimately, however well-written the story may be (with full credit to screenwriter Henry Gayden and story contributor Darren Lemke), it is the chemistry between and among the various incredible cast members that bring it home. Most importantly, you’ll embrace how Asher/ Levi and Grazer portray Billy and Freddy growing into brothers, smiling through their adolescent exploits of buying beer, sneaking out of school and even getting into a strip club, and cheering on their litany of hilarious experiments putting Billy’s newfound powers to the test. Besides Grazer, every other member of Billy’s foster family brings real humanity to the story, which pays off in a big moment in the finale that is best discovered by yourself.

So while clearly belonging in the same universe as Batman and Superman (which Sandberg has fun referencing several times), ‘Shazam!’ doesn’t try to emulate its bigger-scale counterparts, and instead revels in being a fun, wondrous and heartfelt adventure of an ordinary teenager suddenly given superhuman abilities. At a time when so many superhero movies seem to dangle the fate of the universe at their disposal, it is refreshing to find one that is a lot more intimate, relatable and realistic. And like we said, what further elevates it is that irrepressible sense of warmth it is suffused with, with a poignant message about who we call family and how family reflects who we are. The kid in you will love it, and so will your kids, so just say the word…

(The most fun any superhero movie has been in a while, this earnest and heartfelt story about being gifted with the superhero dream is also a poignant lesson on family) 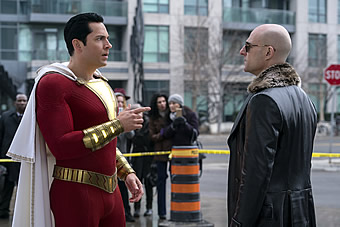 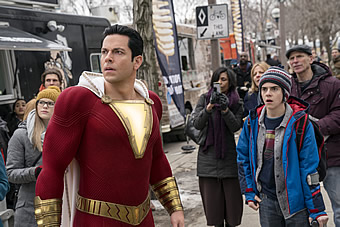 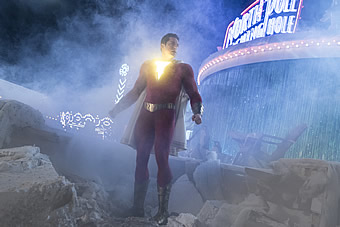 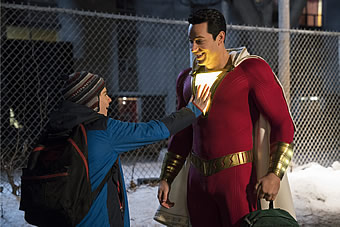