Synopsis: Primatologist Davis Okoye (Johnson), a man who keeps people at a distance, shares an unshakable bond with George, the extraordinarily intelligent, silverback gorilla who has been in his care since birth. But a rogue genetic experiment gone awry mutates this gentle ape into a raging creature of enormous size. To make matters worse, it’s soon discovered there are other similarly altered animals. As these newly created alpha predators tear across North America, destroying everything in their path, Okoye teams with a discredited genetic engineer to secure an antidote, fighting his way through an ever-changing battlefield, not only to halt a global catastrophe but to save the fearsome creature that was once his friend.

Big, loud and dumb monster movies hardly get bigger, louder and/or dumber than Dwayne Johnson’s ‘Rampage’, which sees a nine-foot-tall gorilla, a 30-foot flying wolf and a 60-foot crocodile descend upon downtown Chicago at the same time. If that premise sounds familiar, that’s because the movie is based off the 1980s arcade game, which saw players assume the trio of mammoth beasts as they fended off military forces and tried to reduce cities into rubble. But that’s about as developed as the source material went, so no less than four writers have tried to build a story leading up to that aforementioned disaster scenario.

Far as we can tell, none of them bothered to try very hard, which shows in the half-baked plot about some genetic experimentation gone wrong. That research programme was supposed to be housed in a space station, but after things go awry, several canisters of the gene-altering serum fall on different parts of the Earth. Two land in the wilderness and another crashes into a San Diego zoo, where Johnson’s primatologist Davis Okoye has been looking after a silverback albino gorilla named George that he rescued from African poachers years ago. Overnight, George grows big and angry, as does an alpha wolf in Southern Wyoming and a crocodile in the Everglades National Park.

Conveniently, a former research scientist of the programme turns up at his doorstep to explain what had happened to George, so together with this geneticist Dr Kate Caldwell (Naomie Harris), Davis races against time to hunt for a possible antidote, stop the beasts in their rage-y rampage and avert the mother of all nuclear strikes that would otherwise level half of Chicago. Oh in case you’re wondering, the three mutant animals are being drawn to the city at the same time by a sonar beacon turned on by a villainous brother-and-sister pair (Malin Akerman and Jake Lacy) behind the programme, which happens to be located on the top of Willis Tower. Should we even bother asking why they would do this while they are still in the building?

Like we said at the start, there is no point trying to figure out the logic behind the sequence of events, or for that matter the pseudo-scientific mumbo-jumbo uttered by Dr Caldwell and/or the siblings Claire and Brett Wyden. Then again, its simplicity and even idiocy harks back to a time when all such B-monster movies cared about was the thrill of destruction, and ‘Rampage’ belongs gleefully to that category. Sure, you have Johnson doing his thing as Johnson, but the piece de resistance is watching these beasts tear down Chicago and smash Willis Tower as they scale the building. Oh yes, it does eventually come down in a cloud of debris and smoke all right, just as those wondering how a three-way confrontation among a giant ape, wolf and crocodile would look like will walk away satisfied.

After levelling San Francisco in his previous Johnson collaboration ‘San Andreas’, director Brad Peyton brings those same sensibilities to ‘Rampage’, and to his credit, delivers a succession of impressive CG-heavy set-pieces. Building up nicely from George trashing the veterinary lab in the San Diego Wildlife Preserve where he is temporarily held, the action moves to the dense forests of Wyoming where an entire team of mercenaries (whose leader is played by Joe Manganiello) is taken apart by the flying wolf, then the interior of a military cargo transport plane where George again goes berserk, and finally a non-stop slam-bang right in the heart of the Windy City. There is both scale and scope to the action-movie destruction, which Peyton and his DP Jaron Presant films cleanly and clearly with a mix of close-ups, wide shots and zoom-outs. The VFX by Weta Digital is also superior, especially the creature-on-creature action that rounds up the film.

On his part, Johnson puts on his signature brand of brawny charm, and if you’ve digged him in ‘Jumanji: Welcome to the Jungle’, you’ll similarly embrace his character here. Johnson is clearly playing it tongue-in-cheek, and he and co-star Jeffrey Dean Morgan (who plays a cowboy-styling’ loose-cannon federal agent) have a self-effacing chemistry going on throughout the film. But the central relationship of the film is that between Johnson and his primate pal (portrayed in mo-cap by Jason Liles), and the couple share a nice bromance that is instantly relatable and enjoyable. One of the few elegant touches of the movie is to have Davis and George communicate with each other in sign language, and their back-and-forth packs a satisfying LOL payoff at the end in the form of a couple of crude gestures we shall not mention here.

Indeed, if it’s big, loud and dumb fun you’re after, ‘Rampage’ is just the right movie for you. Stripped down, this is really a mashup of ‘King Kong’ and ‘Godzilla’ with a little ‘Predator’ thrown in, and it isn’t afraid to embrace its central conceit of enormous, mutated animals decimating major cities. Don’t even bother trying to pick apart the plot, or for that matter the broadly drawn characters; instead, just enjoy this piece of mindless popcorn entertainment for what it’s worth, especially the monster-palooza finale. And of course, having Johnson bring on the wisecracks amidst the chaos is just part of the fun; after all, how else would you describe the sight of a giant CGI gorilla flipping the bird, not once but twice, at him?

(Big, loud, and dumb fun – that’s what this latest Dwayne Johnson monster mashup was meant to be, and just how you’ll enjoy it) 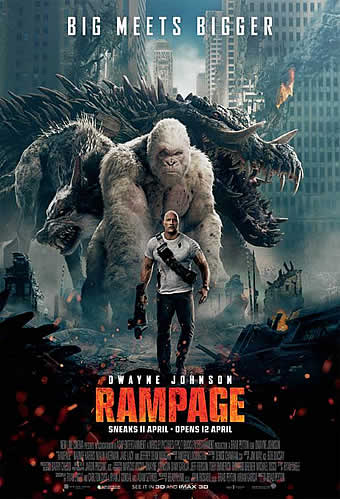