Synopsis: A follow-up to the 2009 release of G.I. JOE: RISE OF THE COBRA, which grossed over $300M worldwide, Paramount Pictures, MGM and Skydance Productions, in association with HASBRO, commenced the di Bonaventura production of G.I. JOE: RETALIATION. In this sequel, the G.I. Joes are not only fighting their mortal enemy Cobra; they are forced to contend with threats from within the government that jeopardize their very existence.  The film stars D.J. Cotrona, Byung-hun Lee, Adrianne Palicki, Ray Park, Jonathan Pryce, Ray Stevenson, Channing Tatum with Bruce Willis and Dwayne Johnson.  Directed by Jon M. Chu, and produced by Lorenzo di Bonaventura and Brian Goldner, from a screenplay by Rhett Reese & Paul Wernick based on Hasbro’s G.I. Joe® characters.

If Channing Tatum was the reason you loved ‘GI Joe: The Rise of Cobra’, we might as well give you the bad news that he dies very early in the film. That’s a real shame in our opinion, even if his substitute Dwayne Johnson is an agreeable presence to be around for two hours. The chemistry between Tatum and Johnson in the film’s opening few minutes is one of the few things that this loud-and-louder wham-bang exercise has going for it - in particular a scene in which both rib each other while playing a video game is easily the most personable moment in the film.

Still, the fall of Tatum’s Duke and the rise of Johnson’s Roadblock is but one of the revisions that both Paramount and Hasbro felt were necessary to reinvigorate what was to them a mediocre box-office success relative to the dollars that any one of their ‘Transformers’ had made. Tatum isn’t the only casualty; gone too is previous director Stephen Sommers, whose resume of ‘The Mommy’ apparently wasn’t enough to make ‘GI Joe: The Rise of Cobra’ a satisfying enough box-office juggernaut, as well as its three writers – Stuart Beattie, David Elliot, and Paul Lovett – who have been accused by fans of not being in tune enough with the spirit of the franchise.

In Sommers’ place is Jon M. Chu, best known for the two ‘Step Up’ films and that Justin Bieber documentary. Little in his filmography suggests he might bring some flair to the material, and true enough, aside from a cool vertiginous ninja fight scene up in the Himalayas, Chu hardly betters Sommers’ own workmanlike treatment. Undoubtedly the highlight of the entire film, that inspired sequence with flying ninjas is unfortunately too brief compared to the rest of the brain-numbing mayhem that we are made to endure, the majority of the film made up of frantic action that will leave you drained.

It isn’t just Chu’s middling direction that leaves one disengaged; there is also the bland script by Rhett Reese and Paul Wernick. Even if the story is no more than a narrative frame to give continuity to the non-stop destruction, that is little excuse for just how predictable it all gets – though we probably should not have expected more just by looking at how plainly the movie’s poster separates the good guys from the bad ones. Probably worse than being trite is being callous, which describes how it takes significant real-world issues – like the political instability in Pakistan or the dangers of nuclear warfare – and turns them into live-action cartoon, especially evident in the way it hardly bats an eyelid after annihilating one of the major cities of the world.

The only improvement the ‘Zombieland’ scribes bring to the table is some campy humour, which admittedly does help to enliven the otherwise deadening (pun intended) proceedings now and then. Most of these zingers are delivered with the right attitude by Johnson, whose square-jawed heroics are a perfect fit for the movie. Personifying how a G.I. doll would look like in real life and possessing the machismo of a model soldier, Johnson gets both the tongue-in-cheek parts and the ‘hoorah’ moments on the spot – so much so that he can even get away with rallying his fellow Joes by quoting Jay-Z like scripture.

Speaking of cast, it is unfortunate that only one other actor manages to be as entertaining as Johnson. That unlikely candidate is Johnathan Pryce, who is clearly having a good time playing both the real President as well as his impostor. None of the other actors – especially not Johnson’s teammates D.J. Cotrona and Adrianne Palicki – are much fun, and even the introduction of Bruce Willis late into the movie as the retired Joe founder doesn’t bring much excitement except for a briefly amusing sequence that showcases his personal weapons arsenal in his very own home.

All things considered, there are ultimately fewer bright sparks than dull sparks in this feeble attempt to inject more life into a franchise that was once meant to replace the ‘Transformers’ cash cow. Even as brainless summer blockbuster entertainment, it offers relentless action but little real thrills, coming off as a vacuous exercise in engineering destruction on a large scale for the sake of it. A Himalayan wire-ful action sequence and Dwayne Johnson do not a movie make, with little in this sequel justifying its ambition for having tried to be better than its predecessor. And if it isn’t clear yet, then let us by categorical in stating that the additional dimension – for which the movie was apparently delayed nine months for – is but yet one more dimension of dullness.

(A forgettable sequel to a forgettable movie, this is one bland action blockbuster exercise in big guns and world destruction that even the agreeably charming Dwayne Johnson cannot redeem) 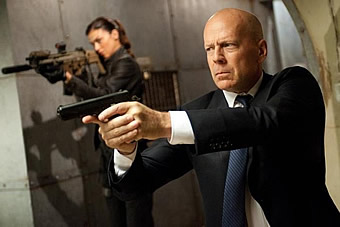 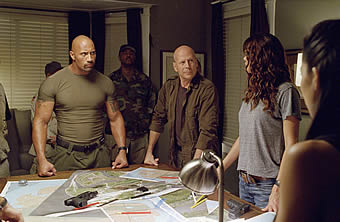