Synopsis: The follow-up to the 2008 hit. The new journey begins when young adventurer Sean (Josh Hutcherson) receives a coded distress signal from a mysterious island where no island should exist-a place of strange life forms, mountains of gold, deadly volcanoes, and more than one astonishing secret. Unable to stop him from going, Sean's new stepfather (Dwayne Johnson) joins the quest. Together with a helicopter pilot (Luis Guzman) and his beautiful, strong-willed daughter (Vanessa Hudgens), they set out to find the island, rescue its lone inhabitant and escape before seismic shockwaves force the island under the sea and bury its treasures forever.

We didn’t expect ourselves to laugh at Dwayne “The Rock” Johnson popping his pectorals in this sequel to 2008’s Journey to the Center of the Earth.

In fact, it was such a guilty pleasure that we are listing it as one of the hilarious 3D technology. In the family movie’s funniest scene, the professional wrestler demonstrates what he calls “the pec pop of love” and invites his stepson (Josh Hutcherson) to throw a berry at his glorious chest. And presto, the fruit flies in your face!

Cheap thrills aside, this action adventure movie sees Hutcherson’s adventurous teenager setting out on an expedition to find his grandfather, who went missing while exploring a lost island. Instead of Brendan Fraser (who could not return due to scheduling conflicts), he has Johnson by his side. The party also includes a love interest in the form of High School Musical’s (sorry, but that will always be the role you will be remembered for, missy) Vanessa Hudgens, as well as her comedic father played by Luis Guzman.

It has been more than 10 years since we first saw Johnson on the big screen The 1.96 meter giant played the intimidating Scorpion King back in 2001’s The Mummy Returns, and his showbiz career has never looked too bad since. We have seen him transform from not so funny (2007’s The Game Plan) to quite funny (2008’s Get Smart) to really funny (2010’s The Other Guys).

And we haven’t even mentioned his credentials as an action star.

In his latest starring role, Johnson does a decent job making the audience laugh while jumping from cliff to cliff in his tight fitting T shirt. Having successfully crossed over to mainstream popularity, the married man is increasingly likeable. How can one not smile listening to him singing “It’s a Wonderful World” by a campfire while strumming a tiny guitar?

Hutcherson has matured quite a bit since we last saw him as Fraser’s nephew in the first movie, and the 19 year old is charismatic enough to command screen presence. We are looking forward to seeing him again in the highly anticipated The Hunger Games. Meanwhile, without too much elaboration, let’s just say Hudgens’ role as the obligatory singlet wearing companion won’t be getting her any acting awards.

Let’s also not deny the fact that this Brad Peyton directed production is aimed at entertaining the masses. Predictable storyline and other family friendly elements aside, this 94 minute movie never pretends to be a sophisticated piece of work (the plot wastes no time in transporting the characters to the titular island). The references to literary classics like Robert Louis Stevenson’s Treasure Island, Jonathan Swift’s Gulliver’s Travels and Jules Vern’s Mysterious Island are not as pretentious one would expect them to be either.

There are also some decent 3D effects which complement the effective use of computer generated imageries. The humans gladly play supporting characters in these scenes. While this is definitely no technological feat, it is a likeable movie that does a respectable job of entertaining its viewers.

(A serviceable popcorn movie that offers 94 minutes of harmless fun) 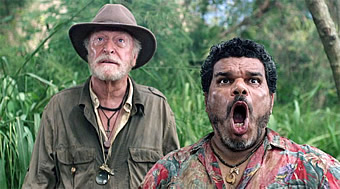 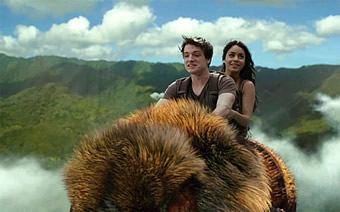 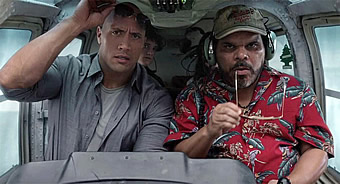 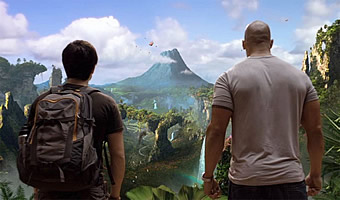