Synopsis: From the 1870s to the modern era, RADIOACTIVE is a journey through Marie Curie’s (Rosamund Pike) enduring legacies – her passionate relationships, scientific breakthroughs, and the consequences that followed for her and for the world. After meeting fellow scientist Pierre Curie (Sam Riley), the pair go on to marry and change the face of science forever by their discovery of radioactivity. The genius of the Curies’ world-changing discoveries and the ensuing Nobel Prize propels the devoted couple into the international limelight. From renowned producers, WORKING TITLE (DARKEST HOUR) and Shoebox Films (ATONEMENT), and Academy Award® nominated director, Marjane Satrapi, comes a bold, visionary depiction of the transformative effects and ensuing fallout of the Curie’s work and how this shaped the defining moments of the 20th Century.

From her Oscar nominated performance in Gone Girl to her compelling portrayal of the late journalist Marie Colvin in A Private War to being Marie Curie, the first and only woman to win the Nobel Prize twice, English actress Rosamund Pike is on a roll.

Together with her French husband and also fellow scientist Pierre Curie, Marie Sklodowska-Curie is largely known for discovering radium and polonium and under her direction, developed mobile radiography units to provide X-ray services to field hospitals during World War one. In this movie version which is directed by Marjane Satrapi (Persepolis) and adapted from the graphic novel by Lauren Redniss, Radioactive takes a non-linear approach to document the life and works of the famous scientist.

Headstrong, persistent and even arrogant according to her husband (played by Sam Riley), Curie is shown from the start as an uncompromising individual who has no qualms fighting for her rights in a field dominated by men. But it’s the love of her life, Pierre Curie that supported her career throughout until a freak accident resulting in the death of Pierre cut short their relationship and nearly toppled her career.

Perhaps it’s the death of her mother and Pierre that constantly torment Marie that she got herself into an affair with a married graduate student of Pierre and the increasingly hostility against her of being an immigrant after her success and scandal. Radioactive often falls into the conventional route. There isn’t any significant, mind-blowing accounts of Curie’s achievements or suggestions which have been left out in history books. The subject is intriguing no doubt but we can’t help feeling the by-the-numbers treatment.

Radioactive generally is a mixed bag. There’s some fantastic visuals on display however, scenes which beautifully intercut Curie’s imagination to the impact of Curie’s discovery which leads to the atomic attack on Hiroshima, the 1986 nuclear disaster at Chernobyl or the continued use of brachytherapy on cancer patients. The fusion of past and present serves as a reminder how powerful Curie’s discovery is though we can’t get a good picture of how radium and polonium actually works or how one of her daughters, Irene follows in her mother’s footsteps in the end.

Rosamund Pike is yet again the soul and star of this biopic delivering a stirring and convincing performance as an extraordinary woman who developed the theory of radioactivity. Isn’t it high time for Pike to get an Oscar for acting? Sam Riley better known for his appearance in Maleficent is more than decent as Pierre Curie while Anya Taylor-Joy (Spilt) is underused as Irene, the gutsy elder daughter who worked as a nurse and subsequently a Nobel prize winner in chemistry.

The movie feels like a lukewarm tribute to Marie Curie, unable to bring out the best of the scientific genius nor delivering the worse. It’s definitely not a ground-breaking biography for sure. You probably won’t find the material daring or provocative still the occasional dreamy visuals and metaphors plus Pike’s perfect performance does light up this title a little. 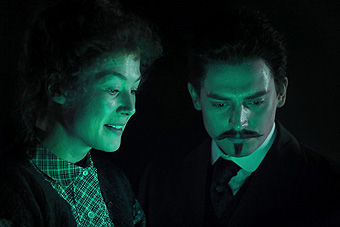