Synopsis: A beautiful young woman, driven mad by her past. An ambitious doctor on a mission to succeed. An esteemed mentor with a revolutionary cure. Let the mind games begin... Seduced by the challenge of an impossible case, the driven Dr. Jung (Michael Fassbender) takes the unbalanced yet beautiful Sabina Spielrein (Keira Knightley) as his patient. Jung's weapon is the method of his master, the renowned Sigmund Freud (Viggo Mortensen). Both men fall under Sabina's spell. Into the mix comes Otto Gross (Vincent Cassel), a debauched patient who is determined to push the boundaries. Jung gives in to lust and a passionate affair begins. Sabina becomes the catalyst for Jung's inspired theories. Meanwhile Freud goes further, delving into Sabina's brilliant mind until she can take the situation no longer. The bonds between the trio shatter. Driven by desire and revenge, with their reputations at stake, Freud and Jung embark on a battle of wills. In this dangerous game of sex and intellect, the price will be Sabina's soul.

The ‘dangerous method’ the title of this unusual David Cronenberg film refers to is psychoanalysis, pioneered by two of the founding fathers of modern-day psychology Sigmund Freud and Carl Jung. It was also more commonly known as the “talking cure”, since as a form of treatment it involved the psychiatrist inferring the cause of the patient’s psychosis from the latter’s descriptions of his or her fantasies and dreams. As adapted by Christopher Hampton from his play (which in turn was based on John Kerr’s esteemed 1994 book ‘A Most Dangerous Method’), the film is not only about the birth of psychoanalysis but also the complex relationship between Freud, Jung and their female counterpart Sabina Spielrein.

Those familiar with Freudian theory may come to expect a sexually charged depiction of the trio’s relationship, but instead of relying on theatrics, Cronenberg has admirably chosen to take an intellectual approach with the material. This means that like its subject, there is a lot of talking going on in the form of conversations, treatment sessions and letters, a deliberate technique which Cronenberg uses to force his viewer to pay attention to his characters and their interactions. It also means however that viewers more accustomed to his brand of unrestrained violence in ‘A History of Violence’ and ‘Eastern Promises’ will likely find themselves frustrated, since this is probably one of his most restrained works ever.

Hampton’s narrative unfolds through a series of episodes spanning from 1904 to the eve of World War I, beginning with the arrival of Sabina as a young Russian Jewish woman at Jung’s Burgholzli Clinic in Zurich. Sabina begins as Jung’s patient, brought writhing and howling before the calm, collected and deeply analytical doctor. Using the psychoanalytical method developed by Freud, Jung attributes her hysteria to her humiliation bred from constant beatings by her father as a child and her sexual urges to her repression of these traumatic memories. Such is the nature of Freudian theory, which of course has been criticised by later psychologists as well as Jung himself for being too “limited” in its singular focus on sexual drives.

Nevertheless, the ‘libido’ is at the heart of the unfolding affair between Jung and Sabina, sparked off after a visit to Vienna to meet Freud leads to a referral of a fellow psychiatrist Otto Gross (Vincent Cassel) who urges Jung to let go of his repression of any sexual desires he has. Meanwhile, the intelligent Sabina has grown significantly in intellect under Jung’s tutelage, and one night, Jung finally gives in to the sexual tensions lingering between them, in the process crossing the acceptable boundaries of their doctor-patient relationship. The irony is all too obvious- the analyst consumed by the very drive he has begun to disparage- and is further emphasised by Jung’s inability despite his efforts to resist his desires for Sabina.

Despite the sensationalistic nature of their illicit affair, Cronenberg largely turns down the heat in every scene- even those that depict Jung’s fulfilment of Sabina’s sadomasochistic tendencies. Logical though his decision may be, it also robs the film of any real emotional edge, so much so that the film engages the mind but not the heart of its viewer. In the absence of any palpable tension, the more compelling dynamic becomes that between Freud and Jung, one that requires the viewer to pay intense attention to the characters’ conversations and voiceovers.

Throughout the course of the film, Cronenberg charts the pair from steadfast collaborators in the promulgation of psychoanalysis to embittered foes with divergent and irreconcilable differences. Freud’s disapproval of Jung’s mystical interests aside, Freud is also subsequently appalled by Jung’s torrid relationship with Sabina, and the fact that Freud eventually agrees to Sabina’s request to take her on as his student only widens the chasm between the two intellectual equals. The ménage-a-trois is intriguing to watch to say the least, especially in how it illustrates the fragility of such alliances between great minds.

The fact that Freud and Jung turn out more convincing is also testament to the strength of Fassbender and Mortensen’s acting next to Knightley’s. Continuing his career-defining streak from last year, Fassbender once again impresses as a young analyst who becomes the personification of irony as he embraces on a physical level yet rejects on an intellectual level the sexual desires within him. In his third Cronenberg film, Mortensen steals the show with his wily portrayal of the venerable Freud, and the acerbic way he tears at Jung in his accusations of the latter’s ‘second-rate mysticism and self-aggrandizing shamanism’ is riveting to behold. The weakest link here is Knightley’s, beginning with a showy chin-jutting, face-contorting performance and then settling into a perpetually tightly-wound look that is unfortunately still unable to convince her audience that she has gotten under the skin of her complex character.

Knightley’s limitations as an actress however do not distract from the fact that this is a handsomely mounted production from a director that has always had a fascination with the matters of the mind, whether in his horror forays (“Scanners” and “The Fly”) or his examinations of primordial violence (“History of Violence” and “Eastern Promises”). Be fair warned though, it will be a challenge for contemporary audiences, given its erudite subject matter and talky approach- but those looking for something cerebral will find much intellectual stimulation in the words and thoughts of three of the foremost brilliant minds of psychology in the 20th century.

(As intellectually stimulating as a portrayal of psychoanalysis and its founders should be, this is cerebral entertainment not for the common viewer) 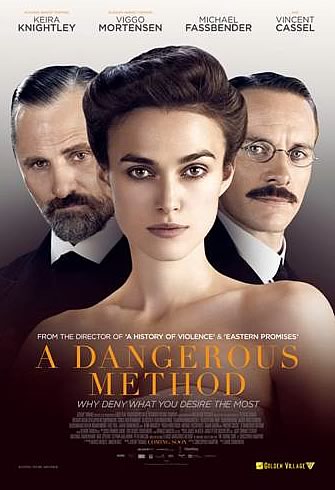 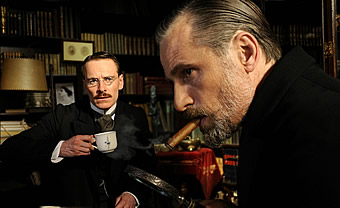 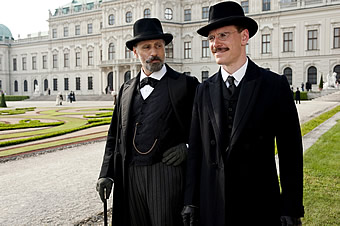 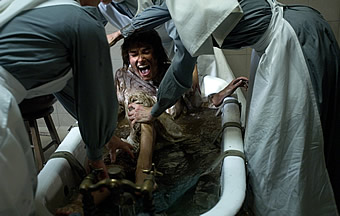 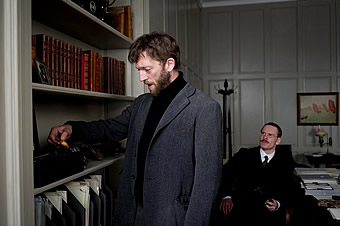 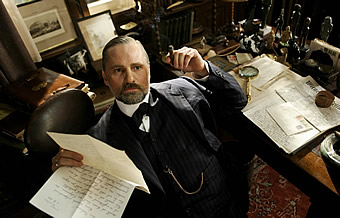