Synopsis:  In 1862, daredevil balloon pilot Amelia Wren (Academy Award Nominee Felicity Jones) teams up with pioneering meteorologist James Glaisher (Academy Award Winner Eddie Redmayne) to advance human knowledge of the weather and fly higher than anyone in history. While breaking records and furthering scientific discovery, their voyage to the very edge of existence helps the unlikely pair find their place in the world they have left far below them. But they face physical and emotional challenges in the thin air, as the ascent becomes a fight for survival.

To be honest, the trailer was a little underwhelming. The Aeronauts seemed to pitch the adventure of a lifetime in the air, and with Eddie Redmayne and Felicity Jones offering captainship, the premise seems promising.

But are a sea of clouds and fluttering butterflies enough to strike wonder in this age? With a travel-savvy crowd and one fed on a diet of epic fantasies, the journey feels it needs a little more gas in its balloon.

Fortunately, Tom Harper has crafted this Amazon film to surprisingly positive effect. I certainly wasn’t expecting my clenched fists at some of the sequences. And that is where The Aeronauts shines best at - in its action portions.

Inspired by the true efforts of meteorologist James Glaisher (Redmayne), the film is a tribute to his efforts in pioneering investigations into the science of weather, through multiple balloon trips into the sky. In the film, Amelia Rennes (Jones) is his flying partner, though in real life, Glaisher never flew with a woman. Rennes was actually heavily based off of Sophie Blanchard - a female aeronaut who was just as flamboyant as the screen persona.

By creating this partnership, I was slightly apprehensive of the inevitable romantic angle - one that I admit is sometimes forcibly inserted to fulfil the Hollywood formula, but thankfully Harper only hints at a budding relationship and keeps it there.

Instead, he focuses his attention at creating a three-fold-story: That of a widow trying to overcome her grief and a gender-stiff society, a visionary scientist attempting to win the respect of his peers, and of course, the balloon trip and the discoveries along the way.

And what a trip it is!

There’s the wondrous - a glory around their balloon shadow, ghostly city sounds floating in the clouds, and our budding pilots happily explain them (just a little shy of exposition). And then there’s the nailbiting - a raging storm that threatons to disaasemble the balloon, and the inescapable threat of frostbite and death at the higher altitudes.

All this is of course, side to the achievements both are trying to accomplish. For Glaiser, it’s the findings that can garner investment into his work, for a better andd safer world (don’t forget, this is 1862). This is so important, that carrier pigeons are sent out every time significant data is collected, in the grim case of death. For Rennes, it’s a personal journey out of the trauma of losing her husband, after their last attempt to be the first man and woman to reach the highest altitude in the air.

These moving stories aside, The Aeronauts features gripping sequences that keeps the pace from going melodramatic, and this works splendidly for myself. Whether whirling through thunderclouds or climbing the side of a balloon with frost-burnt fingers, Harper’s action is dizzying and tense, and keeps The Aeronauts… afloat.

(What seems like a personal drama flick in the air is enlivened by some truly arresting sequences. It sits nicely between story and action and worth a watch) 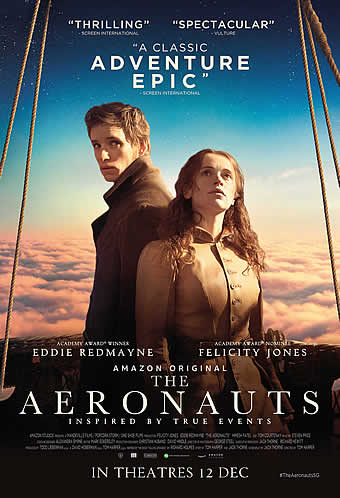 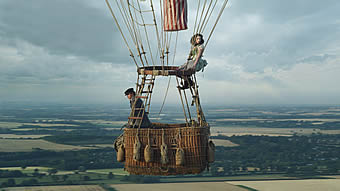 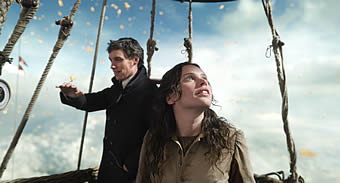