Synopsis: Inspired by a true story, QUEENPINS is an outrageous comedy about a bored and frustrated suburban homemaker, Connie (Kristen Bell) and her best pal JoJo (Kirby Howell-Baptiste), a vlogger with dreams, who turn a hobby into a multi-million dollar counterfeit coupon caper. After firing off a letter to the conglomerate behind a box of cereal gone stale, and receiving an apology along with dozens of freebies, the duo hatch an illegal coupon club scheme that scams millions from mega-corporations and delivers deals to legions of fellow coupon clippers. On the trail to total coupon dominance, a hapless Loss Prevention Officer (Paul Walter Hauser) from the local supermarket chain joins forces with a determined U.S. Postal Inspector (Vince Vaughn) in hot pursuit of these newly-minted “Queenpins” of pink collar crime.

Having a coupon means you get a discount off a particular product or getting a product for free. The coupon phenomenon might not be a thing here in Singapore but it’s indeed pretty huge in the States. It turns out 96% of Americans have used coupons. Imagine the thrill of getting a discounted/free box of cereal or detergent.

Husband and wife filmmaking team, Aron Gaudet and Gita Pullapilly based this movie on a real-life multi-million-dollar coupon scam in Phoenix which explained why this is inspired by a true story. Queenpins stars Kristen Bell (Veronica Mars and the voice behind Anna in Frozen) as a bored ex-Olympian, Connie who hatch an illegal coupon club scheme with her friend and neighbor, JoJo (Kirby Howell-Baptiste). After four failed attempts at IVF, Connie is now trapped in a loveless marriage while JoJo on the other hand is an unsuccessful beauty vlogger.

With nothing but a bleak future ahead of them, Connie came up with the crazy idea of selling discarded coupons originated from a coupon printing factory in Mexico. The idea simply is to sell them to coupon clippers via their website. And in a short span of half a year, the duo manages to accumulate millions of dollars in sales. At the same time, an overzealous lost prevention officer, Ken (Paul Walter Hauser) and a U.S. Postal Inspector Simon (Vince Vaughn) are hot on the heels of these two self-proclaimed “Queenpins”.

Queenpins basically taps into the mindset of the lower- and middle-income group who bears both the brunt of wage, savings deterioration and life dissatisfaction. It’s very much a comedy but also a social commentary on these issues although there’s lesser in terms of the latter. What’s a few millions to a mega corporation liked P&G and Nestle who “ripped” off a few hundred off an average worker a year? It’s definitely an issue which every layman can relate to even though both parties are victims in a way.

Kristen Bell is perfectly cast as Connie. Once an overachiever, Olympic race walker, her target in her mundane life now is nabbing coupons to offset her detergent purchase from her nearby grocery mart. Bell might not be a huge star but she has more than enough charm and enthusiasm to lead a movie. Kirby Howell-Baptiste absolutely nailed the part as Connie’s buddy-in-crime making both a mini gravitational force onscreen.

Interestingly, Vaughn who has been dabbling in various genres in recent years turned in a somewhat endearing yet subtly amusing performance opposite Paul Walter Hauser. While Simon is the super cool inspector, Ken who wanted to tag along is a straight face, routine kind of guy. Boring perhaps is a better word to describe Ken. No matter what, both steal the show with their constant bantering and Simon’s harmless teasing of Ken’s desire to be his deputy. Then there is Bebe Rexha who plays a paranoid cyberthief taking on an adviser role in the “Queenpins” scam. With a long laundry list of “dos” and “don’ts”, the queenpins being all confused ended up buying an entire private plane, at least six Lamborghinis and John Wick’s approved shotguns with the intention of laundering their scam money.

End of it, the movie simply is what it is. The story of a coupon scam is developed collectively through the four main characters. Thanks to Aron Gaudet and Gita Pullapilly’s careful touches, the premise of a ridiculous scam plays like a wry comedy of sorts. Definitely an OK flick for a movie night. 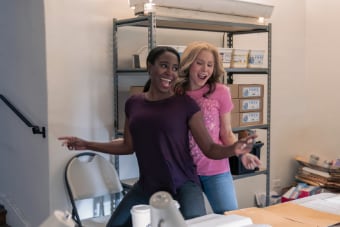 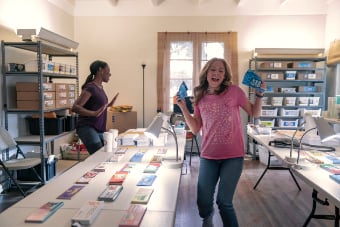 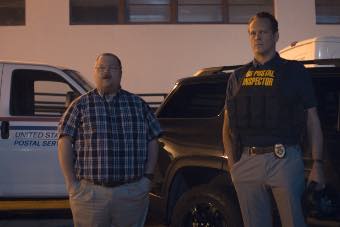 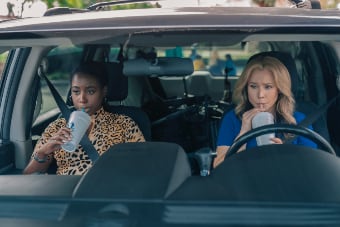