As intriguing as they may be, few stripper movies have been ultimately able to overcome the unfortunate disdain associated with their subject. That writer-director Lorene Scafaria manages not only to do so but also craft a movie that is simultaneously rousing, sobering and poignant is testament to the extent of her accomplishment here, even as she had Jessica Pressler’s acclaimed long-read New York Magazine article to work off. Oh yes, the names and locations may have been changed, but the basic premise of a crew of high-end strippers in New York who went from pole dancing to glorified pickpocketing is as real as it gets.

Told through the eyes of the aptly named Destiny (Constance Wu), the story unfolds over the course of eight years, charting her (ahem) destiny with the enterprising Ramona (Jennifer Lopez) from when they first meet in 2007 till their scam was busted by the police in 2015. Before their acquaintance, Destiny is struggling to fit in as the new girl at a glitzy strip club in Manhattan – besides being not quite as sociable as her colleagues, she isn’t quite sure what she needs to do in order to impress the clientele. So when she first experiences how Ramona wows the crowd with a jaw-droppingly sexy pole dance, it is hardly surprising that Destiny dreams of being Ramona, and over a cigarette break on the roof, asks Ramona to show her the moves.

For reasons we will only find out much later, Ramona agrees to take Destiny under her wing, teaching her such pole dancing moves as the table-top, martini glass and Peter Pan spin, as well as how to work the champagne room (“train the clock, not the cock”). In fact, both ladies find unexpected success working together in the latter, and while Destiny finally makes enough to help pay her beloved grandmother’s bills, Ramona saves enough to buy a penthouse apartment. Their friendship plays out against the club’s heydays, and together with the other girls such as Mercedes (Keke Palmer), Tracey (Trace Lysette), Liz (Lizzo) and Diamond (Cardi B), every night was a riotous one, not least that which Usher makes a surprise appearance.

If it isn’t yet obvious, there is nothing demeaning about how these characters are portrayed here; indeed, these ladies are very much in control of the clients they pleasure, and that feeling of empowerment is truly refreshing to see in a genre piece as this. Just as invigorating is the sense of camaraderie among them, as they bond over conversations in the changing room about what it means to have a boyfriend in their profession and their respective sex lives. There is vicarious fun to be had with these women – and with Ramona and Destiny, an even deeper appreciation of their self-determination – so much so that you’ll already be won over by the first act.

To her credit, Scafaria isn’t out to sentimentalise what Ramona and Destiny will get up to; rather, the intent is to establish how both of them are not shy to take charge of their own circumstances. When therefore business at the club nosedives as a result of the global financial crisis, and they are forced to confront the question of how to support their daughters as single mothers, it isn’t difficult to understand how and why they would concoct an elaborate scheme to fish men from the bars around town into the club, get them high on a mixture of MDMA and ketamine, and coax them to part with thousands of dollars on their credit cards.

Like the ‘Ocean’s Eleven’ films, there is genuine thrill in watching Ramona and Destiny develop their criminal enterprise, including recruiting other players as Mercedes and Annabelle (Lili Reinhart), experimenting with different proportions of MDMA and ketamine, and sharpening the specific beats of their nightly routine. Tempting though it may be to get carried away, the film remains grounded on the friendship between Ramona and Destiny as its emotional centre, subtly and skilfully setting the stage for their eventual rift when the law catches up to them – and make no mistake, when that time comes, there is no attempt to sugar-coat the consequences of their actions, be it on the clients they had swindled or on the legal ramifications they face.

Especially towards the end, it becomes clear that Scafaria’s choice to have Destiny recount the story through her interviews with a fictional journalist (Julia Stiles) is a neat narrative twist. In addition to lending surprising depth to her character (as Destiny reflects on the influence of her Asian-American upbringing), the first-person perspective adds poignancy to the moral dilemmas that she and her fellow scammers will inevitably confront. Are they justified in taking from those whom had arguably stolen it in the first place? Does the legitimacy of their deeds, societally or otherwise, absolve them from turning a blind eye to those whose lives they had destroyed in the process? To be sure, there are no easy answers offered, and Scafaria is wise enough to leave her audience to draw their own conclusions.

What she does offer is an ensemble of gifted performers, including a thoroughly captivating Reinhart, an infectiously vivacious Palmer, and to smaller but no less memorable extent, Cardi B and Lizzo playing variations of the public personas. As she did in ‘Crazy Rich Asians’, Wu brings nuance and soulfulness to her role here, deftly drawing you into Dorothy’s emotional vulnerabilities. Still, there is no question the real star of the show is Lopez, who inhabits Ramona with utter intoxicating magnetism, right from when she struts on stage to Fiona Apple’s ‘Criminal’ till when her scheme goes off the rails – and in case you’re wondering, it isn’t just how sexy she looks, but also how she injects grit and charisma to deliver one of her most grounded and emphathetic roles in recent memory.

To label ‘Hustlers’ a stripper movie is ultimately unnecessarily reductionist, given how it is so much more – on one hand, a smart and bracing true-crime saga that portrays the criminal desperation of working-class individuals who cannot help but feel that the inequalities in society have let them down; on another, it is an electrifying, even exhilarating, peek into a world of control, manipulation and seduction that is hidden from plain sight for obvious reasons, as well as the people whose livelihoods rest on it. You’ll be awed, you’ll be moved and you’ll be captivated by this brassy tale of strippers turned grifters, so bring the dollar bills, because ‘Hustlers’ sure deserves them.

(Brassy and invigorating, this true-crime saga of strippers turned grifters is a vicarious thrill simultaneously rousing, sobering and poignant) 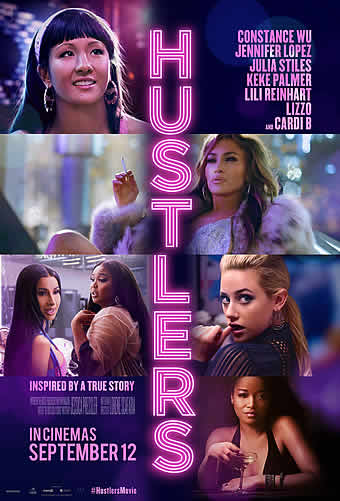