Synopsis: A tender and sweeping story about what roots us, Minari follows a Korean American family that moves to a tiny Arkansas farm in search of their own American Dream. The family home changes completely with the arrival of their sly, foul-mouthed, but incredibly loving grandmother. Amidst the instability and challenges of this new life in the rugged Ozarks, Minari shows the undeniable resilience of family and what really makes a home.

Two months into the new year and we may very well have another Parasite on our hands. Minari is Lee Isaac Chung’s feathery opus, chronicling an immigrant family trying to take root in a new motherland while earning their own particular version of success. It’s a gentle story held aloft by deceptively easy story-telling, yet takes flight from an incredible showing of talent and skill from cast and crew.

The film is an echo of the world we live in today, where a global community is becoming increasingly vocal, claiming identity over social media through cultural ownership. So how does one stay authentic, especially when in a foreign land? Do you identify through ethnicity, lifestyle or ideal? Is there even proprietorship over cultural methods? What parts of tradition do you forsake and what do you keep? Are you ever the same after?

Lee dissects these as one would a beautiful butterfly - tenderly. Revelations here are whispered - personal discoveries that seep slowly like water on dry soil. It is this that keeps the film intimate and yet the audience rapt, and also because the story here is of millions, told through the South Korean Yi family, human to the core.

Steven Yuen is Jacob, the leader of his small family, eager to manifest his dream of a 50-acre farm after growing tired of a tedious stagnating career as a chicken sexer in California. He brings wife Monica (Yeri Han) and his children Anne (Noel Kate Cho) and David (Alan Kim) to the Ozarks, surprising them with a new “house on wheels”, his enthusiasm clouding the resentment from his city-centric wife.

He manages to convince the family to give the new lifestyle a go, but to pacify Monica, has her mother Soonja (Yuh-Jung Youn) moving in from South Korea to care for the kids. This does not sit well with David, who after having to share his room, blurts in a tantrum that the elderly “smells like Korea”. The energetic grand dame is unfazed, and proceeds to try and win him over with her cheeky expressions of love.

Minari sits like a pile of fine threads, with each character pulling on the slowly tightening ball. The pace may be languid, but is helped by the incidental scenes of development and philosophies. “Things that hide are often more dangerous and scary,” Soonja shares to her grandson when he spots a snake at a creek. She could just as well have been talking about each member of the family.

And even at cruise speed and buckled up, the film still manages to serve a heartbreaking crescendo. This might have something to do with cinematographer Lachlan Milne’s poetic work, layering visulas one upon another lusciously. Add in composer Emile Mosseri’s seductive score and you have a vehicle that coos beautifully on all fronts.

The fact that the material has roots in Lee’s own childhood in Arkansas makes this a semi-autobiographical piece. The period is also the same - the 1980s. There are observations here that border on caricature (such as the sheltered church-going locals), but the humanistic details and a wry undertone softens the presumed racism into an ignorance that even comes across charming (as demonstrated by the local kids and evangelical war veteran, brilliantly acted by Will Patton). In an age of trending wokeness and where there’s always someone gatekeeping language and culture, this was a refreshing way to handle the phenomena.

But what Minari succeeds the most, is in expanding the migrant story. Instead of rehashing the rags-to-riches story, or a chest-beating showcase of struggles, it furthers the conversation by sitting us in the now. This is a family that has already “made it”, but is shifting gears to move past survival to create a legacy, and this is a struggle that’s more familiar to today’s audience.

The title references a waterside plant that Soonja brings from South Korea and plants by a creek. It grows effortlessly, this foreign species, when left to its own devices, unlike Jacob’s crop of Korean produce, which only rewards with constant sacrifice.

It’s easy to draw the parallels from there.

(A modest but deeply poignant project. The examination here is poetic and affecting, courtesy of the brilliant filmwork from cast and crew) 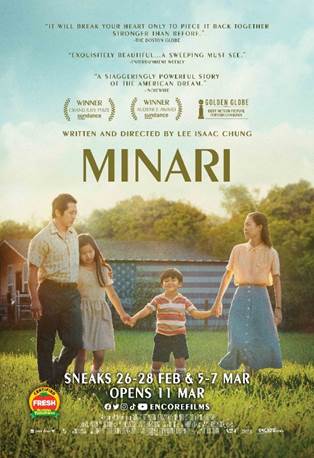