Synopsis: The world’s most lethal odd couple - bodyguard Michael Bryce (Ryan Reynolds) and hitman Darius Kincaid (Samuel L. Jackson) are back on another life-threatening mission. Still unlicensed and under scrutiny, Bryce is forced into action by Darius’s even more volatile wife, the infamous international con artist Sonia Kincaid (Salma Hayek). As Bryce is driven over the edge by his two most dangerous protectees, the trio get in over their heads in a global plot and soon find that they are all that stand between Europe and total chaos. Joining in the fun and deadly mayhem are Antonio Banderas as a vengeful and powerful madman and Morgan Freeman as… well, you’ll have to see.

Not much makes sense in ‘Hitman’s Wife’s Bodyguard’, a slapdash sequel to a mediocre mismatched buddy comedy hit from four years ago. As if convinced that those who have seen the earlier movie would naturally be flocking back, returning director Patrick Hughes barely tries to inject any degree of coherence into his movie, relying instead on the charisma of his star-studded cast to deliver a loud, lazy and profane summer diversion.

When we are first reunited with Ryan Reynolds’ bodyguard Michael Bryce, the once triple-A-rated protection agent has lost his licence and is seeing his shrink to cure the nightmares he has of his former client. Unfortunately, Samuel L. Jackson’s sociopathic hitman Darius Kincaid isn’t doing much better: he’s been kidnapped by the Italian mafia. Of course, that is merely excuse for Darius’ wife Sonia (Salma Hayek) to interrupt Michael’s sabbatical to ask his help to save her husband.

Turns out that Darius’ kidnapper, whom Darius ends up shooting in the head, is an informant for the Interpol, which happens to be tracking the demented Greek billionaire Aristotle Papadopolous (Antonio Banderas). Upset over the sanctions which the EU has imposed on his country, Aristotle plans to hack into a central data junction to bring down its entire infrastructure network. So just like that, the fate of Europe lies in the hands of two bickering frenemies and a ferocious con-artist, although there is hardly any doubt that they would eventually save the day.

As busy as the plotting subsequently gets, it is only window-dressing for the mélange of car chases, gunfights and explosions that is jam-packed into the movie; and that’s not to mention the sky-high body count, with plenty of nameless extras getting killed, often with their brains splattered. Indeed, the mayhem is particularly over-the-top, and you should know that Hughes wears the honour of his movie being probably the most violent movie you’ll see in the cinemas this summer proudly on his sleeve. And yet all the excess frankly gets tired pretty quickly, not least because Hughes doesn’t bring much gusto to the action.

Neither for that matter does Hughes bring much inspiration to the set-up, and the same can be said of his screenwriters (including returning writer Tom O’Connor, and brothers Brandon and Philip Murphy). Whereas the first movie had moments of comic brilliance, such as a fun sing-along with a group of nuns or Hayek beating up goons to Lionel Ritchie’s ‘Hello’, this sequel seems content to simply rehash its predecessor’s glories, so much so that both the nuns and Ritchie’s song make a comeback but to diminishing effect. It also mistakes vulgarity for levity, to the extent that we’ve lost count just how many times the word ‘motherf**ker’ is uttered.

That said, no one does badass like Jackson does, and even though he has done this thing 100 times, it is still as entertaining as it is in its own right. Jackson also still has a blast emasculating Reynolds, and while the latter is cast here as the straight man, the duo radiate the same infectious chemistry as they did in the first movie. This time though, Hayek steals many of the scenes playing a sociopath as foul-mouthed as her husband, the actress leaning into the ridiculousness of it all with such unbounded energy that we haven’t seen from her in a while.

Perhaps the only ingenuity that we found in this sequel is with the introduction of Michael’s stepfather Bryce Senior (Morgan Freeman), who used to be a top notch bodyguard himself and had taught the younger Bryce the tricks of the trade. Not only are the scenes between Reynolds and Freeman refreshingly offbeat, the story also finds ways to make Bryce Senior more than just a glorified cameo in the larger scheme of things; and at the grand age of 84, Freeman shows that he’s still got some good old wily surprise to boot.

Frankly, with such a killer cast (pun intended), you’d probably wish ‘Hitman’s Wife’s Bodyguard’ was a lot better than it would turn out to be; and we can say we’d certainly had expected more. Yet those looking for some summertime Hollywood escapism will find this frenetic action comedy adequately breezy, carried from start to finish by a dynamic trio of actors who give it their all and fire on all cylinders. It’s a definite notch down from its predecessor, but if you’re content to have a blast with Reynolds, Hayek and Jackson, you won’t begrudge ‘Hitman’s Wife’s Bodyguard’ (yes, we’ve listed the cast in that order) for being as utterly trashy as it is.

(One star each for the star power of Ryan Reynolds, Salma Hayek and Samuel L. Jackson, who give it this by-the-numbers action comedy their all, despite a less than inspired setup) 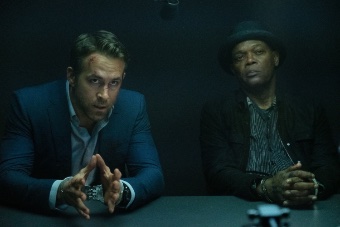 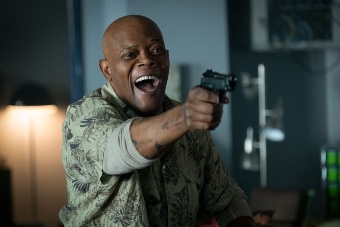