Synopsis: An adaptation of the comic book about a spectral police force. Written by Peter M. Lenkov, the 1999 comic centers on the Rest in Peace Department, the dedicated yet dead police officers who patrol the dead beat, made up of the deceased who refuse to go quietly. The story focuses on a cop who joins the department after being murdered and his search for the man who set him up as he does his duty fighting fiendish creatures.

If you ain’t familiar with Jeff Bridges, you certainly will be by the end of ‘R.I.P.D.’. As the drawlin’, rootin’, tootin’ cranky Wild West marshal Roycephus Pulsife (or Roy for short), Bridges is a hoot, and undoubtedly the best - even perhaps the only - thing that this CGI-bloated, 3D-infused paranormal buddy comedy has going for it. A rehash of his Rooster Cogburn role in ‘True Grit’, Bridges throws himself into the part with such comic abandon that it is hard not to be swept away by his roguish charm.

The same however cannot be said of Ryan Reynolds, whom Bridges is paired up with in the titular Rest in Peace Department to catch members of the dead masquerading as the living (known as ‘Dead-Os’). Playing a fellow lawman separated by 200 years of history, Reynolds’ Boston cop Nick Walker is bland to the point of boring, lacking even the affable charm that one has come to associate with the actor. Next to Bridges, Reynolds is often seen either speechless or struggling with a poor retort, so much so that what passes between them isn’t as much banter as it is Bridges’ garbled-lilt monologues.

In adapting Peter M. Lenkov’s Dark Horse comic for the big screen, ‘Clash of the Titans’’ Phil Hay and Matt Manfredi recycle the old pro/ young hotshot setup of many of a buddy cop comedy and certainly the most obvious ripoff ‘Men in Black’. From a brief scene where Nick and Roy are chasing an oversized man-monster giant down the streets of Boston, we are catapulted ‘three or four days’ into the past to observe how Nick’s cop with a conscience is betrayed by his partner Bobby (Kevin Bacon) on a meth bust and recruited into the R.I.P.D. by the wise-cracking Proctor (Mary-Louise Parker).

The story unfolds in utterly predictable beats, with Roy showing Nick the ropes of the after-dead police work at the beginning and Nick impressing Roy subsequently with a resourceful thing or two of his own (yes, you can bet Nick eventually earns the handshake Roy denied him at the start). Not to mention that Nick gets to settle his score with Bobby - despite being dead - when it turns out that the latter is involved in some kind of scheme with the Dead-Os to open a portal for the dead to enter the world of the living by reassembling some ancient totem called the Staff of Jericho.

There are some moments of inspiration though. A running gag centres around the guises adopted by the officers of the R.I.P.D. among the living - in particular, Nick and Roy in the form of the mismatched duo of an old Chinese man (veteran actor James Hong) and a blond bombshell (model Melissa Miller). Another has the Dead-Os drawn out of their human disguises by Indian spices. Such flashes of brilliance however are however few and far in between, and one can’t quite help but feel that the film is otherwise underdone and underdeveloped.

If director Robert Schwentke is aware of the script’s deficiencies, he certainly does little to compensate in the action department. In spite of the plentiful car crashes, gun battles and explosions, the film feels frantic rather than exciting. The visual effects also look cheap for what is supposed to be an expensive Hollywood summer production; in fact, the computer-generated deados look silly and cartoonish, even less convincing than that in the ‘MIB’ series done some fifteen years ago. And let’s not even begin with the 3D, which tacked on during post-production, is completely superfluous.

For a film with an acronym as its title, there are unfortunately many others that can be associated with it. D.O.A. would be one such apt descriptor, considering its reception Stateside among both audiences and critics alike. Then there’s R.I.P., which is likely to be its fate given how dull it is.  And while we’re at it, you might as well add an ‘OFF’ there, since it pretty much borrows from every other supernatural action comedy that’s been done, including ‘Ghostbusters’ and of course ‘MIB’. Like we said at the beginning, there is but one redeeming factor here - but even the six-time Academy Award nominee and one-time Academy Award winning Best Actor can’t quite rescue this comic book movie from the second-rate bargain basement it belongs.

(Jeff Bridges’ Old West lawman act never gets old, but every other bit of this second-rate comic book movie from plot to action to character feels recycled and dull) 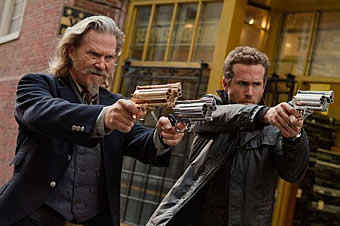