Synopsis: Keanu Reeves stars as Evan Webber, a happily married architect who appears to have everything a man could ever dream of – a loving and successful wife, two beautiful children and an expensive home. During a weekend alone, his peaceful existence is interrupted by the sudden arrival of two lost and seemingly innocent young girls. After naively inviting them in while they wait for a taxi, the night takes a sudden and disturbing turn when a debaucherous mistake evolves into a living nightmare.

The storyline unfolds with a too good to be true kind of happy day where the Webbers look like they are from an Ikea catalogue page. Everything goes fine until, an ominous knock was heard coming from outside on a rainy night. And there stood Genesis (Lorenza Izzo) and Bel (Ana de Armas), the nubile duo who looked like the damsels in distress in the most unsuspecting way. Happily married and a father of two lovely kids, Evan Webber (Keanu Reeves) was trapped between the whorish devil and the deepest blue sea.

There were well-written roles to fit everyone perfectly into the plot (if there was any to start off with). No one could have played it better than Reeves but on a second thought Liam Neeson would have been an ideal choice too except that it would make him look like a pedophile given his age and voice. Reeves’ role as a loving husband challenged to be unfaithful jerk hubby, nominally frames the movie. The plot that organically comes together when Reeves is left alone at home, revolves around this wholly believable central character who is trapped with the sirens of the night in the same house that is meant to be the most holistic place in his life.

(Watch this movie if you had liked: Misery, The Loft, Chloe and Plush) 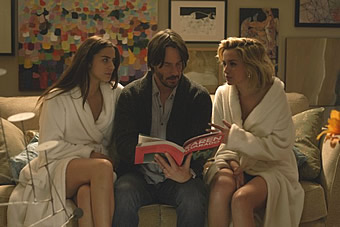