Synopsis: During the early days of World War II, with the fall of France imminent, Britain faces its darkest hour as the threat of invasion looms. As the seemingly unstoppable Nazi forces advance, and with the Allied army cornered on the beaches of Dunkirk, the fate of Western Europe hangs on the leadership of the newly-appointed British Prime Minister Winston Churchill (Academy Award nominee Gary Oldman). While maneuvering his political rivals, he must confront the ultimate choice: negotiate with Hitler and save the British people at a terrible cost or rally the nation and fight on against incredible odds. Directed by Joe Wright, DARKEST HOUR is the dramatic and inspiring story of four weeks in 1940 during which Churchill’s courage to lead changed the course of world history.

No feature-length film could hope to portray the storied life of Winston Churchill, one of the greatest British politicians in living memory, and thankfully this latest biopic of the former Prime Minister who led the country through the unparalleled tumult of World War II does not dare try. Instead, it focuses squarely on the first six weeks of his tenure, where he must decide whether Britain should fight the Nazi threat alone or pursue some kind of negotiated peace on Adolf Hitler’s terms. It was indeed a pivotal moment in history – after all, France had already fallen to the German army, and more than 300,000 British troops were trapped on the beaches of Dunkirk. Churchill found the very idea of surrendering to Hitler repugnant, but the pacifist members of his own Conservative Party as well as his War Cabinet thought otherwise, creating the sort of political gridlock that could very well make or break victory.

That history would prove Churchill right is a foregone conclusion, but an artful screenplay by ‘The Theory of Everything’s’ Anthony McCarten depicts vividly how Churchill overcame not only his conspiring rivals Neville Chamberlain (Ronald Pickup) and viscount Halifax (Stephen Dillane) but also his own self-doubt to whip up the national will against Hitler’s tyranny. The latter is credit too to Churchill’s wife graceful yet resolute wife Clemmie (Kristin Scott Thomas) as well as his quietly empathetic secretary Elizabeth Layton (Lily James), both of whom provide immeasurable emotional support to the embattled leader. Their interactions with Churchill are absorbing in the way they display his inner character, revealing a statesman far more complex than his oft-depicted extreme temper and excessive habits for alcohol and tobacco would suggest.

These intimate scenes are perfectly counterbalanced with the larger unfolding political drama and national threat, which director Joe Wright stages with gripping urgency. You can literally feel the seething political tension from the charged discussions within Churchill’s War Cabinet debating the practicality and wisdom of peace talks with Hitler, as well as the military stakes of Churchill’s risky plan to rescue the troops at Dunkirk by way of sending in another 4000 men from a nearby garrison and commissioning the use of civilian boats to cross the English Channel. Even without the theatre of the rescue itself, there is plenty of visual flair in the movie itself – together with his cinematographer Bruno Delbonnel, Wright uses a combination of overhead shots, elaborate tracking sequences, dramatic chiaroscuro lighting and more to give his historical drama scenes of impressive cinematic beauty and excitement.

But ‘Darkest Hour’ wouldn’t be what it is without the towering portrayal of Gary Oldman as Churchill, who with the help of Oscar-nominated makeup artist Kazuhiro Tsuji disappears into the signature portrait of the man with the famous jowls, retreating hairline and John Bull countenance. The achievement however cannot just be Tsuji’s prosthetics, but rather how Oldman captures the many nuances of Churchill’s demeanour and personality. Oh yes, the trademark irascibility is all there, but tempered by wit, compassion and authenticity, so that one understands his considerations, dilemmas and motivations. In Oldman’s Churchill, we sense not just his determination amidst sheer adversity but also his inner anxiety and trepidation still lingering from his catastrophic term as Lord of the Admiralty in World War I – and the fact that Churchill’s classic speeches sound as stirring as if we’re hearing them for the first time is testament to Oldman’s consummate performance.

Next to Christopher Nolan’s visceral – and equally, if not more, outstanding – ‘Dunkirk’, ‘Darkest Hour’ acts as a literal complement, illustrating the tense and fraught circumstances surrounding Operation Dynamo and that definitive ‘never surrender’ speech. It is therefore entirely befitting that the movie closes with the following quote: “Success is not final, failure is not fatal; it is the courage to continue that counts’, which itself gains newfound resonance in light of Churchill’s own personal struggle in those crucial six weeks in May – June 1940. And yes, even without the threat of imminent war today, it is a reminder of the power of oratory to inspire, uplift and rally a population, as well as the value of bipartisanship for the good of the nation. Those may be trying times all right, but ‘Darkest Hour’ is rousing, not least because it has Oldman’s illuminating performance.

(Gary Oldman gives a towering performance as the great Winston Churchill, and the film itself is a literal, but no less gripping complement to this summer's viscerally thrilling 'Dunkirk') 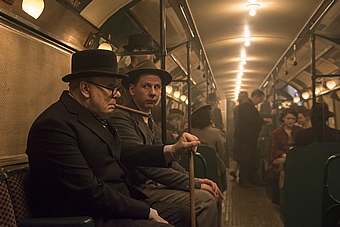