Synopsis: Before Peter became Pan and Alice visited Wonderland, they were siblings (Jordan Nash and Keira Chansa) living in an idyllic country home with their parents (Angelina Jolie and David Oyelowo) and their older brother, David (Reece Yates). In this magical place, they are free to play and let their imaginations run wild as they romp around the nearby forest. However, change is in the air as their priggish aunt, Eleanor (Anna Chancellor), who is extremely critical of how the children are being raised, has arranged for David to attend a prestigious boarding school. As the family strives to accept David’s imminent departure, a deadly accident shatters their wondrous lives. With their family falling apart both emotionally and financially, Alice and Peter decide to find a solution. They travel to London to sell a family heirloom and soon find themselves in a dark, mysterious, and dangerous underworld that propels them on an adventure that will change the course of their lives. Featuring terrific performances and storytelling, Come Away is a delightful origin story for two of the most beloved characters in literature.

‘Come Away’ may promise an intriguing fantasy built upon the worlds of J.M. Barrie and Lewis Carroll, but this Christmas fantasy adventure is anything but transporting. Instead of a engrossing ‘what-if’ should Peter Pan and Alice (of Wonderland) be siblings, what we are presented with is a dreary melodrama that feels more like an indigestible lump of coal.

On paper, screenwriter Melissa Kate Goldhill’s premise must have sounded promising: an alternative origin story for both well-established fictional characters by way of Charles Dickens’ formula of family tragedy, grief and abandonment. Yet the plotting, as well as the execution by director Brenda Chapman (of Pixar’s ‘Brave’), proves disappointingly muddled, comprising random events cobbled together without much sense of coherence or purpose.

That first turning point comes when the oldest child of the once carefree Littleton household David (Recce Yates) dies in a freak accident, leaving both Jack (David Oyelowo) and Rose Littleton (Angelina Jolie) devastated. While Rose withdraws inwards, Jack externalises his grief by falling back into his old habit of gambling. On the other hand, the younger kids Peter (Jordan A. Nash) and Alice (Keira Chansa) land up meeting a hodgepodge of eccentric characters, while going on fanciful trips to Neverland and Wonderland.

Those familiar with the stories of ‘Peter Pan’ and ‘Alice in Wonderland’ will have a field day playing ‘spot the references’ – the obvious ones include the tea parties which Alice holds for her beloved stuffed rabbit, the make-believe swordfights that Peter and David have on board a pirate ship, a goofy mad hatter (Clarke Peters) spouting the Hatter’s riddles and famous lines, and a soon-to-be-handless Captain James (David Gyasi) whose fate would be handed down by a crocodile (get the Hook?).

There is no doubt the details were engineered specifically to provide clear origin points for the iconic elements of the stories, but the circumstances by which they are woven into the story are deliberate and ultimately contrived. It doesn’t help at all that they are too utterly blatant, as if the filmmakers were afraid that the discerning ones would be devoid of any ability to appreciate nuance.

That also results in a narrative begging for better continuity, than one which flits from vignette to vignette without developing each to any meaningful depth, even if these episodes are stuffed with such indelible talents as Peters, Michael Caine (as a shadowy underworld character from Jack’s past) and Derek Jacobi. Oyelowo and Jolie are seasoned enough performers to try to make the best of their thinly written parts, but both Nash and Chansa seem at a loss of what to do with their respective characters.

Despite a somewhat impressive Victorian-esque setting, including of London, ‘Come Away’ is an adventure sadly devoid of the sort of magic it promises. The proposed mash-up of ‘Peter Pan’ and ‘Alice in Wonderland’ may sound fascinating, but what follows is dull, leaden and grim, offering little of the escapist pleasures that its inspirations did. You’re better off revisiting those classics, than waiting for anything wondrous to come from this awkward mix of fantasy and reality.

(There is little joy, wonderment or fulfilment to be found in this dreary mash-up of 'Peter Pan' and 'Alice in Wonderland' by way of a Dickens-style tale of tragedy, grief and abandonment) 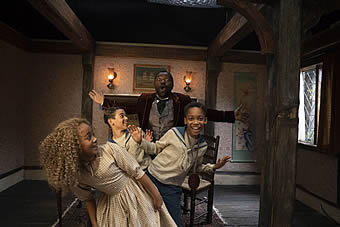 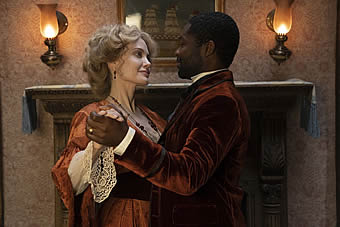 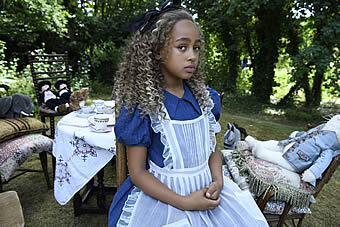 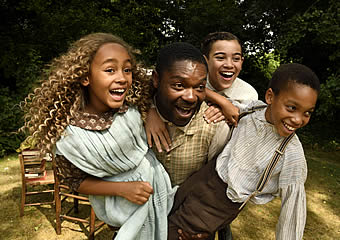 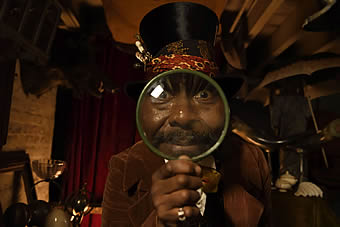